Do you consider Terence Hill’s Lucky Luke from 1991 as a spaghetti western? It’s not that good but I guess it might be considered as a Spag Western…

Also Bruckner got it in his spag western bible

Yes, i would also, did you know there was also a tv series

yeah seems cool, I saw these in a video store years ago… The 80’s cartoon were very good, the “new adventure” are not that good…

Are the cartoons French?

i liked those. i mean they were good stuff for kids

I guess they are French, I’m a Québécois so I saw them in French…

Do you know if that Terrence Hill series exist in DVD?

Do you know if that Terrence Hill series exist in DVD?

I have some of them on dvd (never got round to getting them all) , they are on a cheap label in U.S., not that great quality and also they are only one episode per disc.

I have some of them on dvd (never got round to getting them all) , they are on a cheap label in U.S., not that great quality and also they are only one episode per disc.

How many episodes are in those series?

How many episodes are in those series?

i don’t know how many there were, but i’ve only got 3

I remember watching this series when I was a kid but I didn’t like it much then.

I cant read it now,but when i was kid i realy enjoy Lucky Luke comics.


First and last album by Morris

Some website and info in english about Morris
http://www.geocities.com/Paris/Cafe/2877/luke/luke.html

Maurice De Bevere (French pronunciation: ​[mɔʁis də bəvɛʁ, moʁ-]; 1 December 1923 – 16 July 2001), better known as Morris, was a Belgian cartoonist, comics artist, illustrator and the creator of Lucky Luke, a bestselling comic series about a gunslinger in the American Wild West. He was inspired by the adventures of the historic Dalton Gang and other outlaws. It was a bestselling series for more than 20 years that was translated into 23 languages and published internationally. He collaborated fo... 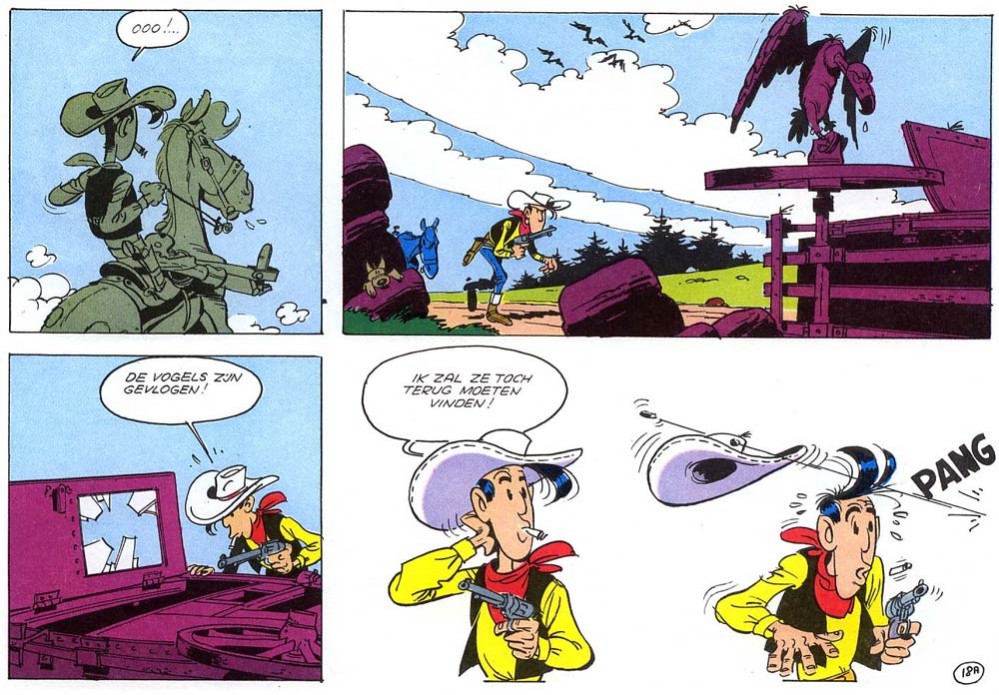 The Belgian author Morris is best known for his humorous cowboy series 'Lucky Luke' (1946), whose adventures he has drawn for nearly his entire career. Together with René Goscinny he made a funny satire of the western genre,...

And a very complete one in french
http://www.bangbangluckyluke.com/

I saw this movie about 17 years ago when I was on an exchange program in Germany. I honestly forgot about it until a year or so ago when I started getting into Hill’s movies.

I loved the comics and I really liked the animated TV Shows and the animated Movies. But Terence Hills Lucky Luke doesn’t really impressed me. Terence didn’t looks like the Lucky Luke in the Comics and the same problem is with the Daltson. Weren’t parts of the movie also in the TV Show?

The LL comics which were written by Rene Goscinny (37 albums between 1956 and 77) are still good, often very good. Intelligent and parodistic, recommended to all (not only kids).

I love(d) the comics, maybe even more than Asteriy which were my only childhood comics. But the movie was pretty bad in my eyes. If it qualifies as a spaghetti western, than its one candidate for the worst SW you ever saw. No justice at all to the comics, that might have been a bigger influence on me liking the western than Karl May and the winnetou movies. Lucky Luke was the man, my sister is keeping our collection of lucky luke comics.

Do you consider Terence Hill’s Lucky Luke from 1991 as a spaghetti western? It’s not that good but I guess it might be considered as a Spag Western…

I watched this a couple of days ago and it has to be the most disappointing Terence Hill western that i’ve seen.The other western Hill made with Bud Spencer about the same time THE FIGHT BEFORE XMAS aka TROUBLEMAKERS is far superior,heartwarming but full of fun.I saw the opening credit sequence on Youtube for LUCKY LUKE thought it was pretty good with Hill hilariously trying to outdraw his shadow on a rock but this is probably the best thing about the movie.

Lucky Luke looks exactly like Hills MY NAME IS NOBODY character but thats where the similarity ends because Luke very boringly plays it totally straight leaving all the (barely funny) jokes to his talking horse sidekick.A dull and predictable storyline annoyingly intercut in places with footage of the modern world there’s not much good you can say about it really apart from a bit of Morricone from MNIN and BIG GUNDOWN which with added Leone gun duel camera angles leads me to conclude that this should qualify as a sw albeit a poor one.

Hill has his horse doing the jokes in this, whether you will find them funny is another matter. One of those westerns where people just look a little to clean looking, and especially their clothes. When someone does look a little on the dirty side, it just comes across a little false. Hill made a good move not taking his hat off in this for the most part, as his hairstyle looked crap. The music from The Big Gundown did not fit in this film. I am sure some like this one, but I am not one of them.

Yeah, the comics were good (I still read them), they parodied westerns excellently (especially the Lucky Luke book “Stagecoach”), and can be enjoyed by all ages (but it helps if you watch westerns).