I saw this movie when I was probably 7 or 8 or 9 in the early 90s that had a real low budget grainy look to it with hideous washed out technicolor (budgetcolor). It starts out with an old cowboy visiting either a rock grave or cactus with a skeleton in the center then the movie flashes back to when the man was younger with either a band of outlaws or cattlemen out on a trail and they’re all being offed one by one by a pissed off Indian.

I remember one scene a guy is hanged upside down over a slowly rising river and he’s doing some cheesy stream of consciousness “mother help me!” 60s style acting until his head is under water, it felt like it went on forever. I think at the end the Indian’s woman shoots her man in the back cause, I dunno, movie ends with the old man walking away from the bones, we stay with the bones, freeze frame to 60s style creditless ending.

Now this is all from early fuzzy vague memory, this might be a well known film but I doubt it, it had a raw sloppy style and was helluva easy to watch as I hated westerns until I was 14. It was like a strange slasher movie of sorts.

Thinking betterly nowly about the film’s style, it seemed more like Roger Corman biker/freak-out! type of film than a spag western.

I could be wrong, because my memory of it is vague, but I think the film you are describing is WINTERHAWK (1975) by independent producer/director Charles B. Pierce. It was certainly low-budget. He four-walled the film across the USA and made a lot of money out of it. Enough to continue producing and directing several other films, some of them hits.

WINTERHAWK has never been released on home video, that I know of. 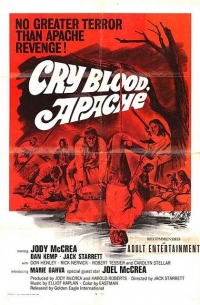