For the many years I’ve been watching these films and there is one set/location that really stands out to me and has always sparked my curiosity. The set is a fort with statues that look more Incan or Mayan rather than Aztec. It is featured prominently in “Requiescant” and the highly under rated “Blood At Sundown” pictures. Can anyone help? I assume the set was constructed in Spain but after the location trickery of such films as “Massacre Time” and “My Name Is Pecos” one can never be too sure.

I believe it’s also in Killer Kid as well. I think it might actually be in Italy, since Killer Kid was one of those “Italy doubles as Mexico” films. Note how in Blood at Sundown, the front of the fort is usually shown via a pulled back matte shot. 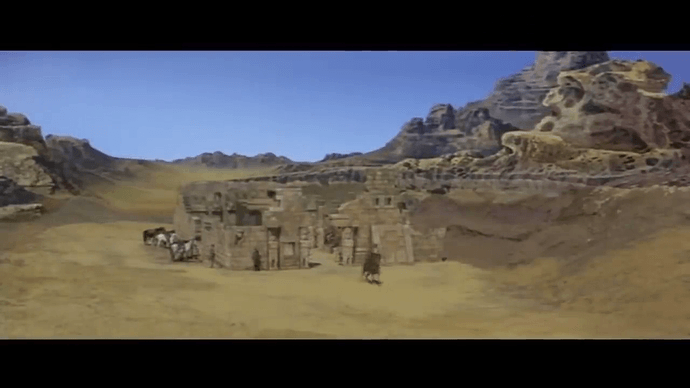 I think you could not rule out that the manipulated, matte shot, in Blood At Sundown could be based on a location at or near La Pedriza - Manzanes el Real, north of Madrid city.
At least I got that feeling some time ago. It was the rock formations that led me in that direction.
In that case it is shot rather near the final scene in El Rojo for example.

Here is a screenshot from Blood At Sundown where they used a non-manipulated location at La Pedriza. I think the terrain there reminds of the scene with the matte shot

That is the one! Seeing this particular screenshot reminded me that this was one of the rare euro westerns to feature a matte painting. If my memory serves me right there are also matte paintings in such films as The Deserter, Death Sentence and one of the MacGregor films.

Thanks for the information runner, I believe you may be on to something.

Bava loved a matte shot too. There is definitely one in his Road to Fort Alamo. I think possibly the earliest use of one in a Spaghetti western

Yes, Bava used matte paintings quite often in his Spags, which otherwise were very rare in the sub-genre. Usually the Italians preferred cheap gavel pit locations instead of matte paintings or studio location shots for outdoor scenes.