Ayoung boy named Gary is kidnapped by seven masked men and a ransom of $20’000 is demanded of his mother. She duly rushes into town (where she is spied upon) and empties her bank account, unwitting of the fact that things aren’t going to go as smoothly as she thinks. Enter Fred (Brett Halsey), a dishevelled drunk who attracts the scorn of pretty much everybody, including the local sheriff and his deputy. The sheriff reveals that Fred was once also a Lawman and flashbacks seem to suggest that he sank into alcoholism after accidentally causing the deaths of his wife and son. Fred is tempted by the lure of a bottle of whiskey, into going to collect the ransom money from the boy’s mother. His suspicions are raised when she questions him about her son, something he wasn’t made aware of and which does not sit well with him. To make matters worse, on the ride home he and the gangmember he gave the money to are ambushed. The other man is killed and the money is taken. All fingers point to the hapless Fred. The rest of the gang think he stole the cash while the townspeople believe he is the kidnapper - so it’s time for him to sober up, find out what’s really going on and redeem himself by rescuing the boy.

Another one I’d wanted for some considerable time. Dug the theme song, and the rest of the score was not bad. The lack of English again did not cause the film to be confusing, although there were a lot of twists and turns and double crosses and of course a surprise villain (moderately more surprising than the one from Wrath Of God). The kid wasn’t too annoying either, for once. Some parts of the film had a slightly "gothic"feel to them - red mist in the woods and a use of lighting on people’s faces that was more akin to old horror films. Overall another enjoyable viewing but again, it would be nice one day to find an english or subbed version…either that or take a crash course in Spanish.

I like Halsey, Lacerenza’s score and some gothic scenes but otherwise this is quite slow-moving film with little action. It’s been some time since I last watched this but I remember it having few strange scenes with Halsey riding in Spanish locations and wearing black dress… could they be leftover scenes from L’Ira di Dio? Fernando Sancho does not do his usual one-man circus which is disappointing. 5/10

I like Halsey, Lacerenza’s score and some gothic scenes but otherwise this is quite slow-moving film with little action. It’s been some time since I last watched this but I remember it having few strange scenes with Halsey riding in Spanish locations and wearing black dress… could they be leftover scenes from L’Ira di Dio? Fernando Sancho does not do his usual one-man circus which is disappointing. 5/10[/quote]

Damn…i had this sneaking suspicion that was the case! Thanks for the correction

I don’t think there were leftover scenes from L’Ira Di Dio in this one though, as Brett Halsey had a different outfit on, plus no hat etc. Maybe they were made back to back though…same director/Star/Year/some supporting actors. I like Halsey a lot too…pity he didn’t do more SW’s, particularly ones like this and Wrath of God…but perhaps not along the lines of Roy Colt!

Enjoyed this one quite a bit. Cardone is a master at making the most of modest resources in my opinion and this one, like Wrath of God, is a great example of that talent. I’ll be writing a review shortly.

As an aside, I checked the details in the DB and found Aurora Battista listed in the cast. She is most definitely not in this film and a quick check solved the issue. She appears in the other spaghetti by Cardone with the almost identical name, 20.000 dollari sul 7. I’ve mixed these films up before myself so I know how easy it is to do. Anyway, I’ve corrected it now. 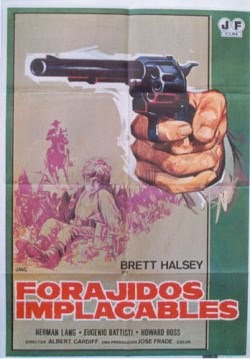 Nice reading. I enjoy it, although the red fog in the forest seems weird to me. The locations sequence is awkward too (forest’s green vegetation >> austere desert). A trademark perhaps. ???

Nice reading. I enjoy it, although the red fog in the forest seems weird to me. The locations sequence is awkward too (forest’s green vegetation >> austere desert). A trademark perhaps. ???

Yes, the red fog is kind of weird but I must say I liked it none the less. Strangely atmospheric and of course unreal.
As for the switch between green and sand, well yes, something of a trademark for many westerns shot alternately between Almeria and Rome ;D

I have mixed feelings about this one. I enjoyed bits of it, but it was sooooo slow. I’m usually a bit of a fan of slow moving spags - Night of the Serpent, Bullet in the Forehead, to name but two, but this one simply became a trifle, well … boring. I thought Brett Halsey was ok as the drunk ex-sheriff with demons, and he looks like a good sw protagonist, but the whole thing got a bit repetitive, with him being captured, escaping, being captured, escaping … and so on.
Somewhere in here was a better film. I liked the red misty bits, and Phil is right about Cardone doing quite a lot on a little - but this could’ve simply have done with a bit more action. After seeing the rather good Wrath of God recently, and enjoying that, I’d hoped for more. Half marks only.

The rest mist attracted my attension at the start. Kid did not annoy me in this good looking western. Liked Halsey as a former lawman who has a little bit of drink problem. Few people get hit by the end of a rifle butt which always sticks in my mind in a western. The story reminded me of one from an Italian crime film, and simple one for me. Not viewed Wrath of God yet, so will be interesting to see what I think of that one.

Oh, what a surprise.
I’m not the biggest fan of Cardones Western.

But Kidnapping is good.
The beginning, with this red fog. Good and very surreal. Then Sancho and his gang. They surround the child. Her face is obscured. Thus, a really dense atmosphere is created.

The film is told very calmly. In the first part are no shootouts. And I give Ennio right, the film is reminiscent of a crime film.

To the recurring fear of the mother for her child.
And the ex-Sheriff, an alcoholic. He has no principles more. His illness has destroyed him. And it is no matter how he comes to his drug. It offers itself for the ransom handover. Only with time, he looks the situation.

Overall, I felt entertained. For me, the film is better than the much better know Seven Dollars On The Red.

A word about the Fandub: Terrific. I thank all the fans who make this fandubs. Impressive work, Amigos. You are the true heroes for us fans.

Watched this one for the first time and found it not to be that bad. To be honest, this is a slow moving western but never boring. What I liked about it, was the premise of the story. Bret Halsey is good as an ex- drunken sheriff who gets involved in a boys kidnapping and doesn’t disappoint. Not much gunplay but I didn’t mind it, it has some nice landscape locations and title score is not bad either. Good for a watch, for sure. 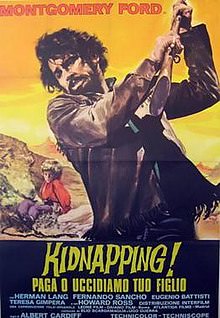 I just see Mo Salah every time I look at this poster.

Haven’t watched this one in a while but remember it being quite good. I have an English subtitled version if anybody wants to trade.

The cast page has been created. @JonathanCorbett, do you know if these guys appear in this film?

these guys appear in this film?

I don’t see any physical similarities to them, and not even the right age, among the few unknown actors: man behind Andrea Fantasia shortly before the stoning, a couple of night guards, 3 or 4 bandits, cemetery guy (even though there’s no clear shot of the face in this latter case).

Great review ! enjoyed it mate. also enjoyed reading about yourself and the love of the western. Reminds me of myself, horse and all. DJANGO KILL is also in my favorites list . Enjoy reading your reviews . A lot are really very impressive by the way.My hat goes off to you sir.

Glad you enjoyed the review @SCOTTY
It happens that I’ve just this afternoon finished writing an updated one for the database as part of the film’s “Film of the month” revamp. It has similarities with my original one but written with a fresh eye after recently re-watching the film. If anything, I like the movie more now than ever and really felt that Halsey shines in it.
https://www.spaghetti-western.net/index.php/Kidnapping_Review

This one goes right into my list for the upcoming spagvember. But are there english subs or audio available?

Must be one of the few (well, not too many) spaghs I’m not familiar with. The story doesn’t ring a bell and I haven’t placed reaction (before this one) in the film’s thread. See if I can find a copy.