Western fans who love comic books may want to check out DC Comics new version of their classic character. Story by Justin Gray and Jimmy Palmiotti and some great artwork from Luke Ross (cover the scarred part of Hex’s face and see our main man Clint Eastwood) The Book is about a bounty hunter in the years following the Civil War. Its one of the best new comics I’ve read in years. And for those of you interested in the original “Jonah Hex” stories DC has also published a 500 page reprint volume called “DC Showcase Presents: Jonah Hex”. It collects dozens of early 1970’s “Hex” comics. Some mighty fine reading, check it out.

I concur about Jonah Hex. Great character, and a fine book. I stopped reading when 52 hit, though.

And DC is supposed to be releasing a second Showcase volume.

I recommend it, too.

Agree with Bronson re the newest Jonah Hex title, “All Star Western”. OK, DC, you’ve got arguably the most famous modern western comic book character, you’ve got a modestly successful critically-acclaimed reboot of the JH title for the 21st century crowd…

…And you screw that up by ditching the new Jonah Hex title and moving the west’s greatest comic book bounty hunter to Gotham City so he can play at being a 19th century Batman.

I put up with this “fish out of water” business for the first year, but when it became clear they weren’t going to actually live up to that All Star WESTERN title I gave up on it. Came back a couple issues later for the Vandal Savage appearance. Stuck around for the brief foray westward – albeit with spandex boy Booster Gold.

And then it turned to complete shit by bouncing Jonah into modern day Gotham.

Goodbye All Star Western. Call me when you decide to head back west – and I mean the 19th century west.

(You’d think these clowns would have learned from the 1980s situation where they cancelled the Jonah Hex title and sent Jonah into a Road Warrior-type future setting. That lasted 18 issues. If it weren’t for the Gotham/Batman tie-in the current turkey wouldn’t have made it that far…)

Surprisingly, I enjoyed the post-apocalyptic HEX series. It was goofy fun.

But I can’t get into the new book. Like I said, I dropped it with 52 and haven’t looked back. At least I have the trades of the last series to keep me company. Those were really good.

Anyone seeking the good old Jonah Hex comics should be advised there’s a new Showcase collection (vol. 2) of his last few appearances in Weird Western Tales and the first 20 or so issues of his own title, from back in the 1980s. The Showcase volumes are big 500+ page collections of original appearances, albeit here in black and white. Some REALLY good stuff here – some of those early WWT stories in Showcase vol 1 are excellent.

For those seeking a more modern take on Hex, there’s a new volume coming out this week (I believe called Shadows West?) that collects all three of the Joe Lansdale/Tim Truman/Glanzman miniseries from the 1990s: Two-Gun Mojo, Riders of the Worm and Such, and Shadows West. While I enjoyed the hell out of Two-Gun, and Riders started out well, they quickly degenerated into an endless parade of juvenile humor, which continued into Shadows.

If I had to choose one or the other, I’d obviously go for the Showcase.

All star western comes to an end soon at issue 34 , am sorry to see Jonah go since 2005 he’s been a favorite, yea when the Jonah Hex title got rebooted to All Star western it was not as good but still had the same writers all the way through, plus if you know your old Hex books from the 70’s/80’s All Star western ties into them …

I started picking up the new All Star Western again recently when Hex returned to the old west. Imagine my initial confusion and subsequent disgust when it was revealed that while in the present-day Hex’s facial scars were completely removed via plastic surgery.

I kept reading the last two issues because supposedly they’re setting up a confrontation between the time-travelling Hex and another scar-faced individual who’s been using his name and committing heinous crimes in his absence. But the writing on these issues has frankly been awful, and the hinted meeting of the Hexes can’t come fast enough.

In short, I’m not sure I can even make it to the end of this series, but in any event it’s good to see it gone if this is how it was going to proceed.

Well u should definitely stay around to the end 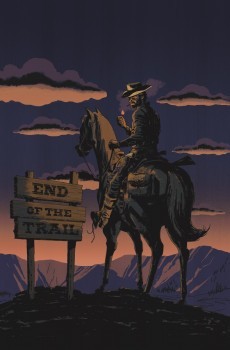 Darwyn Cookes Doing the art for the last issue

And it will be a great send of 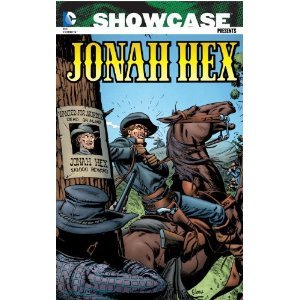 I have nothing to comment on the commics (didn’t know they existed), but has anyone seen the movie on Jonah Hex? I can’t say I was impressed by it, in fact I didn’t even watch more than the first twenty minutes or so. A western movie trying to mix the old style with 3D and comics (and a bit of Poe too I suspect) just didn’t work for me.