The Koch DVDs for both of these are great (I love the compositions on the beach in JOHNNY HAMLET) but I’d also like to hear the English tracks. DEATH SENTENCE has English credits as an extra so I’m assuming an English track was made. Is it lost or is the English version edited differently. I think I’ve read that JOHNNY HAMLET was in English on one of those OOP Japanese box sets.

Don’t have the Japanese release myself but apparently it only contained the Italian dub.

the Kochs have english subtitltes though

There is a fan version of Johnny Hamlet in English language.

There is a fan version of Johnny Hamlet in English language.

where? i prefer the english version better, i don’t like gilbert roland spoke italian

I think maybe in the Death Sentence film topic, there is a fairly lengthy discussion as to whether or not an English track exists for Death Sentence… from what I remember, the assumption is that the track is lost

Apparently there’s a Franco Cleef fan-made version with (original) English dub. I noticed a copy of it listed by an Amazon seller once, & hesitated about buying it because it was a little more than I wanted to pay for a pirate disc. When I checked it again a few days later it was sold, & I’ve regretted it since as I found I couldn’t get it or any other decent copy with English dub anywhere else.

If you’re determined to get an English dub & don’t care about quality, I think it’s on the Ocean Pictures DVD (Brazil), which you can probably buy a copy of from somewhere on the net. 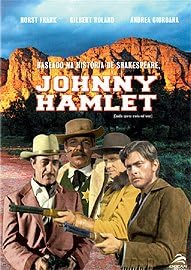 Shakespeare is combined with the spaghetti western in this interesting offering. Though the language is modernized, the plot is basically the same as Hamlet. In this version, the hero does not die--in ...

Be warned that the picture & sound quality in Ocean Pictures DVDs is usually terrible (see thread topic,2682 - The ´how is this dvd?’ thread). I’ve had one of their DVDs before & it was almost unbearable, which is why I didn’t bother & just got the Koch edition of Johnny Hamlet instead.

where? i prefer the english version better, i don’t like gilbert roland spoke italian

email here to inquire about fan dub of Johnny Hamlet