Nevada Joehttp://www.spaghetti-western.net/index.php/Oeste_Nevada_Joe (George Martin), a known fast gunman, rides into town and immediately becomes involved with and against the town’s lawless element. In short order he has a job offer from the pretty saloon proprietor (Katia Loritz) which he turns down, determined to move on. A series of events brings him in contact with the local mining operation run by, yes, another pretty woman (Adriana Ambesi) whom he finds very intriguing to say the least, and his resolve takes a hit. This is a Spanish western so we get some romance, which doesn’t really get out of hand, and some plot development (some might say slow), which I think is an overall pretty solid effort. If you like these early Spanish efforts you might want to give this one a shot.

actor_saloon_employee_Nevada_Joe.jpg739×337 34.6 KB
Giuseppe Addobbati Katia Loritz (Mary Blue) X (saloon handyman) Could this be Juan Manuel Simón? He tends bar, waits on tables and even sweeps up. Whenever I find Simón credited I find this familiar face.

Ramon_Corroto_Otto_Greer_mine_super_Nevada_Joe.jpg739×337 27.5 KB
Ramón Corroto (Otto Greer) who loses his supervisor duties to Joe but remains as bookkeeper and advisor

Have this one to watch.

I watched this one recently

this is what i said in “last western” thread:

Iquino: Nevada Joe (http://www.spaghetti-western.net/index.php/Oeste_Nevada_Joe)
-Spanish/Italian co-production from 64 with George Martin. Martin plays gunslinger called Nevada Joe or Joe Dexter who tries to help small town miners and balances between affection from 2 women. Not really a bad film but there isn’t anything really memorable either. Or maybe the horrible theme song which belongs to the category of infamous cheesy sw songs.

Hehe, forgot i had this on my watch pile. Not bad for an early Euro Western, G.Martin does a decent job as a quick tempered gunslinger who in no time gets involved in the affairs of two beautiful women. The action for the most part was alright, with some shoot outs and a few bar brawls. As mentioned above by Bill, the title song was a sucky one for sure.

IMDb now has her name as Rosa Biadiú.

IMDb now has her name as Rosa Biadiú

They have her as Louise in 07 con el 2 delante (Agente: Jaime Bonet). What do you think. Seems to be the same teeth… 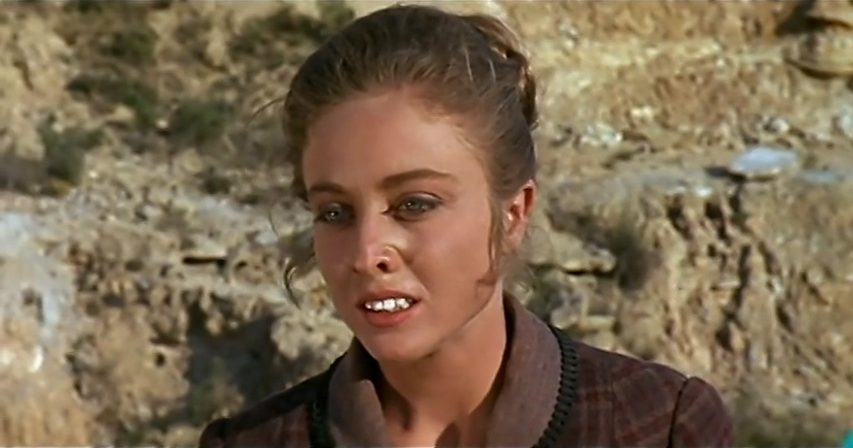 Without a doubt, the same actress.