Couldn’t find a topic for this one, and there is more: surprisingly, to this day the movie, co-produced by Grimaldi’s P.E.A. (Produzioni Europee Associate), is not present in the Italian database created by Al Mangini!

The story, largely based on horse stealing and a covered wagon race, is not very interesting, but the movie partially recovers in the final part when Bill comes face to face with the man who killed his father.

Not recommended to newcomers looking for Leone-inspired films, One Against All might be of interest to scholars of the first Italian Spanish westerns.

A couple of old comments from other threads:

The son of Jesse James sees his dad get killed when young, and years later when working on a ranch he finds the killer…

Early one with Robert Hundar and Roberto Camardiel (nice role), and while offering nothing new most of the time was still pretty much an enjoyable ride.

Nice looking print! I have an old VHS with English audio.

Do you know when the film was released, JC? Something’s wrong here:

Public screening was authorized on 16 April 1965 and about one month later, on May 18, the original VM14 rating was changed to T (all ages admitted).

Thanks! Should be fixed in the Db, which all too often just relied on the imdb for this data

I watched El hijo de Jesse James last night, but in a horrible version that doesn’t come close to the screenshots JonathanCorbett posted above. I also had to make do with the Spanish dubbing, which of course means that I didn’t understand all of the dialogue. Nevertheless, the movie was a pleasant surprise for me, a nice discovery. 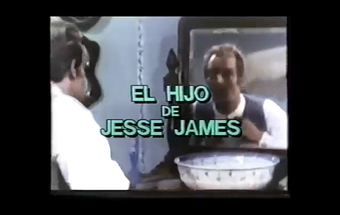 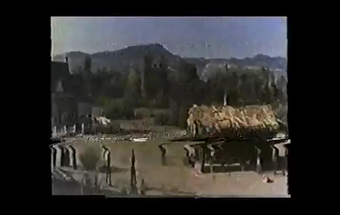 Antonio del Amo’s film starts where more famous adaptations of Jesse James’s life story, or rather his legend, usually end, with the shooting of James by Bob Ford (as, to mention just two of dozens, Henry King’s Jesse James from 1939 and Andrew Dominik’s The Assassination of Jesse James by the Coward Robert Ford, made about seventy years later). Some American Westerns also placed Frank James, Jesse’s brother, at the center of their narrative and made him the direct or indirect executor of revenge for his sibling’s murder (e.g. The Return of Frank James [1940], directed by Fritz Lang, and Sam Fuller’s I Shot Jesse James [1949]). In del Amo’s film, however, Jesse James’s son is the protagonist. As a child, he had to witness the murder of his father; as an adult, he wants to leave the past behind and start a new life. Working as a hired hand under the name of Bill Smith, he ends up in a heated conflict between ranchers and farmers. As his past catches up with him, an oater drama with some Shakespearian undertones unfolds.

El hijo de Jesse James fits well into the general framework of pre-1966 Western films made by Spanish directors, such as Joaquín Luis Romero Marchent and his younger brother Rafael, Ricardo Blasco, José María Elorrieta, Alfonso Balcázar and his younger brother Jaime Jesús, León Klimovsky (Argentine-born), Ignacio F. Iquino, Mateo Cano, José Antonio de la Loma, José Luis Madrid, Antonio Román, Julio Buchs and José Luis Merino. As we all know, everything changed after the release of Leone’s second Western at the end of 1965, and due to that film’s huge commercial success, the “Italian style” was to become dominant from then on. But El hijo de Jesse James, del Amo’s only Western, was released months before Per qualche dollaro in più and accordingly owes everything to its American predecessors from the 1950s and nothing to Leone.

We get to see a number of well-known actors, among them Claudio Undari (the Italian Charlton Heston) in the title role, Raf Baldassarre, Roberto Camardiel, Luis Induni and János Barta. Surprisingly, Adrian Hoven plays a fairly important character, although El hijo de Jesse James was produced without German or Austrian involvement. The female lead, Mercedes Alonso, is a true veteran of European Westerns: As early as 1964 she starred in two Euro-oaters, Roy Rowland’s Gunfighters of Casa Grande and Amando de Ossorio’s La tumba del pistolero (which I haven’t seen). After El hijo de Jesse James she was done with the Western genre, with riding around in the dust, watching unkempt men kill each other, and started working mainly for television

[…] the movie, co-produced by Grimaldi’s P.E.A. (Produzioni Europee Associate), is not present in the Italian database created by Al Mangini!

Couldn’t find it in Kevin Grant’s reliable Any Gun Can Play either.

I have the very rare German 35mm Trailer in my collection.
We played it in cinema some years ago and a friend filmed it with his smartphone

Here`s the result:
https://www.dailymotion.com/video/x5hvbol
Hope to have a “real” scan soon.

Thanks for the link, Grinder! I have actually become quite fond of these early Spanish Westerns over the last few years. A good version of Der Sohn von/des Jesse James would be great, of course.