Hondo and the Apaches is a feature film that was made from two episodes of Hondo, the 1967 TV series starring Ralph Taeger. It was released as a TV movie in the United States but ended up getting a theatrical release in the United Kingdom and Europe. Unfortunately it hasn’t been given a very good DVD release. The version available on a double feature with A Man Called Noon has footage missing. There’s a German DVD on Amazon. Does anyone know whether it has English audio?
Even though it’s nothing spectacular, I think it works as an enjoyable B movie. Anything with Apaches and stake-outs is good enough for me: 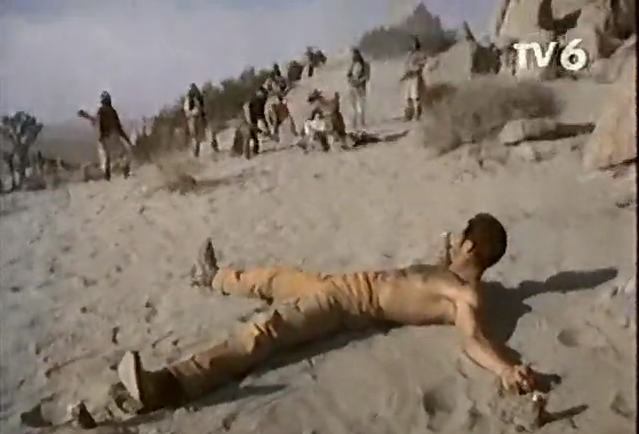 There is a review on Amazon. That guy said there is only a german sound (dolby digital 2.0) and no subtitles.

That’s a shame. It’s a pity the entire TV series hasn’t been given a DVD release.

Let me talk to @upbruckner about that

There’s a German DVD on Amazon

This one: http://www.amazon.de/exec/obidos/ASIN/B00ZRWMAKY/italowestern-21 ?
Seems to be German Audio only. Reviews say the image quality is ok. Another review mentions that it is cut. It is really just the feature film, at 82minutes.