Help identify the movie from the book

I’m learning English and I am currently reading a book by an English writer Mary Hayley Bell “Whistle Down The Wind”.
It tells about the village children who found a stranger in a barn and mistook him for Jesus.
In one of the scenes, the children answer the stranger’s question “What is a convict?”. And one of the children replies:
‘Like the one in that film who booed out at people from behind graves,’ said Poor Baby. ‘I adored him. I cried when he died.’

Here is a small piece of the entire dialog:
…
He smiled at her.

'What’s a convict mean to you, Mary?’

She’s only eight, so she couldn’t have. Silly thing.

'Like stealing the sheriff’s money, and holding up the
Stage-coach,’ said Susan.

‘Like the one in that film who booed out at people from behind graves,’ said Poor Baby. ‘I adored him. I cried when he died.’

'I still don’t know what a convict is,’ said Mary. Really slow she is.

‘A convict is a man who is proved guilty of a crime by the law,’ He told her. ‘Sentenced to punishment. Prison, maybe death.’

‘Last time You were proved guilty,’ said Elizabeth. ‘Sentenced too, and crucified, wasn’t You? And then all those years afterwards they found out they were wrong!’
…

What is this movie that Poor Baby is talking about???

It sounds like the scene from ‘Great Expectations’ (1946) with Finlay Currie as an escaped prisoner hiding in a cemetery.

Welcome aboard! Glad to have you.

Thank you for the hint.
I read “Great Expectations” at school (not in the original), but I did not associate it with this description in any way.
I will definitely watch the film.

Thank you. Me too.

Check this out … visually it makes more sense 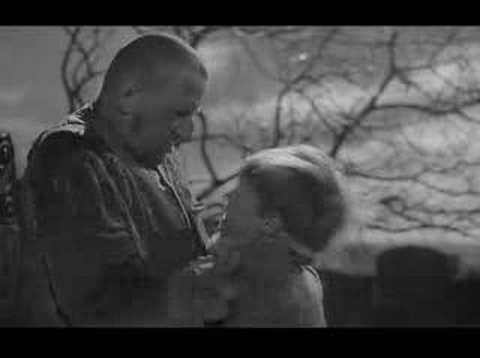 Yes. I have already managed to watch the film (though in translation).
And it is very likely that you are right.

Welcome to the Community Amigo!