I watched this composite a few days ago, but wanted to wait ‘til I’d re-watched Batzella’s previous film Paid in Blood (as it shares some of the same scenes) before putting pen to paper. For instance, those bottom two screenshots on the PIB thread
http://forum.spaghetti-western.net/index.php/topic,1831.0.html

Jeff Cameron (American in both) plays an undercover army officer going back to clean up his old town from a corrupt Mexican gang leader, who’s set up from ill-gotten gains (and from behind the scenes) as a respectable fellah and town boss. (In PIB Jeff is out for revenge on some Ringo fellah, who shot and robbed his brother.)
The town boss’s main gun-power in town is supplied by a cartoony Irish-brogued Donal O’Brien who’s very much from the jabby-fingered school of overacting in this one. (He plays a similar part in PIB, but it’s dubbed completely differently to suit the story, and he’s lost the accent.) The Mexi-baddy fellah with the bad reputation* is played by a smoothly dressed Phil Lynott, :

but a lot of the film takes place over the border whereupon he becomes a mexi-dressed cowardly bully. (There is no Mexican element at all in PIB – and he just plays it straight as an American town boss). His bar-gal girlfriend (Esmeralda Barros) is a Mexican as well in this, (and an American in the former). But no matter her nationality, she gets slapped about quite a bit by Mr. Lizzy in both of the films - and even more so in this.
Krista (another bar-gal and whore) is an old flame of Jeff, and not to be outdone in the slap-stakes gets floored with a right belter off him :o (that screenshot of her looking gorgeous). ‘Slap first - ask later’ Jeff forgives her though as it transpires she was coerced into it by Mr.Mexi-baddy, who had kidnapped (and killed) her father to try and get her to tell him of the whereabouts of a silver mine.

Paid in Blood (itself far from brilliant) is the better directed and cohesive film, but despite the cheapness, the crappy landscapes and it being bodged together, this ain’t too bad, despite Mr. Batzella’s reputation. And it was almost certainly shot back to back with PIB. Some scenes are the same of course - but with different developments for each film, and I don’t think actors were brought back a year later to add stuff in as has been suggested. It was Batzella’s intention to do two films at the same time imo. But it is obviously cobbled together, and those joins are certainly visible and clumsy at times.

Although it’s a spag-by-numbers, if this had been put together with a bit more character development, it could have been the better film of the two. It’s got a reasonable amount going for it… Krista Nell sporting basque and cheroot :-; The Emerald one’s transformation from shark suited big shot 8) to penniless peon; and there’s a gang of masked uniformly-dressed banditos with the campest sombreros this side of Speedqueen on tequila night.
There’s a mexi-massacre as these vagabonds of the western world kick the film off, and the boys are back in town* again, with their sombreros, cummerbunds and flares, to get their comeuppance in another town based shoot-‘em-up later on. In fact there’s plenty of action - lots of people being somersault-shot off high buildings either in town, or in the mexi-village or off cliffs; there’s a jolly catfight twixt the saloon gals. as if they hadn’t been slapped around enough already, (although it’s longer and more bitey in PIB); in fact there’s fists, knives and gunplay all over the place – and none of it is too protracted; And all this nonsense is set off nicely to a suitably trumpety soundtrack.

With another 50 quid or so to spend - a bit more character development, more clichéd cackling close-ups of the sombrero-wearers, more basques, and of course, a bit more time to sensitively edit it and splice it together, this could have risen to a 3 star shooty beauty, instead of being the 2 star mediocre horsey flick that it has turned out to be.
It could have beaten PIB by a star or two if it had achieved its potential – mainly because it’s the Mexican border stuff that I like – and it does have the better story – unfortunately it’s just not very well told!

The version I saw was a Dutch vhs rip with subs, with the word DRAAIPLEZIA popping up at the start of some scenes… scherpy’ll tell me? It was ok quality (I’ve seen worse) and a greeny and reddish casts in places. Are there other versions?

@DRAAIPLEZIA popping up at the start of some scenes… scherpy’ll tell me?

Draai = turn
Plezia = doesn’t mean anything, but is probably a fantasy spelling of ‘plezier’ = fun. Could be the name of a video distribution company, a seller on Ebay or anything.

Actually there seems to be a seller called ‘Draaiplezier’, but something wrong with him, if I’m not mistaken …

Draaiplezier was a Dutch VHS label, a subsidiary label of Video For Pleasure.

Its name, translation: rolling pleasure, is a play on words as this label advertised Samson, a Dutch brand of rolling tobacco.

Highly collectible tape, which I am fortunate enough to own myself. 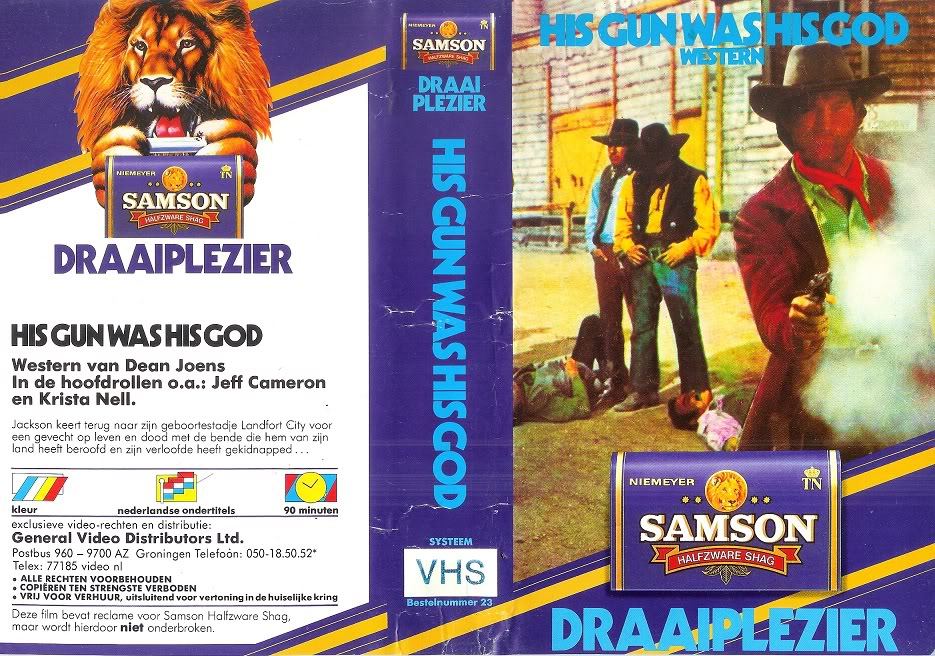 [quote=“Bad Lieutenant, post:3, topic:3373”]Draaiplezier was a Dutch VHS label, a subsidiary label of Video For Pleasure.

Its name is a play on words as this label advertised Samson, a Dutch brand of rolling tobacco.

Highly collectible tape, which I am fortunate enough to own myself.[/quote]

Ahhh - thanks for that. Indeed I did wonder why there was a Samson ad at the end of the film. I don’t have the vid but I still have my old Samson baccy tin that I bought in Holland 36 years ago

And who is (Phil Lynott) the town boss in both films ???

I haven’t noticed archive footage with Salvatore Campochiaro in this one, but maybe I took my eye off the ball for a few seconds…

it would only take a very few

despite the cheapness, the crappy landscapes and it being bodged together, this ain’t too bad, despite Mr. Batzella’s reputation.

Yes, considering the nature of the movie that is true. In my opinion among this kind of productions Corte Marziale is by far the worst.

it was almost certainly shot back to back with PIB

They were. This is true for Clerici, O’Brian, Nell, Barros, Baraghini, Dottesio and of course Jeff Cameron; on the other hand Turini, Mannatrizio, Palladino, Fantini and Papa(s) are new performers.

As you know there are also scenes from Batzella’s first western Anche per Django le carogne hanno un prezzo. 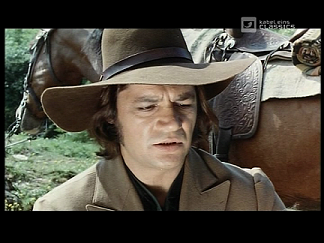 Revisited this via a recent better upgrade. Not one of Batzella’s worst, but this low-budget entry is rather silly and poorly acted, but it has it’s good (few) moments though. Besides, i like Jeff Cameron in these type of Spaghs.

Besides, i like Jeff Cameron in these type of Spaghs.

Same here. On my to watch pile this one.

So are there no DVD’s for this? 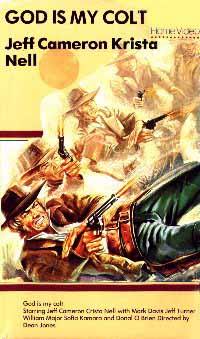 A UK release according to the database page. Never come across this tape before. Anybody have it? I have the Yugoslavian one.

I think this one is great fun. Highly recommended for fans of trashy spaghettis.

I’d love to see it, if I could find the fucker.

I enjoyed this one a lot! A lot of good action and cool stunts from Jeff Cameron.