A nice serious early SW with an interesting cast and a decent plot, not anything extremely sinister or mean-spirited though. The final shootout is a bit longer than it should and consequently drags at some points, but generally the action scenes, without being really over-the-top, are quite well directed. Another good perfomance by Guy Madison and the fan favorite José Manuel Martín has one of the main roles being one of the five revengers. If you don’t expect too much, this will be sufficiently entertaining.

What do you think about it?

I like this one quite a bit. I think Aldo Florio is another sadly underrated Spaghetti Western director. This film and ANDA MUCHACHO SPARA are great little films!
The only time FIVE GIANTS FROM TEXAS drags, in my opinion, is when they are trudging through the desert on their way to wipe out the Gonzales clan. Otherwise, I think the film moves along quite well (and especially in the final gun battle).
I definitely rank this one in my Top 40 of SW’s.

i agree with chris on this film. when i saw this i wasn’t expecting much and found it very entertaining, not a top 20 or alternative 20 but still pretty good.

Comparing this to Anda Muchacho Spare which I watched yesterday, I can safely say that there’s a huge improvement both in direction and in style between these two films from Florio’s part.

I know, I know … I’m generous in my marking at the best of times - BUT - I am still in shock as to how good this golden era spaghetti was. The credits came up at the start and I was thrilled to see squinty Ken and JM Martin were gonna be in this. I’m always pleased to see Guy Madison as well - and I thought he was absolutely brilliant as the moderating influence turned “murderer”. That was nasty, and unexpectantly gritty.
This … I can’t even say much at the mo… I’ll have to post my thoughts later, so gobsmacked am I. I agree with Chris tho, if I HAD to find a fault, the desert bit dragged a bit - but whooooooh - I just loved the protracted shoot-out and the never-ending end!
So - Absolutely 5 outa 5 - this had EVERYTHING I coulda wanted.

Generous - I don’t think so - 5 stars (without cider - as it was in the beginning), and most definately 5 at the end (with help from The 5 Ciders from Tesco) - Top 20 material in my (good) book! I’m still reeling.
I’d like to thank mwan for sending me his copy of this - but Chris, I’d really love ya to say a massive thanks to Franco Cleef for taking the time to splice all these versions together - fantastic. I’ll buy that man a cider oneday ;D.

I think i’ve still got a Greek tape of this somewhere, i can’t remember the film to be honest.

Finished watching this for the first time and I really can’t imagine bringing myself to view it again… the action felt repetitive, the music was very average, and the pace is just too slow imo.

A classic small gem of the genre. It’s not talked about much but it has a good story, good cast and acting. It has it’s slow moments but it comes through with the goods.

And I also think that Anda muchacho spara is muich better.

I found it pretty boring. “Anda muchacho…” is way better than this.

Not viewed a western by this director before, so thought might aswell start with this one. Slow moving to get going, but effective enough for this familar path of revenge. Madison was ok, but has been better. Enjoyed the end gun battle, which I thought was well staged. Viewed the Franco Cleef version whose main source print appears to be a German print which is a little on the dark side at times. Nice the cut footage from the German print has been added from another source, a job well done. Amazed at the amount of footage cut from the German print. Wonder if Franco Cleef will do any more fan projects ?

And I also think that Anda muchacho spara is muich better.[/quote]

I find it interesting that so many people like ANDA MUCHACHO SPARA—which I find merely OK on all fronts.
The music is merely OK. The acting merely OK. The story (which I find to be a little meandering and vague) merely OK.
I think FIVE GIANTS FROM TEXAS holds together much better…though it does have its slow moments.

[quote=“Chris_Casey, post:12, topic:2161”]I find it interesting that so many people like ANDA MUCHACHO SPARA—which I find merely OK on all fronts.
The music is merely OK. The acting merely OK.
[/quote]

Its Bruno Nicolais’ best soundtrack for me (ANDA MUCHACHO SPARA).

The acting I think is very good, they managed to pull off a couple of emotional moments.

The acting I think is very good, they managed to pull off a couple of emotional moments.[/quote]

Like I said, I find it interesting that so many people (likely the larger percentage of all SW fans) like ANDA MUCHACHO SPARA so well.
Makes me wonder what is wrong with my taste in films!

Interesting, you guys make me wanna check out those two westerns. After almost 70 SW watched, I feel the genre still has many surprises left in store for me!

Yep…loads of surprises for you yet.

First time I’ve seen this was a couple of years ago. I’ve found it somewhat boring, mostly due to the “desert” scenes.
Probably it was influenced by Sturges’ The Magnificent Seven but it lacks adventure.

Five gunmen at the dinner table at Christmas. 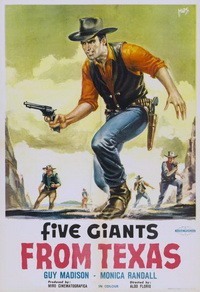 Does anyone know if there’s a wide-screen print of this? I’ve only found a 4:3 and a full screen. Also, what’s the best print available? The ones I found where American VHS prints, no subs. Really liked this film.

Does anyone know if there’s a wide-screen print of this? I’ve only found a 4:3 and a full screen. Also, what’s the best print available? The ones I found where American VHS prints, no subs. Really liked this film.

Wide screen would be great. This is one of my top 20s and it’s due a re-watch soon. I’m presuming the Franco Cleef version is the best? It’s certainly better than an old vid-rip I’ve got somewhere.