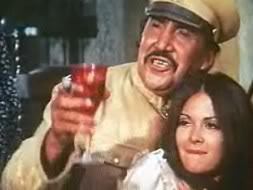 I have been reading everything I can find regarding the life of Mexican filmmaker Emilio Fernandez. Some of us in this group are familiar with him as Gen. Mapache in Sam Peckinpah’s THE WILD BUNCH and as the villain, Lorca, in THE RETURN OF THE MAGNIFICENT SEVEN. And I am sure that many of us here already knew he was a highly respected director in his own right and a bona fide movie star in Mexico.

Although I thought I knew quite a bit about this man’s very interesting life, in reading a few articles I happened across lately I have learned even more! What a life story!
Some of you might already know this stuff; so, just humor me, if so!

The guy, affectionately known as El Indio (because his mother was an Indian), was an actual soldier/officer in the Mexican Revolution under Huerta. Got exiled, in a manner of speaking, to the USA because of that.

As a young man he WAS THE BODY MODEL FOR THE ACADEMY AWARDS’ OSCAR STATUTE!! I think I will call them Indios from now on! ha ha!

He made many classic Mexican films—most of them very romantic melodramas–for which he won many awards. I have only seen a few of his films as a director, but have to confess to having enjoyed every one of them!

He was the second unit director on many American films like THE MAGNIFICENT SEVEN, MAJOR DUNDEE, and THE UNFORGIVEN (the John Huston film, not Eastwood’s).

He also had a very violent streak in his personal life. He shot a film critic (reportedly in the testicles!) because the guy had dissed one of his films! And he also killed a farm worker in the 70’s (claiming it was self-defense).

Here is a link to one article that I found that covers a lot of the above. I thought some of you fine folks here might find this interesting.

As an aside, I also discovered today that “Mapache” is a Mexican-Spanish word for Raccoon!

Always loved Fernandez.
And that certainly is one colourful life.