El Torcal De Antequera is a nature reserve located in Andalusia, Spain, about an hour drive north of Malaga via the A45 road, and just south of the City of Antequera. The reserve is notable for its unique karst rock formations which date back to The Jurassic age when the location was an ocean bed, resulting in limestone formations which still stand today. [1] 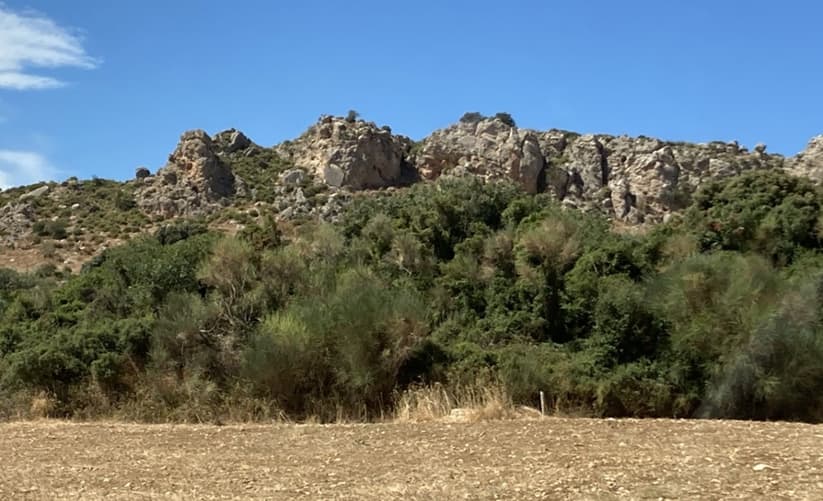 El Torcal from a slight distance

To the spaghetti western fan however, the location is notable for being the primary filming location of roughly the last third of ‘The Deserter’, an Italian/Yugoslavian production directed by American director Burt Kennedy. In the film El Torcal doubles for ‘The Devil’s Backbone’ an in-film location close to the US/Mexican border. The film, like many spaghetti westerns, isn’t overly popular amongst the more casual cinema or even western fans, but is a firm fan favourite of a number of Italian western buffs including, but not limited to, legendary modern director Quentin Tarantino [2]. According to IMDb, there were only ever five films filmed on location there, with The Deserter being the only western. [3] This, to me at least, begs the question; why weren’t any other spaghetti westerns (or spags as I tend to call them) filmed there at all? Is it because they were usually filmed in Tabernas and/or Cabo De Gata in Almeria (like the first two-thirds The Deserter itself), or areas further north which were closer to Madrid, resulting in El Torcal being just a bit too “out of the way” for other production crews? I can’t say I believe that’s the reason myself because there were several spags like ‘The Mercenary’ and ‘Johnny Hamlet’ which were filmed in Almeria, but then had a scene or two filmed in Ciudad Encantada, which is located roughly halfway between Madrid and Valencia. Then there are numerous films like the much more well-known ‘Dollars Trilogy’ which were partly filmed in Almeria but then partly filmed in the aforementioned areas closer to Madrid. That’s not even taking into account the fact that most interior scenes of a ton of spags were filmed in Italy, while exteriors were shot in Spain. The actual number of westerns made like this God only knows, so that to me doesn’t stack up. Is it simply because prior to production of ‘The Deserter’ no other directors or location scouts were aware of the location? I suppose that’s possible, even if I also find that hard to believe given the amount of people there must have been involved in spaghetti western production up until 1970. I don’t know the answer myself and can only speculate to no avail, but maybe another forum user or a member of staff will have an idea as to why-if so please let me know. Whatever the case, the location works well in the film. Looking at some of the photos I took personally you would think it was indeed somewhere close to the Mexican border. 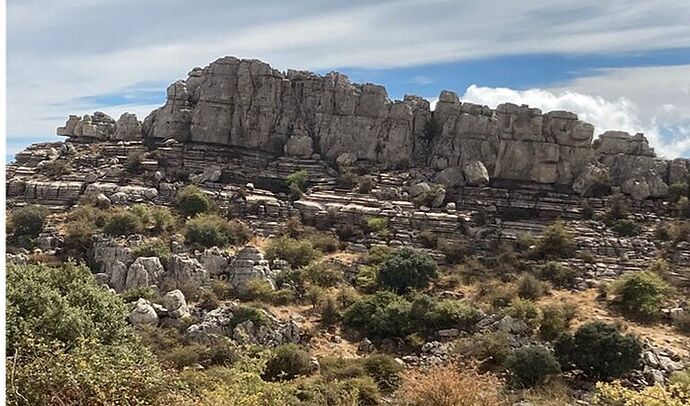 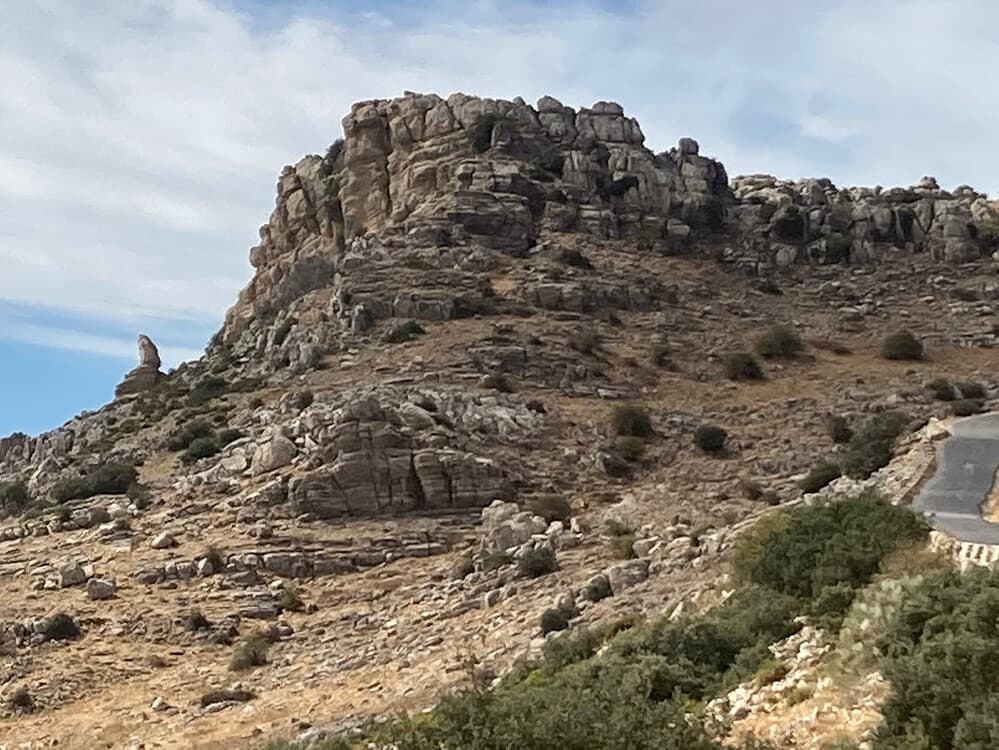 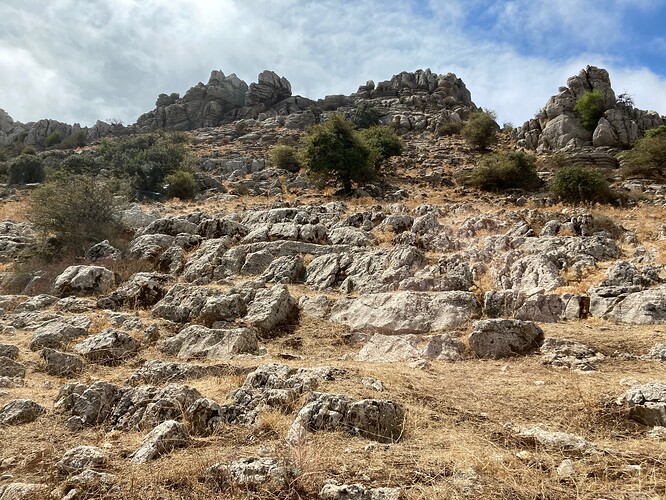 I’ve been a spaghetti western fan since I was fifteen, which given that I’m now twenty eight seems like a fair chunk of my life, but for whatever rhyme or reason I only watched The Deserter for the first time recently at the time of writing. I may have taken an unnecessarily long time to watch it, but I still, like several spag buffs, loved it in spite of a couple of flaws (but hey, I’m not here to review the film itself). I think that due to the film being partly a Yugoslavian production, I incorrectly had it in my head that the unique filming locations of El Torcal were filmed in former Yugoslavia and I said as much on the film’s thread. It wasn’t until @aldo pointed out my mistake that I realised where the location was really situated. The funny thing was just a week and a half after Aldo’s correction we were having a family holiday (seven of us in total) to Benalmadena, Costa Del Sol, which is almost next door to Malaga. Given that I had been to Almeria twice to seek out many spag filming locations and I was now going an hour away from this location, it just seemed like fate; I had to now go to El Torcal as well.

There are at least two ways you can get there from Malaga or eastern Costa Del Sol if you’re not a Spanish resident: you could get a taxi, which would cost you just shy of eighty euros for just one direction at the time of writing, or you could do what we did and just hire a car for the day and drive yourself. The downside of the latter is if, like me, you’re from somewhere like The UK where you drive on the left, it can seem scary having to do everything the other way around. That said the hotel we stayed at had a direct car hire service and, if I remember correctly, it only cost fifty-eight euros for a day, so from a financial perspective it was a no-brainer. You could also apparently get an excursion, but when we went to a travel office in Torremolinos, we were told that there was another office just up the road that would likely be able to sort one for us only to be told otherwise upon getting there. You could likely get an excursion from a travel office in Malaga itself though, and almost certainly one from Antequera. Even if on the off-chance you couldn’t get one from the latter, a taxi would be relatively cheap.

Once off the A45 road, it was a bit of a struggle getting to the location due to relatively thin roads with a big, intimidating fall on the right hand side at some points. I’m not going to lie it was a bit scary but the views were lovely, so it all balanced out I guess. Google Maps didn’t help much either because it gave us a longer way of driving there than necessary (quelle surprise), the route of which it didn’t send us on when returning for some reason. It was far easier and quicker on the way back and if you were to drive yourself there using Google, with the app giving you the second route it gave us the first-time around, it should be relatively straight forward. According to Google the reserve is over twelve hundred metres high [3], and you’ll be able to guess as much (or something close at least) at some point once off the A45 when you realise you’re not actually that far away from the clouds. Once we were just a stone’s throw from the car park of the reserve, we drove through a cloud which was the first time I had ever done that personally. It may have been southern Spain in September, but it was freezing upon leaving the car. I’m from The Wirral which is a peninsula, and the temperature was like a windy day in January here. I can’t recommend two layers covered in a thick coat or fleece enough.

But hey, it was all worth it. El Torcal itself is a unique and fascinating place to visit, whether you’re a fan of The Deserter or not. I can’t say I’ve been all over the world, but I’ve been to a fair few places in Western Europe including Ireland, and a fair few places in USA, and I’d never seen anything quite like it. At the top of the car park is a visitors centre with a gift shop and a café. I can’t comment as to what the tea or coffee was/is like because I had orange juice, but it was nice to have a sit-down before taking a look around, and it was a heck of a lot warmer inside. 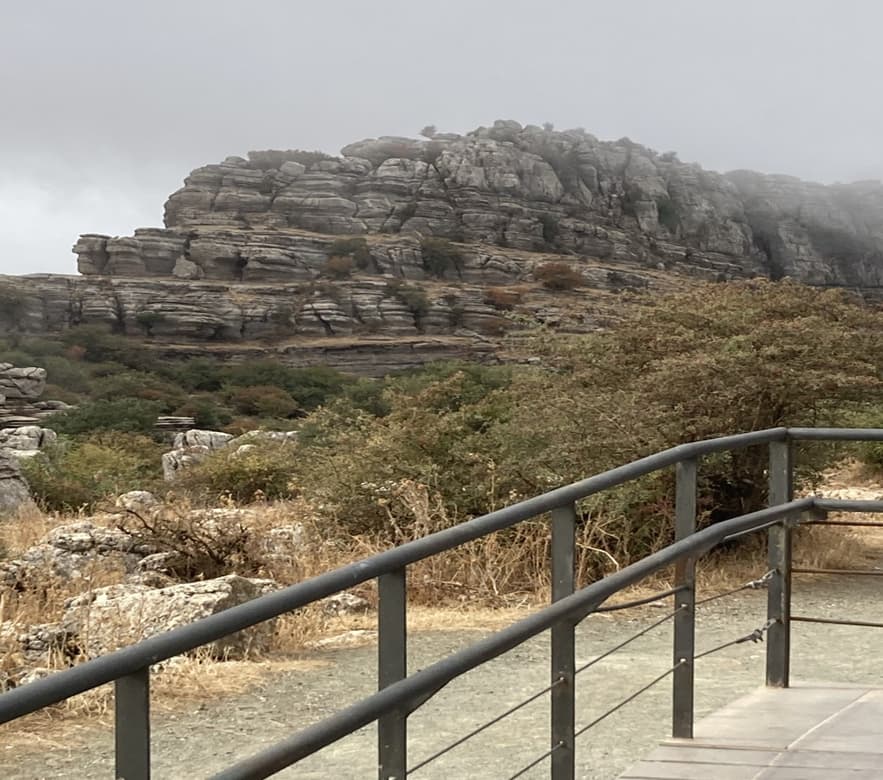 A rock formation just outside the visitors centre 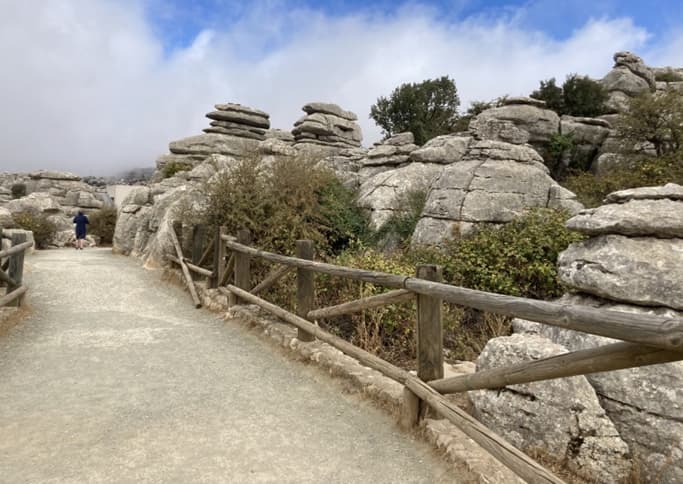 A photo taken close to the visitors centre

There are three trails you can walk along, at roughly 1.5km, 2.5 km and 4.5km in length, which start close to the visitors centre and the car park. Just a short walk away from the centre is a ledge with a view of the Spanish countryside as well. 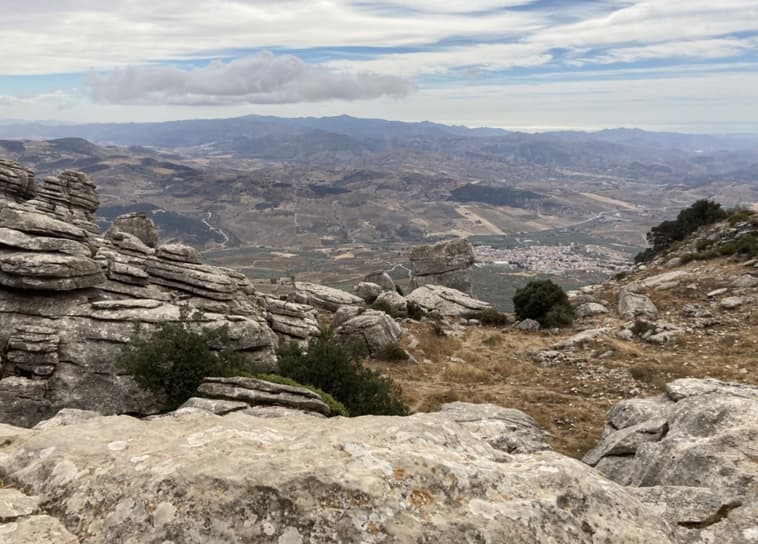 Cracking view from above 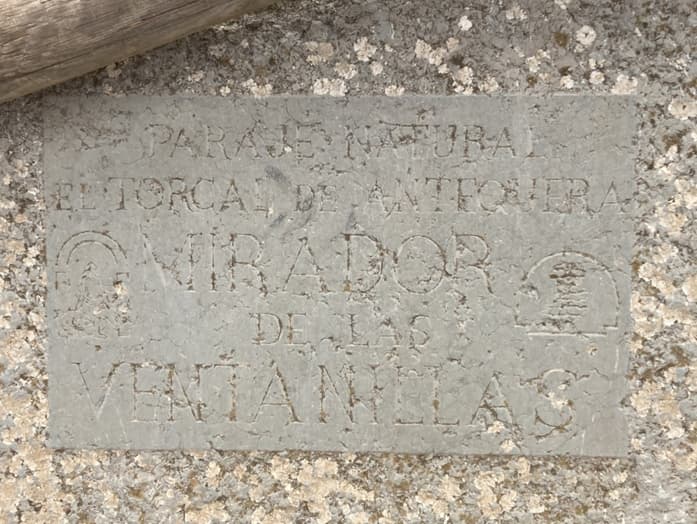 A plaque situated on the ledge

Sadly, due to it being a family trip with plans we had made with members who didn’t come with us on this particular escapade, I only had time to walk the two shorter ones. (I’m a bit gutted myself but fear not because we’ve said that in all likelihood that we’ll be having the same do in Benalmadena again around the same time next year, and I’ll be sure to go back, walk the other trail and, of course, take plenty more photos). The trails that I walked along were very rocky with plenty of grass. It was a bit like hiking in North Wales or The Lake District so I’d say hiking boots would be ideal, but I was honestly fine as I was in just a pair of Vans because the ground was solid. I’m not adamant it would be like that in the winter though; I could see hiking boots being a must at that time of year. I kept walking as far as I could with my phone in hand constantly taking pictures, and what a joy it was. While I can’t describe the other trail based off of experience, I would imagine it’s the same deal just in another direction. Hopefully I’ll be able to rectify that issue next year.

According to wiki, you may even be able to see some rare wildlife, like the peregrine falcon or the Bonelli’s eagle. [1] I sadly didn’t see a thing; I’d have loved to get a photo of an ibex. Again, I’ll keep my fingers crossed for next year. 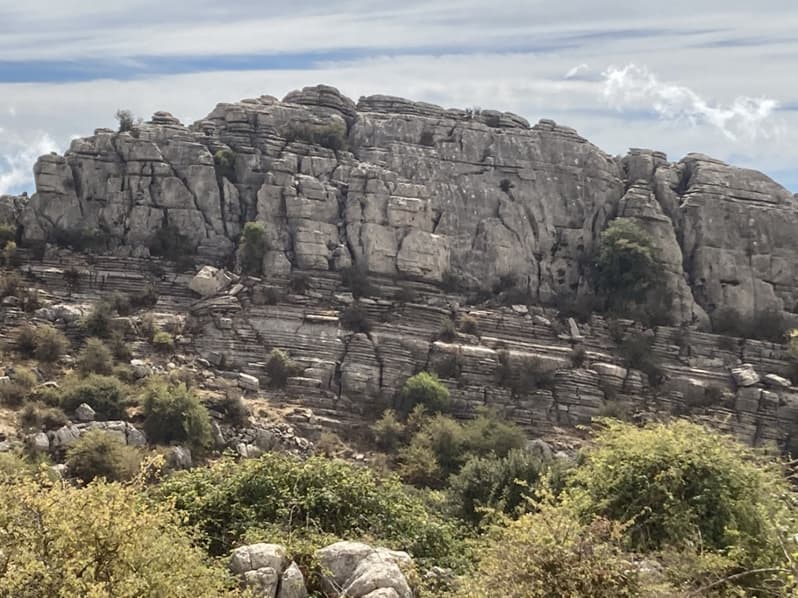 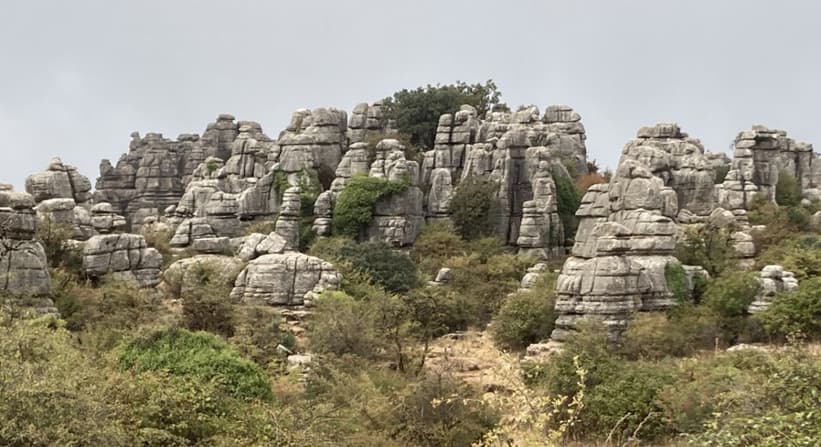 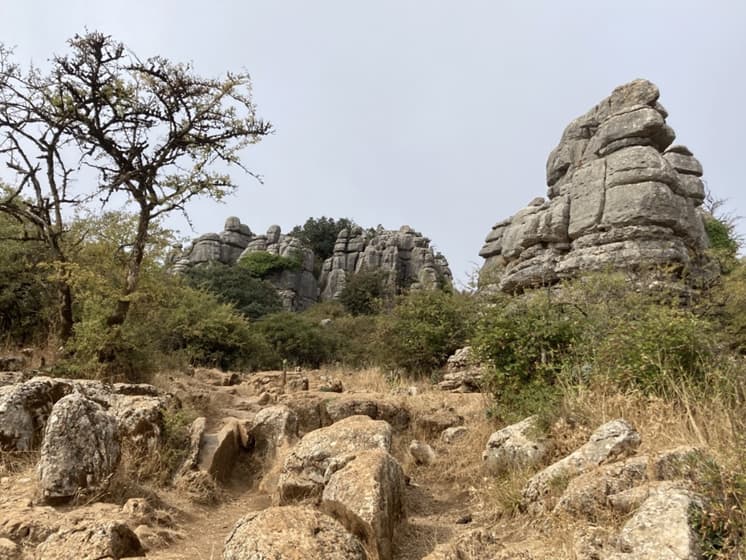 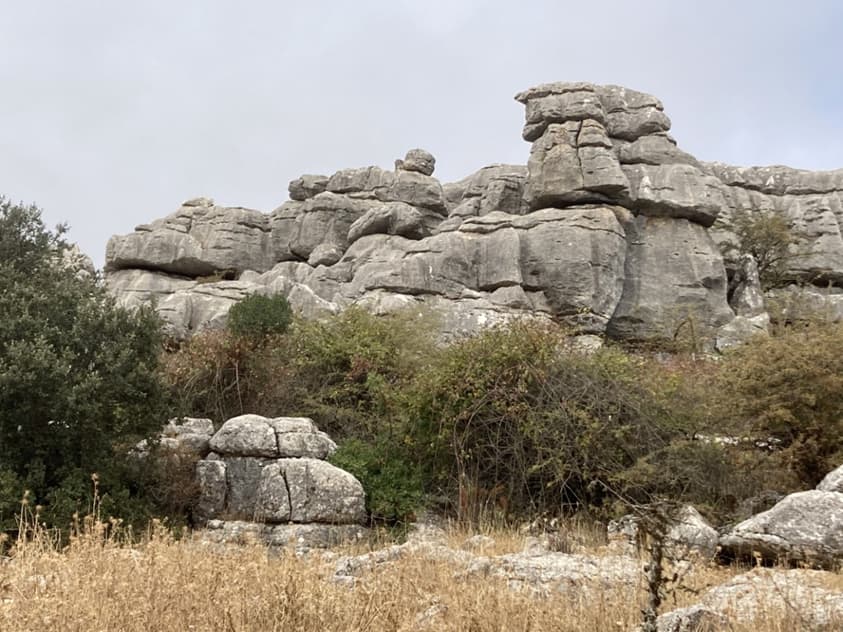 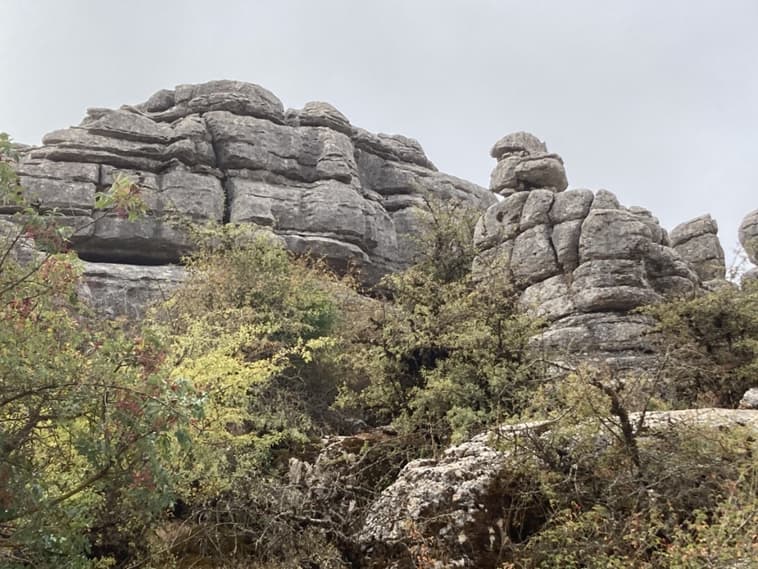 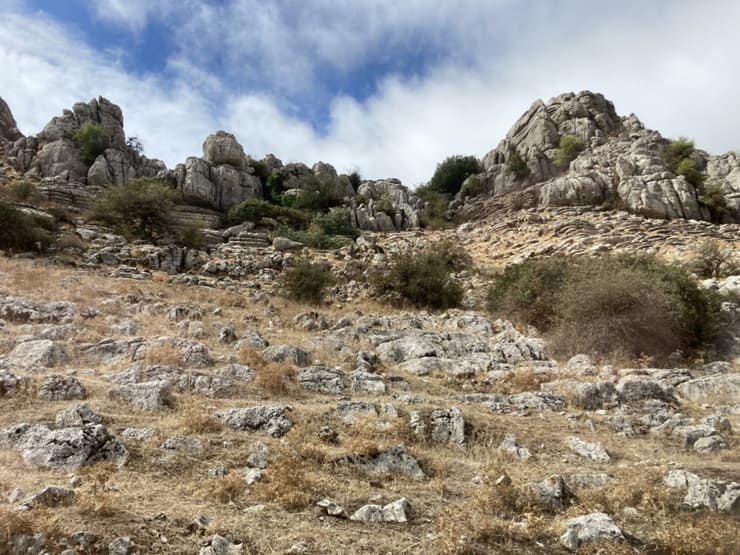 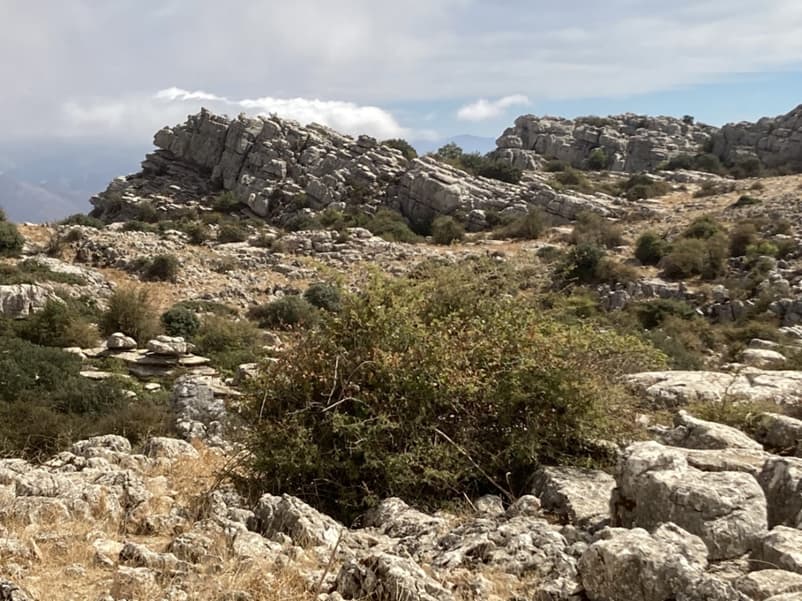 More photos from my walks

If you’re ever within an hour and a half radius, I highly recommend a trip to El Torcal if you can decide on a way of getting there or can find an excursion of some kind. It’s the most unique part of Europe I’ve ever been to and it makes for a great day out. Apart from your method of getting there and any potential drinks or souvenirs you might buy in the visitors centre, it wouldn’t cost a penny either. I’d say this to anybody who has an interest in Spain outside of just the typical tourist destinations. If you’re a spaghetti western fan with an interest in visiting filming locations like me however, this is somewhere you need to put on your destination list. Just be sure to take plenty of warm clothing…don’t be fooled because you’re in Southern Spain. A couple of flasks with plenty of warm drink probably wouldn’t be a bad idea either.

I haven’t been there myself … but it does look spectacular. Thanks again for sharing your pics and info.

My only guess that this location wasn’t used more, is, that it’s probably too far off the beaten track for many productions to be arsed making the extra effort … compared with the Tabernas area, where you’re only a short drive from Almeria city to all the really iconic locales … and as only the medium budget SWs and above could afford to go on location at all, perhaps it was thought too much of an added expense?

Great stuff. Thanks mate and one to add to possible future trips list.

and as only the medium budget SWs and above could afford to go on location at all, perhaps it was thought too much of an added expense?

Could be. It wouldn’t have cost a fortune but thinking about how many films come close to budget or even go over it wouldn’t surprise me if a lot of other films couldn’t afford to make the journey when they could just film in Almeria instead.