Marco Ferreri was something like a maverick director of the author cinema of the 60s and 70s. So it’s no wonder that his take on the western is not really a western.

Don’t Touch the White Woman was shot in western costumes in the middle of Paris mostly in modern surroundings, which anachronistic potential adds to the alienation effects of the film. Ferreri also used a giant building site for several of the “outdoor” scenes, and the authentic destroying of buildings was also made part of the story and the message of the film.

There may be much stuff in the film to think about, but I wasn’t interested to try too much. Too much message and not enough enjoyable style. And the great cast is a bit wasted in giving us only coarse caricatures.
And what a cast this is:
Catherine Deneuve, Marcello Mastroianni, Michel Piccoli, Philippe Noiret, Ugo Tognazzi, Alain Cuny, Serge Reggiani, Paolo Vilaggio

Bizarre film for me and yes plenty to think about. Violent moments towards the end of the film as I recall.

Yeah, some bloody moments, even a head is cut off (two to be correct), and look what happened to Catherine Deneuve.

In the end it was the racist “don’t touch the white woman” verdict which led to Custer’s death. In twice a way.

I’m curious about that movie. It’ll be on German tv soon, then I’ll have a chance to watch it…

I think this film should be included in section “The Spaghetti Western Films” because in Alex Cox’s new book he says its a Spahetti Western.

Yeah, but it obviously isn’t. Some may say it’s not even a western.

It’s a “western” - note the quote marks - in the same way that Godard’s Vent d’Est is a “western” (though from memory Ferreri’s film is considerably more entertaining than Godard’s - not difficult, I know).

But it is about General Custer.

You must have a broad definition of genre to call it a western. What amazes me more than Alex Cox having included this in his book is the fact that it’s also in his top20. I mean this film is so boring! Only the last 15 minutes were something worth watching. Otherwise it’s just guys talking and talking. And the idea of locating a western in the middle of the modern time Paris is’nt a joke which would hold for 2 hours.

You must have a broad definition of genre to call it a western. What amazes me more than Alex Cox having included this in his book is the fact that it’s also in his top20.

That probably has something to do with Cox’s political views. I haven’t seen this film yet but I have heard that it’s very, very leftist… and so is Cox.

I am leaning towards Bill’s view on the film at the moment.

Good joke, bad joke? If you think Matalo! was weird, you ain’t seen nothing yet! 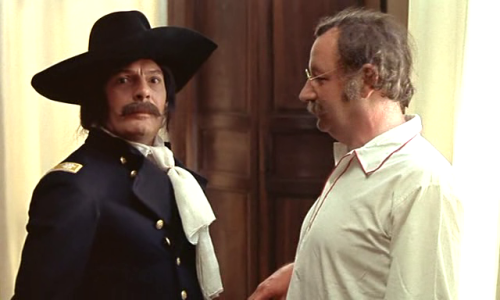 Thank you scherpschutter once again for your invaluable assistance.

I sort of liked this piece of eccentricity, but only because I had got acquainted with Ferreri’s other films and known what to expect. Not a spaghetti western, mostly a political satire.

I haven’t seen it since the mid 80s, when it was shown at a festival of genre curiosities in Brussels, they also showed El Topo and a couple of movies that are now forgotten, don’t even remember any titles.

I kinda liked it then, thought it was a great idea, but I remember it went on too long.

Yes, it is a little too long. Ferreri is a quite unique director - even though his style is extremely weird, he succeeds in making entertaining films. I wonder if you have seen his Dillinger is Dead - it is truly astounding how Ferreri crafts the material. Not only is the movie well-made, but also entertaining in its own absurd way, despite having almost no script (!).

I have seen Dillinger is Dead of course, but a long time ago, and I didn’t really know what to think of it then.
Would have to watch it again to say anything constructive about it.

I’ve seen six movies by Ferreri so far and Dillinger is Dead is by far my favourite one - it is absolutely my kind of flick. If you should re-watch it, you can read this wonderful essay - it’s extremely insightful and elucidatory:

More than a decade after his death in 1997, the moment is right for the rediscovery of the work of Marco Ferreri. “I think he’s modern. More than modern, in fact,” frequent collaborator Marcello Mastroianni once remarked, encapsulating how far . . .

Watching this one again, and I do find it pretty funny and entertaining. Do people honestly think it’s a western?