“Django Strikes Again” – what is the best DVD?

Hi all! This is my first time posting, though I’ve long been a fan of the spaghetti western database! (I “rescued” the Peter Tevis "Quintana song that the SWDB Facebook page shared a long while back.) Anyway, I finally watched the original Django in Italian, with English subs, and appreciated it a hell of a lot more. I own the Anchor Bay double release of Django and Django Strikes Back, but since I upgraded the first movie, I wanted to upgrade the sequel, as well. I’m in the minority, but I rather enjoy the sequel and think it is an important part of what will become the Franco-Django trilogy.

I’d like to find the full cut of the film, running at 96 minutes with the beginning dubbed in English, but I’d like to also get the correct 1.85:1 aspect ratio. There are several Region 0 DVD releases on ebay, but it is a mess. Some of the info there matched with pictures doesn’t correspond to the SWDB, either. I was wondering if anyone had experience as to which version would meet my hopes, if any!

I quite like the film too, so you’re not entirely alone

I believe the Anchor Bay disc is the best of the releases, perhaps surprisingly. At least, all of the German discs are non-anamorphic, as far as I know, and none of them are English-friendly either.

Thanks for the response! I’ve decided to save my money for now. There are other SWs that I want to try out before I take a chance with upgrading Django Strikes Back. My hope is that when Django Lives is released, we may see it surface again so the trilogy can be complete.

I have only watched this one on VHS: 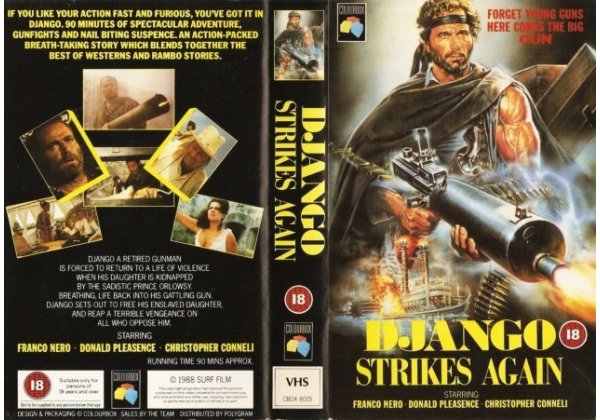