Die for a Dollar in Tucson / Per un dollaro a Tucson si muore (Cesare Canevari, 1965)

Does anybody knows if their is an english version of Per un dollaro a Tucson si muor (Blutige Rache in Tucson)?

Hard to believe, but this amateurish early italian western from 1964 was really made by Cesare Canevari, the director of Matalo!.
Some weird scenes in this one too, but amongst the overall clumsiness they may only be caused by accident. If Matalo! was a western possibly made under drug influence Per un dollaro a Tucson si muore looks like the film of a druggie on withdrawal shot in the woods behind your home (actually it was a tidy looking Yugolavia).

One of the worst and boring SWs I’ve seen.
Acting, story, dialogues, atmosphere, everything is sub standard. To be seen to be believed.

Apparently there exists no english language version. The horrible dubbed german one was prepared in 1998 for the “lower classes TV”.

I remember you mentioning this one in your analysis of my Matalo! review (which I’m planning to expand on). So I looked it up in thedatabaseand it looked very cheap and lifeless. And now your claims don’t make me any more anctious to see it.

I couldn’t add anything !

P.S.: One of the baddies has Spongebob’s voice :

P.S.: One of the baddies has Spongebob’s voice :

I like the way Canevari has included some pictures of western-themed paintings to both beginning and the end of the movie just to pass time. Surely this is a sorry excuse for a movie but at least everyone gets a small art gallery for the same price. ;D

Two versions out there a German and Italian one!

Watched this one yesterday (German Pay TV) for the second time. But it wasn’t geting better. In my opinion this is really one of the worst SW ever. Even most of the Fidanis are quiet better than this one. At first the plot is very poor, bad acting, silly costume (you just have to take a look at Joco Turk), no action - anything else? I would say zero points for this one… 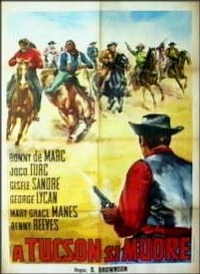 Technically a very bad film, with corny plot and overall cheapness. The second half is passable with a hilarious catfight and mass shootings. Before that it’s merely bad in a boring way. 4/10

I watched the Kabel Eins Classics version, which looked nice.

According to the Archives of Italian Cinema, Per un dollaro a Tucson si muore was directed by P. V. Oscar De Fina.