Does anyone know if Warner Archive’s release is cut? It’s been a long time since I watched this film, so I decided to order it.

100 minutes is the correct theatrical runtime verified at the time in 1968, but there were cuts before the movie was submitted to the ratings board (see trivia section on IMDb).

Still havent seen this. Would love for some company to do a thorough restoration in 4K for an uncut BluRay. One can only dream

I’ve yet to see it as well, but the presence of a suitably violent, nasty role for Peter Cartsen has peaked my interest again.

I first saw this film when I was four or five years old on TV, so I was too young to remember the differences. The only scenes that stuck in my head were the Simbas attacking the train and the leader holding the diamonds. I always tried to find it on VHS but never came across it. Looking at the DVD, I realise I shouldn’t have been watching it at that age.

It’s still rather violent even if it is cut. Great film though. Highly recommended for action fans.

Dark of The Sun - FuriousCinema.com

The visceral cinematic explosion begins as soon as the blistering, psychedelic opening credits roll in this 60s classic. Director Jack Cardiff was previously a... 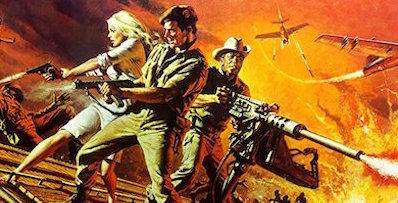 Jack Cardiff's Men on a Mission classic DARK OF THE SUN - FuriousCinema.com

One of the overlooked action-adventure classics of the 1960s, DARK OF THE SUN will finally be getting a long overdue release on hi-definition BluRay...

One of my favourites. I’d love to see an uncut release.

what’s cut about this? just noticed a moment without dialogue, but it might’ve been on purpose

There’s also the pre-release version, which I’d love to see:

“Original cut of the movie was so violent that many scenes were cut out even before movie was submitted to the ratings board which still demanded additional cuts on some of the graphic scenes. Scenes which were cut because of the violence and other reasons include; Curry forcing Claire to have sex with him, Simbas raping nuns and throwing them to crocodiles, Simbas raping women during the village massacre and gang raping Liutenant Surrier, Simbas dragging a guy tied to the motorcycle and then pouring gasoline on him and setting him on fire, longer death scene of Ruffo in which he tries to grab Henlein after he stabs him but Henlein stabs him again killing him, longer fight between Curry and Henlein and longer death scene of Henlein in which Curry kills him in very graphic and bloody way. Some action scenes were also cut, some deaths too. Because of the many cuts made on the movie some scenes suffer from bad editing, most notably parts of the village massacre and death scenes of Ruffo and Henlein.” (https://www.imdb.com/title/tt0062863/trivia?ref_=tt_trv_trv)

Wow, yes some of the things described do appear cut… I wonder if that will ever see the light of day though. It’s still a great movie, but it’s already so wild and outrageous, a few cuts don’t change that much, so why not deliver more