What movie do you feel you might be alone in either loving or hating. Pick a side & let the debate start. Let’s not just throw movies out there list style, we’ll pick one movie & let the discussion end of it’s own volition. This thread is for specific reasons for & against. Since Sherp picked a radical view of not liking The Shining, we’ll start there. 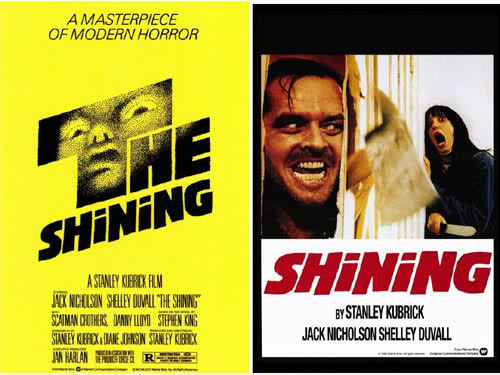 Has anyone read the book of the Shining ?..is there more killings in the book ?

The Shining is one of my favorites. A very rare 10 out of 10 for me. Has pretty much everything I desire in a horror film. Haven’t seen the made for TV version yet though.

Great film, 10/10 for me as well, although its not rare from me as I am pretty lenient on ratings…

While I’m sure that Sherp will chime in with his specific reasons why he does not like this film, I will state my opinion.

The very premise of isolation for any long period of time to me is scary, factor in the fact that they are snowed in, the road is unusable & the last undertaker went crazy & murdered his family, this feeling is compounded. The child, Danny has telekinetic powers & some freaky visions. Any time the innocence of children is breached by horrific visions (& creepy twins) you really feel for his character. All the lead actors do a great job showing the effects of cabin fever, especially Jack ‘Torrance’ Nicholson. Danny has to fight off visions as well as watching his Father slowly turn into a maniac. Nowhere to run as the Overlook Hotel is shut off from the outside world (with the exception of a 2 way radio). Images of the murdered twins, balls rolling from nowhere & hallucinations of imaginary bartenders have no explanation as they are alone in the Hotel. This is a very psychological movie. Kubrick does a great job building this isolated feeling of tension. The maze scenes are other examples of claustraphobia. It’s like when I watch Das Boot, it makes me feel like I’m gasping for air as I watch those guys in the sub. Kubrick also leaves some things to the viewers imagination. What is Jack haunted by? Was he there in the past? WTF is that guy doing to that rabbit?! What is more believable to you? A man going stir crazy or a psycho with a mask killing young couples who are having sex? Many scary scenes, the redrum scene, the bathtub scene & the classic ‘here’s Johnny’ axe scene are classic & frightening. The dialogue is great & the soundtrack ties it all together. Even without the scares, that are not your normal frights, it is a beautiful movie to watch. The mountain scenery & the beautiful Overlook make this an esthetically pleasing view. I often view this movie while snowed in to get the full effect. Sherp, at best it deserves another viewing.

I think maybe that is the case for me too.
I saw this one when it first came out in the cinema and struggled to stay awake. Went away thinking it was ok but was generally underwhelmed. Haven’t seen it since so I should give it another go.

Well, as you might understand I don’t have it in my collection, but I gues the library or one of the video rental shops will have a copy

Going to watch it asap

Book: I read it, it’s a decent Stephen King novel, but not one of his best. I found it a bit more rewarding than the film, but not great (Misery, The Body, The Mist are much better novels/novellas)

It has this feeling of claustrophobia and there’s a bit more horror in it; one of those nice King ideas is bringing those ‘hedge animals’ to life.

I read it after watching the movie, mainly to find out what Jack was haunted by; when I saw the movie I hardly had a clue what was going on: where they ghosts from the past? hallicunations? was Jack a reincarnation of the killer?

Nicholson is to over the top for me. The kid annoys me. The scenes where Nicholson is having a drink at the bar become a bit tiresome. I prefer this type of film with more killings in. Most of all the film does not frighten me. I remember viewing this for the first time and could not understand what all the fuss was about. After viewing the film twice since I am still of the same opinion.

I think the problem with Nicholson in this movie is that there happens to be this certain scene with the axe. It is one of those scenes, that is too famous, too popular to be taken serious any more. There have been so many copies or funny versions of it, that when it actually appears in the movie it leaves you with a strange feeling. All the versions made this scene become pathetic.

I personally like the music in this film. Like in other great Kubricks the score is well chosen and marvellous.

in my opinon Kubrick’s " The Shining" is over rated and Nicholson is way over the top, he looks nutty right from the beginning and despite having it’s moments, i much prefer the novel and the t.v movie miniseries redo. i’d give kubricks shining 6/10.

Nicholson is way over the top, he looks nutty right from the beginning

I believe that was the same reason why King himself didn’t like the movie.

Personally I think The Shining is an ok horror movie but I will join the crowd that can’t really see what all the fuzz is about. I would actually have to say the same about the novel. Regarded as one of King’s finest and most horrific (in a good way) books, but I just don’t see it. His other novel from roughly the same period, Salem’s Lot, dealing with another classic theme (vampires instead of a haunted house) is way better and simply has more going on.

Seems I…I…idiot was wrong when he said it would be difficult for me to find anyboy here on the forum who had the same negative feelings about the film. I spoke about it yesterday with a few colleagues, most of them interested in cinema, and it turned out the film wasn’t very popular among them. Like I…I…Idiot I thought I belonged to a small minority. It’s hard to be original these days.

Strange he made it into a movie.

This could reveal what he had in mind for the movie. The truth is I don’t get that. My idea is that he was attracted by this snowbound house, that might have reminded him of Thomas Mann’s sanatorium in Der Zauberberg (also a book about madness and isolation). But it’s hard to detect any philosophical or social layers in King’s book (or Kubrick’s adaptation).

Strange he made it into a movie.

That’s not strange. Why using an already good book? Better to use a book in which are interesting ideas, which weren’t used well.
For me it was always strange to make a film out of a fascinating book.

Don’t know the book btw (and that Kubrick doesn’t thought much of it does not mean that it can’t be a great novel for others), but I think Kubrick’s film is a good starting point to develop complicated ideas (philosophical or whatever) out of a film. If someone likes to do so.

First impressions:
It was a bit better than I remembered, the first 45 minutes work very well, then it goes a bit downhill (along with Jack, who really hams it up here). Some scenes - Jack talking to Loyd, the scene in bathroom etc. - are quite funny, but they don’t really add to a scary atmosphere. The redrum scene is great (still shaking), but I found the finale, in the labyrinth, largely ineffective. Didn’t like some of the editing and camera work.

Well, I seem to surprisingly be in the minority. I love the moniker ‘over the top’. To me it’s too easily thrown around. Watch youtube & you’'l see a lot of real life people acting crazier than him (OK maybe not axing folks but…). I disagree that he is over the top from the beginning. I’ve obviously watched it several times & don’t see that. Bob from House By the Cemetery was annoying, Danny (playing Danny) I thought did a great job. ‘Danny’s not here Mrs. Torrence’. That is a chilling scene. I love killings as much as the next one but son’t rate how scary a movie is by the body count. That stupid shark movie Open Water was a shitty flick but the premise of being lost at sea in shark infested waters is horrifying.

I read it after watching the movie, mainly to find out what Jack was haunted by; when I saw the movie I hardly had a clue what was going on: where they ghosts from the past? hallicunations? was Jack a reincarnation of the killer?

I love this aspect of the movie. Again, for me everything doesn’t have to be explained to me for me to enjoy the movie. The ambiguity means the viewer has to piece things together themselves & you’ll get different opinions on what is real & what is imaginary. Obviously Jack’s visions are hallucinations but what Danny is seeing is not.

Dillinger, you are right about how commercialization or satire can ruin the original intensity of a scene but that scene for me is still intense.

I’m not sure how an 8 year old being chased by his Father with an axe is not scary. Maybe scary is not even the correct word.

I re-watched Shining also last night. And I have mixed feelings about it.
For the beginning: Nicholson is really hamming it up in most of the scenes. He has only a few really good moments amongst all his grimace making. I think Gene Hackman or Robert Duvall would have done wonders in this role.

Btw I watched of course the short European cut, which is probably the director’s cut.