Tough British-American western, filmed in Spain
No real spaghetti feel, despite the locations. In fact, with a chase at the heart of the story, The Wild Bunch seems to have served more as a model. Somehow First Blood also came to my mind (I checked it already: that was not a Michael Winner movie).

A half-breed Indian (Chuck) kills a sheriff in self-defense, but is chased afterwards by a lynch-hungry mob
The mob is led by a former Confederate officer (Palance), who knows something about indians, and slowly becomes aware of the fact that the people he’s travelling with are worse than the person they’re after. After the Indian’s wife is brutally raped and one of the rapists killed, the group members fall out, giving the Indian the chance to play them off against each other.

Some violence XL (rapist Waite ends up with roasted genitals), good atmosphere, occasionally sunspenseful, but not completely satisfying. Michael Winner is one of the most despised British directors, so it seems, and probably therefore turned to American genre movies like westerns and vigilante movies at a certain point in his career. I don’t think he was that bad as a director, but he wasn’t great either. Here his direction is uninspired, merely adequate, leaving it all to the actors. They’re first rate, of course, but cannot overcome the stereotyped characterizations.
To my surprise, Jerry Fielding’s score sounded a bit uninspired too.

still, worth a look.

Alot of different versions to this one…

Alot of different versions to this one… 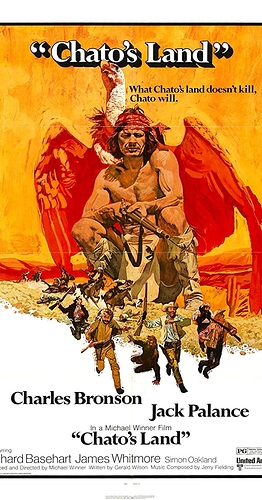 Ah, ok, only the usual censoring.

Winner wasn’t a bad nor a brillant director, here he worked quite effective.

I watched this DVD
I bought it yesterday (along with Man of the West, The Big Country and The Long Riders), it was on offer in a supermarket for 4,99 €

It runs 96 mins
According to Jim White (DVDTimes) it’s uncut, except for some horse-tripping
I had the idea some minor cuts were made, probably where originally the reels had to be changed
The XL violence scenes are uncut (naked woman, burning man)

Image quality is okay (a bit grainy, but no real problems), the Mono sound loud and clear

Been a long time favourite of mine since the age of 14.
Bronson with minimal dialogue is excellent, but what a physical presence the man has.
Palance a man living in the past is interesting to watch, and miles away from some of the Spaghetti characters he was playing around this time.
The music by Fielding is one I do not mind, but my favourite Fielding/Winner score is to Scorpio.

A film some people underate, but this was from the time when I think Winner was making some not bad films, including the excellent Lawman.

I picked up a used copy of this last night. I’ve seen it before and like it but not as much as others in this thread.
On a purely personal level, I like this film pretty much just for Chuck & Jack.
To me it has the feel of a made for TV movie (albeit a good one). I think that may just be because it has a full cast of American actors who appeared often on American TV in the 1970’s (Simon Oakland, Ralph Waite, Victor French, James Whitmore, etc). And, as I think Scherps said, it has the Spaghetti locations without the feel.

According to Jim White (DVDTimes) it’s uncut, except for some horse-tripping

I may be wrong but i thought the horse tripping was only cut in the U.K.

I may be wrong but i thought the horse tripping was only cut in the U.K.

That’s true, but for the Dutch release, MGM apparently used the very same copy
For a company like MGM the Dutch language family is way too small for a seperate release. That is: they just add Dutch subtitles to the print they own (for those Dutch who care), and that is their ‘Duch release’.

Holland & Belgium aren’t very important to companies: too small, too many people speak either English (Holland) or French (Belgium)
Therefore we usually get the print originally aimed at the British or French market, with only Dutch subs added to it
That wouldn’t be too much of a problem, but for this reason we are often robbed of a English DTS-track (we get a French DTS-track instead)

I used to have a Bronson laserdisc set with Chato’s land, White Buffalo and Breakheart pass but i sold it.

Haven’t got a Chato dvd yet but i will now make sure i get a U.S. release, thank’s for the info scherpschutter.

Haven’t got a Chato dvd yet but i will now make sure i get a U.S. release, thank’s for the info scherpschutter.

German / French disc is the best one to get in my opinion:

Between the R2 German and French -releases, since they include the “Unrated”-version. R1 has the “R-rated”-version, and UK -release is cut by the BBFC.

The BBFC represent to me yet another element of the ‘nanny’ society here in the U.K.

Well, it must be impossible then to release The Charge of the Light Brigade in UK.

Well, it must be impossible then to release The Charge of the Light Brigade in UK.

i’ve never seen it but according to the imdb there are several versions.

I will have to check this one out as I have it on demand.