I am compiling a list of films where there is a character with a handicap. This would include an existing handicap or one brought on by an injury or occurrence. Some of the more well known ones of course are in the Corbucci films Minnesota Clay, Django and The Great Silence. Juan Wild in For a Few Dollars More. Epilepsy in Django the Bastard, A Minute to pray, A Second to Die, Death Sentence and Last of the Badmen. Bandidos, Django, Seven Guns from Texas and Left Handed Johnny West for injured hands. Of course Black Jack after the assault on him at the saloon after his old gang catches up with him and the handicap afterwards. Corbucci used the mute in both Minnesota Clay and The Great Silence. Vengeance, A Man Called Blade, Shoot Joe, Shoot Again and Minnesota Clay, Blindman for vision issues.

Unholy 4 had an amnesiac character that may have escaped from a mental ward. Good, Bad, and the Ugly has “half soldier” as well as eyepatched Bill Carson who Tuco assumes the identity of, wearing his eyepatch.
Dirty Outlaws had a blind father being scammed into believing his son returned. Fernando Sancho wears a eye patch in The Boldest Job in the West.

That Mexican guy in Gli Specialisti had one arm.

There’s so many more. Mr Morton in Once upon a time in west of course. Ettore Manni is a cripple in Fidani’s Stranger, Say Your Prayers! Jose Calvo’s blind man in Day of Anger. Gilbert Roland has a metal hand in Between God, the Devil and a Winchester

The dwarf on stilts in My Name is Nobody?

Corbucci’s blindness in one eye apparently lay behind his affinity for such characters. His characters were then the models which others copied.

Might be of interest to you: “Infirmes et handicapés dans les westerns.”

El Tunco Maclovio, although not strictly a spaghetti, it pretty much is 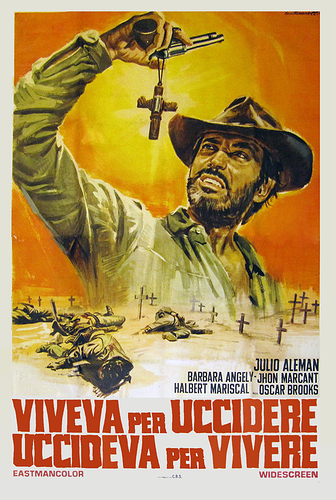 My PLL marathon reminded me that Aldo Sambrell’s character in Hands Up Dead Man…You’re Under Arrest has a crippled hand after PLL shoots it at the beginning of the film.

Half Soldier in THE GOOD, THE BAD AND THE UGLY. There’s also the soldier at the train depot that Tuco tells the Army gave him nothing for his arm and of course the Al Mulock soldier who lost an arm thanks Tuco in the opening scene.