Didn’t find a thread of this one so I made a new one. Just finished it, watched it through a butchered fullscreen print. Sadly, it’s not among the good lesser known ones. Giancarlo Romitelli isn’t much of a great storyteller I’m afraid. The story feels disjointed at several points, maybe the print I watched was cut, but it’s not something that would make much difference in a film of this quality. The two flashbacks were very clumsily inserted too, it took me a minute or two to realize that those scenes were referring to a past time. I’d also prefer it if the movie had a more serious tone, it’s not totally lighthearted nor silly, but certainly less serious than I wanted to. The finale seems to go on forever and the twists/doublecrossings are very typical for this type of western, nothing comes really out of the blue. The action was very basic and unexciting, the acting was OK. Bacalov’s score had some good trumpet parts and some other not-so-good ones. The short review on the main site is a little bit more positive, so perhaps there are some people who may enjoy it more than I did.

Very average affair for me.

Distinctive and somewhat discordant, the opening music is suitably twangy, whistly and boingy – all wonderfully spaghettiesque – so all bodes well… so far…

A card game, with a few extra aces involved, violently introduces us to the untrustworthy partnership of our main protagonists – a phoney Mexican called Chapagua and ex yankee cavalryman Doc Harrison (George Ardisson).
Having acquired $100,000 in bars of confederate gold, which will be explained later in a flashback (but not found “at an old confederate fortress” as it says in the database synopsis), and with the civil war still in operation, our boys need to stash the loot.
This is the bit I like – they take it in turns to be blindfolded and lead each other down a canyon, full of blind turns and caves, to bury the gold – each one knowing only half of the journey and the rock formations that they’ve memorised.
After all this hokeyness, and later, with the war barely over, they meet up again to try to reclaim their bounty.

Joy of joy – Mr. Billy Black (my favourite bit-part spag-support, Ricky Boido) spur-jingley struts his way into town, black-clad and homo-erotically spoiling for trouble, and wanting to prove his alpha-maleness to his boys, he picks a fight with our 7th. Cavalryman. Now we know (but hope otherwise) where this is gonna go. I’ll say no more.

Hereabouts we meet our third protagonist, the beautifully femme-fatally, and somewhat world-wisey, Moira (Linda Veras). Besides treating Georgie-boy to a bath-time duet (albeit through a hotel wall), and with only us (as yet) to goggle her soapy legs, we realise that she is also a devious sort and has ambitions to buy up the town and possibly have a go on our hero (via another favourite minor player Piero Lulli - as the Yankee Major - whom she’s also stringing along).

I am compelled to say here, that Veras is by far and away the best actor amongst all these shenanigans and stereotypes. When she is later threatened in a potential rape scenario, she bluffs it out with acting that blows everything else away (no small feat as she’s competing against a fire-breathing mexi-bandit - I kid you not :o), in what is otherwise a traditionally what-we-would-expect-and-of-its-time-macho-stylee-spag.

Anyway – after a traditional spag-beating, and then being nursed back to health by Moira and a bottle of ether, Georgie-boy spills the beans and…
now it’s a full-on treasure hunt - to see who can pull both bits of the puzzle together first.
So… who will it be… Georgie-boy; the fake Mexican; the Major; Moira; or even the confederate or yankee army maybe? Or any combination of those mentioned?

Before we can find out, we are subjected to a wonderful bit of spag-mexi-trumpet-guitary stylee music - that I kid you not goes on for a full un-wonderful 6 minutes with not much happening, except mucho horse riding… but eventually, thankfully, we are led to the conclusion…

There’s been quite a lot of nastiness and double dealing. Everybody has proved themselves to be a cold-bloodied killer within this, and they all have their own greediness and lust for gold at heart…

So… what will it be?
A buddy movie twixt Georgie and Chapagua, or will all this untrustworthyness lead to more dodgy allegiances, or will spaghetti nihilism out.
I aint gonna spoil it for ya though.

So… the Rev’s review’s final conclusion is… it ain’t great; it’s confused; it’s hokey and poorly developed and doesn’t live up to it’s potential…
but – it has Linda Veras (and Boido) – and not only is she good to look at, :-* (as is he :P), she steals the show, Both of them, and the fake mexican, inject some subtle humour - which could be seen as a bit misguided in places - and hints at the film not quite knowing where to place itself. But, although it doesn’t quite know what to be, it certaintly isn’t overall a comedy (thankfully).

It’s a bit unthoughtout in parts, a bit lightweight - but it’s certainly worth a look. I’d like to see it again in a better format. Mine was a vid-rip. Is there a lovely version out there?

Half marks - rounded up for Veras and Boido - 3 stars.

It’s a bit unthoughtout in parts

Hopefully there’s nothing unthoughout about the mighty Rev’s return: welcome back to the fold!

Anyway, back on topic … and as mentioned, there’s a prolongued boring horseyridery-bit towards the back end, so may I suggest…

Anyway, back on topic … and as mentioned, there’s a prolongued boring horseyridery-bit towards the back end, so may I suggest…

Thanks for that: an European mainlandy hybrid The European polecat (Mustela putorius) — also known as the black or forest polecat, or fitch (as well as some other names) — is a species of mustelid native to western Eurasia and North Africa. It is of a generally dark brown colour, with a pale underbelly and a dark mask across the face. Occasionally, colour mutations, including albinos and erythrists, occur. Compared to minks and other weasels — also fellow members of the genus Mustela — the polecat has a shorter, more compact body; a mo It is...

Watched this last night. The Reverend review pretty much says it all. The only thing though, is that i wish there was a better copy out there, i kinda like it a bit.

I finally got around to watching this. I thought it was fairly enjoyable. Interesting camera work at the beginning of the film. Some scenes did drag a bit too much, especially the scene with the Mexicans and their families on the move. I remember watching those scenes in His Name Was King (which is a much more enjoyable spaghetti for me) and thinking they dragged on a bit too much. It’s a pity there is no widescreen version as I would definitely watch this one again. The South African DVD is obviously transferred from a VHS and there’s some footage missing.

Found this on YouTube. The picture quality is bad but it’s widescreen. Not sure what the source is but maybe the blurriness has something to do with the upload itself. Anybody know if there’s a clearer widescreen print out there?

Actually that’s not bad, it looks a lot better than my full screen copy. Too bad it’s not in english, i would have grab it right out of youtube with ClipGrab Downloader.

It’s pretty blurry. I imagine the original file looks better. I wonder what the source is.

I got good looking fan dubbed version of this so after some 15 years or so it was a time for re-watch. I remembered liking the film but sadly the film wasn’t that good, but it’s not total waste of time either. Bacalov’s theme music is good while a quite a lot of music is recycled from other films. Main actors are rather bland but fortunately there’s Linda Veras and Piero Lulli as a support. 5/10

Watched it for the first time last spagvember. Same rating as yours: 5/10 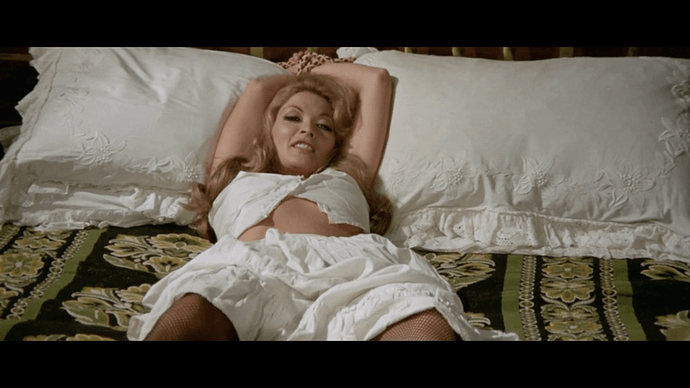 And here’s the review, for those of you who hadn’t noticed the anNouncement on the Main Page

Watched it for the first time as well, in full Corona virus mode.

I followed your example and watched L’oro dei bravados last night (my sixth consecutive night at home due to the COVID-19 crisis; I really don’t know how long I’ll be able to stand this). The film’s title seems to be a conjunctive derivation of L’oro di Mackenna (Mackenna’s Gold, J. Lee Thompson, 1969) and Bravados (The Bravados, Henry King, 1958), both starring Gregory Peck. Watching it was a rather bumpy ride, since I had found only two very bad versions of the movie, one in Spanish, the other in French.