I am thinking the SWDb could contain a database of all these little interview featurettes and small documentaries etc found on DVDs and BluRays. Since most of a title, we could do that, and also include the info of where it was included on and who was in it.

What do you all think?

that would also mean adding these titles explicitly in the specs of those discs and linking them back and forth, plus making the specs more descriptive, sometimes it just says “interviews” or “interview with x”, while it should be “Title of the featurette - interview with x (xmins)” or something, right?

Yes, and what language, subtitles it is in etc

Precisely. I shall get on it, and encourage everyone to chip in. This also shows that we’re not yet good enough at including things learned from these interviews into the database, such as Santi telling the story of how he got booted from directing Duck You Sucker. Of course, some of the stories of these old timers should be taken with some caution

Perhaps we should agree on a split of work?
I’m happy to cover all the UK releases if you want to start on the German stuff?

I got my plate full at the moment, today I’m just gonna finish this in regards to the Grand Duel Arrow disc and then just do it whenever I have a disc in the player for other reasons (e.g. a review), but you can of course start out with UK releases.
I am hoping others will chime in and add to this really interesting project

but it leads us to a lot of gaps in the People category. The SWDb should have more info on people: producers, writers, etc… and this could be a segway into adding some of that, because we need and should link these featurettes (add them to a category if we have them, but more often than not some people should get their own little pages and can be linked henceforth)

Hey guys! Was checking out my DVD of RMR and a few others in anticipation of the new Blu-Rays coming out, and ended up watching the docs on them. So hope these are helpful in some way. The Milian hat check is just a way of me trying to keep track of his interviews lol.

Western Italian Style
Included on: Run Man Run Blue Underground DVD
Year: 1968 (Based on the films?)
Time 38 mins
Language: English (Frank Wolff commentary!)
Short interviews and BTS footage:
Enzo G. Castellari and One Dollar Too Many
Chuck Connors and Kill Them All and Come Back Alone
Sergio Corbucci + Jean Louis Trintignant and The Great Silence
Sergio Sollima edits Run Man Run
Sergio Leone makes his own railway for OUATITW
An impromptu performance by John and Wayne. (That goes on way too long)
Notes: Source of the hilarious quote from Corbucci “That’s why I hate westerns” [after this… what films will you do?] “A western naturally!”

An impromptu performance by John and Wayne. (That goes on way too long)

Yes it does … and they’re corny to say the least - but we do get to see a few SW actors on a night out, Federico Boido aka Rick Boyd and Walter Barnes, who appears to be Master of Ceremonies at ‘The Bunkhouse’ … he looks drunk and scary!

wow that is so helpful, thank you!

We can also lean on a few external sources like this one for example: https://www.freakorama.org

Yes it does … and they’re corny to say the least - but we do get to see a few SW actors on a night out, Federico Boido aka Rick Boyd and Walter Barnes, who appears to be Master of Ceremonies at ‘The Bunkhouse’ … he looks drunk and scary!

I managed to recognise Boido from watching A Skyful of Stars a few days before, but didn’t realise that was Barnes… and yes he looked very intimidating lol.

wow that is so helpful, thank you!

Np! I also noticed Western Italian Style is on the The Great Silence Eureaka BR, so it looks like that Doc gets around.

Friends and Revolution
Included on : Tepepa Koch DVD (Dir: Federico Caddeo)
Year : 2012
Time 30 mins
Language : Petroni (Italian w/ Ger Sub) Milian (English w/ Ger Sub)
Interview with : Giulio Petroni & Tomas Milian [Audio only, Milian hat Check DENIED ]
Notes: Milian says he was shown a list of actors for the Colonel’s part and chose Welles from the list thinking he would bring some ‘class’ to the film. Says they were both difficult actors to work with, but he (Milian) was more difficult.

Maybe Petroni has neat things to say, but I can’t speak Ita/Ger, is this in English anywhere?

ak Ita/Ger, is this in English anywhere?

do you speak French, because it’s also on the French BluRay

Thank you so much. I am in process of including these in the database. I think we oughta hook you up with a database account very soon, amigo

do you speak French, because it’s also on the French BluRay

Maybe I could rip the subtitle file and run it through DeepL.

Missed this out before but Patrick Morin directed this.

And here’s another for today!
Opera of Violence + Wages of Sin + Something to do with Death
Included on : Once Upon a Time in the West Paramount Films DVD (Dir: Lancelot Narayan)
Year : 2003
Time: 29 mins + 20 mins + 18 mins
Language : English Audio for all but Colli (Multiple Subtitle tracks for everyone)
Interviews with : Tonino Delli Colli (DofP), Gabriele Ferzetti (Morton), Bernardo Bertolucci (Cowriter) & Claudia Cardinale. Archive Interviews with Sergio Leone (1984) & Henry Fonda (1975)
Opinions from: Frayling/Cox/Carpenter/Milius.
*Notes: This is basically one big set of interviews split into 3 docs.
Ferzetti got the part by chance when the previous actor had to pull out. Bertolucci convinced Leone to do a story with a woman as a focus. Cardinale refutes being asked to do any underwear introduction shot, but Bertolucci does mention that Leone came up with it as an idea.

Just an aside, but it’s kinda sad noticing how many have passed away since some these interviews/features were filmed… Then of course you realise a lot of these DVDs are knocking on, being nearly 20 years old themselves now.
Next up I’ll probably run through The Great Silence BR features, then I’m out of things to watch! That is until Milian hat watch recommences with the 2 January BR releases.

I was surprised by the disparity of extras between the upcoming releases of Gundown and RMR. Not even a Sollima or Milian archive interview at all on Eureaka’s release.
Would have loved to have watched or read anything from Chel Alonso and Linda Veras about their time. Then you have guys live Donal O’Brien and Pazzafini who have been in so many spaghettis, but it’s pretty hard to find much from them since they passed away 20+ years ago.

There must be so many rare interviews tucked away on out of print DVD releases. Take this Milian one on youtube: 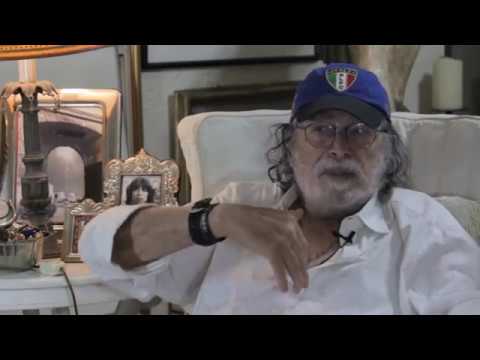 It cuts off as soon as he was about to talk about Gundown… has this been sliced out to be put on a release as an extra?