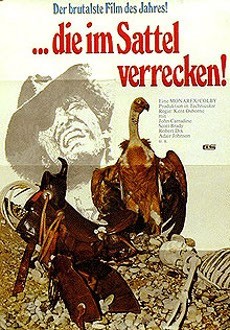 Wow, an exploitation gem! Did not expect that.

Anybody else seen it?

Watching the Dutch tape. CNR Video, which is full screen. Have had it quite some time, but never gave it a shot. Glad I changed that.

Soldier from the north, a super old guy, gets his hand sawn off, because there’s a moneybox attached to his arm. Several other northern soldiers get shot point blank. Lots of blood!

Dude and his little son are forced to watch his black wife being raped by a one eyed confederate soldier. A total retard then beats this woman to death, because the guy called him a little bastard. The black woman is played by a white actress.

A guy gets shot in the face while having sex with a whore. The preacher/head collector is agitated that now the head is ruined. Judging from the bloody pulp special effects it’s pretty damn ruined alright!

The whore I just spoke about washes her nice tits in a river later on.

There’s also a bad guy who is constantly picking his nose and then smearing the snot onto things. Ferdinando Merighi must have seen this, as he featured a disgusting nose picker gunman in They Called Him Trinity a year later.

I had never heard of this before but BL’s writing made me think I might like it. Like he said, a true exploitation gem. It’s a nasty, violent and entertaining. John Carradine’s bounty hunter priest was a great character. Soundtrack of the film is really weird though, theme song sounds like De Angelis Brother’s song from a Hill & Spencer comedy.

John Carradine’s often in these cheapo westerns, and he’s always way above the rest of the cast (or the production)

Glad you enjoyed it, Bill

The number of idiotic characters appearing in this movie is way more than I can take in a supposedly serious western. The film fails either when it tries to be funny or dramatic, you would hardly call Osborne a capable director. The violent killings are the only saving grace. A dishonorable mention to the horrible score, the tune in the beginning must be one of the worst I’ve ever heard in a western.