The fistfight is okay, and with this fateful blow in mind, it’s even exciting. Like I said, some of these blows look dangerously close
It’s simply not a good film. It’s nicely shot and there are a few good scenes, but overall it’s more Sauerkraut than Spaghetti, more Karl May than Leone, and some of these German movies were better; I also think Lex Barker (Shatterhand) was the better actor, especially for these type of heroes. Barker played Tarzan too, if I’m not mistaken.

Don’t mind traditional B western style films so had no problems with this one despite it being hokey in the extreme in places. Some of the dialogue is laugh out loud bad but what the heck. It’s pure Saturday matinee stuff and, taken as that, it’s perfectly adequate.

I tend to agree with Scherp’s summary however in that it is similar in style to the German Winnetou films but not actually as good. Beautifully shot for the most part though and not short of action. Pretty much non stop for the first 25 minutes.

Yes, but don’t worry sartana1968, you’ll still be asleep after half an hour. ;D
Gets quite talky after that.

So you’re idea is that the works for this movie started in March '64 ?

Thanks. I had read these info before, but forgotten about it.

By the way: I had already changed the text a little. I keep this quote from Costa. I like this confusion, it adds to the fun. The film isn’t that special, but some of the stories are quite nice.

Well never much of a fan from this previous Dollars Django euro westerns, and never Knew those Winnetou films existed until I found these site, and this film could be more near a Winnetou film than a spag.
But no very classic american western calvary and Indians stuff, the problems with copies is that they tend to be worst than the original, and well yes not a great “western spaghetti” no bounty hunter, no revenge plot no federales only a man on a mission by the president himself, how many good Samaritans were in real pure blooded western spaghetti, not many.
So a waste of time, actually not all bad, good production values (it seems they still had money back in 1963 or 1964 for this stuff), and the photography work is pretty good (didn’t watch a widescreen copy). The problem is the story a bit boring, and that is what makes the difference in these films. Reading Scherp’s review,I can understand Costa frustration towards Leone, the was doing films for years and then this young guy comes out of nowhere takes an idea from a Japanese film only French critics had seen and makes a real good SW, something he never did.

So why did I’ve seen this one, with still so many good and relevant spags to see, well because of Catherine Ribeiro, she’s a French folk singer very relevant in the sixties and seventies (often compared with Nico cause of her voice), I have a few records from her, solo and with the Alpes (the band she played with in late sixties), she’s of course from Portuguese origin (Ribeiro a regular name here, means small creek), her parents immigrated to France after WWII, in a time that immigration to France was not yet very common. Her folk music was very avant-guard for the time, a mix of folk with and prog with old rural music.
She made only a few films, one with Godard “Les Carabinieri”, so I was surprise t see her here, maybe cause of her looks, she could be a lookalike native american or Squaw.
Her music is far much better than her acting, so stick with her records

A re-watch. Enjoyed watching it more this second time around. It’s a fairly decent early western with a familiar story, good amount of action sequences and it’s well filmed IMO. It also helps that (Gordon Scott) was up for the task and energetic as ‘Buffalo Bill’, which it shows in the final climax in a good knife fight with an Injun. Better than some of the Winnetou films IMO.

Is anyone recording it on movies4men right now? I’m only able to tape it on VHS since my DVD recorder is broken. It’s a shame since the widescreen print is excellent.

Just gave this a watch and really enjoyed it. The dubbing is a bit corny with the Indians but the action makes up for it. There’s plenty of battles, gunfights and punch ups in this! I was a bit reluctant to watch it since I thought it would be very similar to Seven Hours of Gunfire. It turned out to be much better. If you like 1950s-style cavalry and Indian films, you should enjoy this. It’s a pity it doesn’t have a decent release. Hopefully it gets a Blu-ray.

Just gave this a watch and really enjoyed it.

I really liked it too, in fact much better than Mario Costa’s second Western, La belva. As mentioned in this thread, Buffalo Bill, l’eroe del Far West is a naïve, lovingly made movie, reminiscent of the Winnetou films and steeped in visual quotations from its American precedents. Among its cast and crew are some (at least for Spaghetti Western connoisseurs) familiar names, including film composer Carlo Rustichelli, actors Mirko Ellis, Andrea Scotti, Piero Lulli and Mario Brega, director of photography Massimo Dallamano, assistant director Gianfranco Baldanello, and screenwriter Ernesto Gastaldi (according to Kevin Grant [p. 66], Buffalo Bill was the first feature-length Western written by Gastaldi). 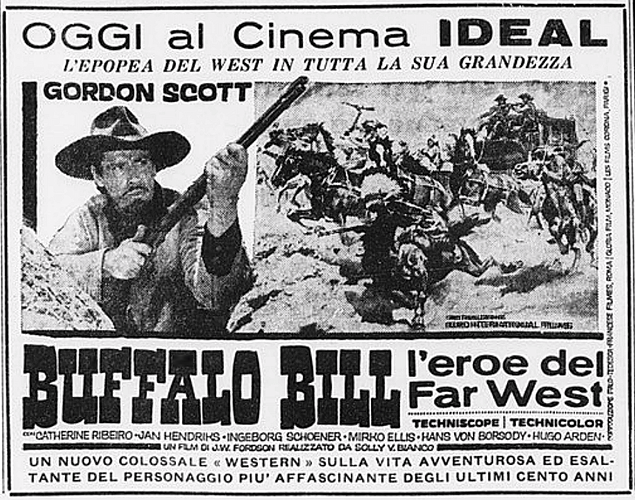