Made a catalog for this distributor:
http://www.spaghetti-western.net/index.php/El_Paso_Pictures

Liking the cover designs, but not expecting much from these releases.

Does anybody have their Dead Aim DVD? Curious if it’s better than the American DVD I have.

Yep like to know re Dead Aim quality aswell as always enjoyed that one.

However, when I look at the sleeve scan 4:3 is clearly stated. The fact that the text of the US dvd is almost copied verbatim, is not too promising either. 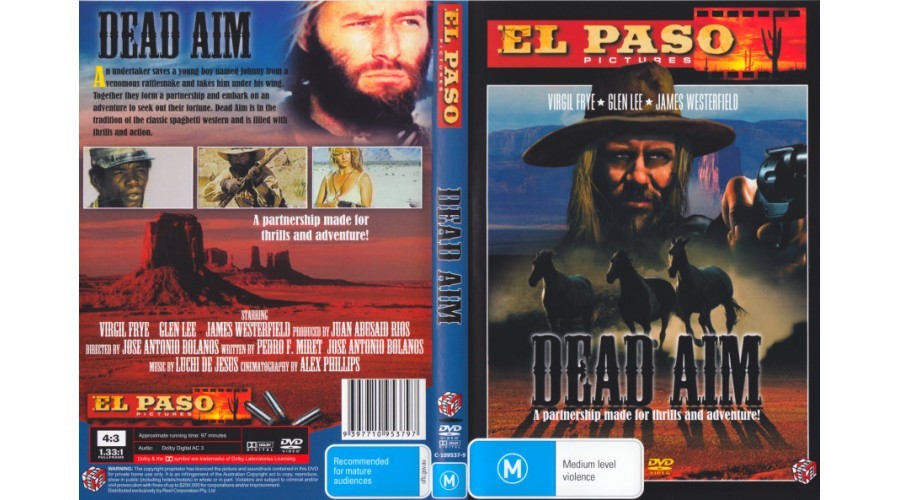 But damn, I’d love to see this in good quality widescreen. I think that the German VHS is the best option, but perhaps I should take the gamble on this DVD.

Keep us updated if you buy the dvd

Yeah, underrated stuff, but chances are slim this is it. Likely this is sourced from the American disc. Runtime seems odd too.

Tried to rewatch the American disc this morning, but gave up. Really shitty pan & scan detracted from the viewing pleasure too much.

Happen to have any screenshots from the German VHS?

Maybe its true, I got The Deserter from them, its a VHS transfer, but it says 4:3 at devoteddvd… will probably get Dead Aim just to see.

One Eyed Jacks and From Noon Till Three have nice looking prints as well, btw.

I’m not sure, know of any discrepancies?

Edit: Looked them up, seems there’s a few missing. Got this link, seems They Call Me Trinity is missing:

Also, looks like we need to integrate El Paso Pictures’ releases into the dvd list for several of their titles.

[quote=“chuck connors brother, post:9, topic:3262”]Maybe its true, I got The Deserter from them, its a VHS transfer, but it says 4:3 at devoteddvd… will probably get Dead Aim just to see.

One Eyed Jacks and From Noon Till Three have nice looking prints as well, btw.[/quote]

Is their version of The Deserter cut? I have collected three different releases of The Deserter. I have the uncut VHS tape released by Paramount, a low quality DVD released by East West Entertainment LLC (on a double feature with Dead Aim) and a ridiculously censored DVD from Reel Corporation. It’s a shame about the Reel Corporation one, as well, since it has the nicest picture quality out of all the versions I’ve seen.

Yes I just watched… must be taken from tv, they also mute it whenever someone swears, even something like “ass”, and it cuts for commercial breaks

But they’ve had a few good releases, like Heaven’s Gate is the same as the criterion version