I just ordered Forty lashes less one, the book that Tarantino got some inspiration for his new film.

Do you guys have any other recomandations? 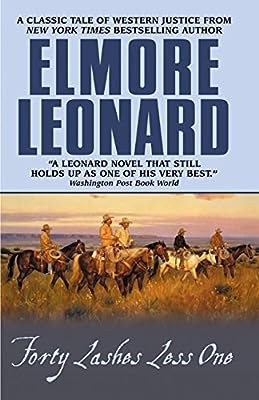 The hell called Yuma Prison can destroy the soul of any man. And it's worse for those whose damning crime is the color of their skin. The law says Chiricahua Apache Raymond San Carlos and black-as-nig ...

Seriously? Does nobody read anything here?

Reviving this thread because I’d actually like to see some discussion of the topic.

Seriously? Does nobody read anything here?

I think the word that scared everyone off is “literature.” Blood Meridian is definitely literature with a capital L, so if that’s the kind of thing you were after, I would recommend it, too.

I’m actually interested in novels, whether literary or not, that trade in Italo-western tropes. You have the Dollars novels, but there has to have been some fiction that took its cues from this type of movie. What were those novels? I’d like to read them.

Haven’t read that one but I have read a number of Doctorow’s other (non western) novels and he is an excellent writer so would expect it to be very good.

Do you want authentic western literature or books like spaghetti westerns?

Clarence E. Mulford wrote 28 novels from 1906 to 1941. He was one of the first writers to invent the genre we now identify as the western. I believe he was more influential than even Owen Wister (The Virginian, 1906). Each book is written with meticulous care and is a masterpiece of western writing, true to frontier life and authentic in its behavior, syntax and motivation. The books bear little or no resemblance to the Hopalong Cassidy films adapted from them.

The Round-Up and Trail Dust are my personal favorites, and I think Mulford’s best books.

Another early 20th century author from the American west is Emerson Hough. Among his best books are 54.40 Or Fight, The Covered Wagon, and Heart’s Desire. He wrote from 1890 to 1924.

For historical western literature, prohibition journalist Walter Noble Burns never ceases to inspire people, and all three of his western books have remained in print since the day they were published: The Saga Of Billy the Kid from 1926, Tombstone: An Iliad of the Southwest from 1928, and The Robin Hood of El Dorado from 1931. Along the same lines, Stuart Lake’s Wyatt Earp: Frontier Marshall from 1932 started a ball that’s still rolling today.

Like Mulford, Alan Le May wrote about what he knew and experienced and inherited. He wrote about central Texas. Two of his best novels are The Searchers and The Unforgiven. The books are a little different than the movie adaptations, but you won’t be disappointed in them.

Another fine writer from the same period (1930s-50s) was Frederick D. Dillen who wrote under the pen-name of Luke Short. He put the subtext ahead of the clear text, so naturally dramatists loved his stories, which reflect a more modern sensibility than Hough, Mulford or Le May.

Every western novel by the late Elmer Kelton is worth reading, especially those novels from the 1990s and 2000s. He’s another deep Texas author who is highly regarded by his contemporaries. Loren D. Estleman also writes excellent westerns occasionally.

Robert B. Parker, a crime and mystery writer best known for the Spenser For Hire novels and TV series, who also died recently, synthesized a lot of western history into a fictional trilogy about a pair of town-tamers that are worth reading. Each novel is named after the town in which it is set Appaloosa, Resolution, and Brimstone. There’s a fourth which I haven’t read, Blue-Eyed Devil. Parker’s female characters are more sophisticated than in most westerns, and show considerable research and discernment. He’s dialogue-heavy.

A handful of the Mulford novels are available at Project Gutenberg, for whomever’s interested. And I’d second the recommendation of Robert B. Parker’s Appaloosa series. They’re a little loose in the plot department, but are very readable.

@ Richard:
You obviously know a lot about Western literature, so what do you think of Ernest Haycox? I for one find his Westerns very enjoyable, a fair few of which were adapted into films such as Union Pacific, Stagecoach and The Far Country.

I always enjoyed Ernest Haycox. A committed westerner. I read everything he wrote in my teens. Still have all his books.

I’m actually interested in novels, whether literary or not, that trade in Italo-western tropes. You have the Dollars novels, but there has to have been some fiction that took its cues from this type of movie. What were those novels? I’d like to read them.

Morgan Kane is a great pulp western series from Norway. It started in 1966 and I’d say it has quite much spaghetti western influences.

Morgan Kane is a fictional western character and antihero, created by Kjell Hallbing under the pseudonym Louis Masterson. The Morgan Kane series has become the biggest success in modern Norwegian leisure reading literature. The 83 books in the series have sold 11 million copies in Norway alone, in addition to being published in ten other countries - totaling 20 million copies sold. Since 2011, the Morgan Kane series has been available also in the shape of eBooks published by WR Entertainment. The...

Scraping the bottom of the cracker barrel, the only books I can think of influenced by spaghetti westerns are the “Edge” novels attributed to George G. Gilman.

I agree, those are pretty awful. Doesn’t stop them from having a large and very vocal fanbase but, yes, terrible.

Morgan Kane is a great pulp western series from Norway. It started in 1966 and I’d say it has quite much spaghetti western influences.

Ah, interesting. And there are English translations, though they are seriously out of print. Time to go looking on the usual websites. Thanks for the recommendation!

Hopefully they make some new prints, at least there’s e-books available. It looks like Morgan Kane is making sort of comeback since they’re planning to make a movie too.

I seriously need to work on my reading comprehension because I completely overlooked the part of the Wikipedia entry that talks about ebooks. Whoops.

Anyway I dropped the first book El Gringo onto my wish list, so we’ll see what we’ll see.

The Searchers (which Richard W. mentioned earlier) is excellent, as is True Grit. Blood Merridian may be an acquired taste (I didn’t like it that much, but did quite like All The Pretty Horses).

Lonesome Dove is a classic (I prefer it to the TV adaptation, although I did enjoy the adaptation).

I’m currently reading Elmore Leonard’s “The Complete Western Stories”, which is a collection of short stories (20 pages or so each). I’m enjoying it so far. I believe he wrote the stories for 3:10 to Yuma and Hombre among other things.

Welcome to Hard Times is a memorable and constantly surprising tale. Different from the average western fare and yet such a solid traditional western one wishes Doctorow had written more in the genre. The movie adaptation (1967) was a plodding mediocrity. I hear the Coen brothers got hold of the rights now, but that could be just a rumor. I hope so.

Once a year The Western Writers of America, an association of professional writers who specialize in the genre, and who are mostly westerners themselves, vote on the best books. You’ll find a lot of recommendations in the Spur Awards:

Welcome to Hard Times is a memorable and constantly surprising tale …

thanks, i’ll look at the links - i have Welcome to Hard Times finally in my hands, so, i’m starting to read it - haven’t seen the movie, but from what i’ve heard it is like you say - a mediocre

I’m currently reading Elmore Leonard’s “The Complete Western Stories”, which is a collection of short stories (20 pages or so each). I’m enjoying it so far. I believe he wrote the stories for 3:10 to Yuma and Hombre among other things.

That’s an excellent collection of stories. Lots of good, memorable moments to choose from and all have that distinct Leonard touch.