And Kinski was probably a guy who would force a director to bring such a line into a film.

The scene in which Gary meets up with the spectacled actor for the first time (…) I just rewatched the scene and I’m certain the line in English is “A long rest, and lots of sex”.

Then things are exactly as I wrote in Reply #73 (arbitrary translation/adaptation).

[quote=“YourPallbearer, post:80, topic:495”]They did have sex in them days ya know

If you’re referring to the crassness of the line then I understand. The Spaghettis were never big on this kind of dialogue even though, historically, those folks did curse like sailors.[/quote]
I was refereing to the actuall way it was said; I’m not completely sure the word “sex” would have been used in such a way in the West back then.

Then things are exactly as I wrote in Reply #73 (arbitrary translation/adaptation).

Because i checked Fistful of Dollars on the weekend my appetite for some spaghetti western stuff grew and i decided to check this movie from the Alternative Top-list.

One main reason why i decided to finally check this was the fact that Klaus Kinski plays the main character here. Kinski does great job and especially the scenes at the beginning of the movie are my favorite ones (when he is free again). Antonio Margheriti tries to create something different here, i could clearly see that. Church bells are ringing, crows start to croak and the storm hits the little town. These are the main elements of this movie which has quite dark mood to it. But still the main plot has been used many times in different spaghetti western movies, so it’s a typical revenge story. All in all God Said to Cain doesn’t offer anything magnificent like Corbucci’s or Sollima’s westerns, but it’s still a decent and definitely watchable spaghetti western and those dark elements were nice addition to the film’s style. 3 stars out of 5 from me.

I must say bravo for this one.
It really has a lot going on:

Only elimination of Acombar’s men in the middle is little bit repetitive, and it would probably be more effective if they could film tornado instead of fire destroying the house, but overall I like this one very much.

Absolutely, the gothic mood of this one coupled with the sense of impending doom make this my favorite Italo-Western not directed by a Sergio.

One thing I would like was different in the movie is the name of the main character. I mean, birds are screaming when they say…Gary Hamilton!

It sounds too generic and plain, I wish they came up with name that sounds more sinister and symbolic. Something like Crowe, Cross, I don’t know…

One of my favourite spags.Kinski there has a different and unusual role with big success.I agree with titoli with the most has wrote especially with the first one.I love the begininng with that gospel and the scene in the camp that give us a deep religious emphasis (don’t forget the title) mixed with passion for revenge and vigilante justice.

Margheriti’s directing is very good and a bonus for the movie is the fact that he had transported the haunted atmosphere of his giallos/horrors with a big taste of freshness.A ghost town with a drifter full of hate for what they have done to him.Without a doubt a very good s.w. to begin serious after 3 Sergios works.

I watched this film about a year ago via one of the Mill Creek collections and I really enjoyed it. Even though the pan & scan picture quality was abysmal, I enjoyed the movie. Now after watching the Wild East disc, I can easily put the movie in my Alt Top 20.

Double K was awesome. He easily pulled off the grim revenger. It was nice seeing him in a (anti) heroic role. Antonio Margheriti’s direction was wonderful. The gothic horror undertones was masterfully handled and gave the film an incredible mood. Plus any Spaghetti Western with a death by church bell is awesome in my book. 5 stars.

A nice movie…
I liked the character of kinsiki

5 stars from me. This is about ultimate spaghetti western and as huge fan of italian horror movies I did got extra kicks from certain elements.

I did see this from some budget compilation 1st time and quality was from donkeys ass but still impressed how great movie is. Was happy to receive wild east disc few days ago 8)

[quote=“gringo_bastardo, post:93, topic:495”]5 stars from me. This is about ultimate spaghetti western and as huge fan of italian horror movies I did got extra kicks from certain elements.

I did see this from some budget compilation 1st time and quality was from donkeys ass but still impressed how great movie is. Was happy to receive wild east disc few days ago 8)[/quote]

Hows does the Wild east disc look? I still haven’t gotten around to getting it. I have the Franco Cleef version which most say is better than the budget disc.

Hows does the Wild east disc look? I still haven’t gotten around to getting it. I have the Franco Cleef version which most say is better than the budget disc.

Well, I am not good in tech issues but to my eyes it looked pretty damn OK. Good colours and picture quality. Widescreen but I bet that you already knew. Nothing to complain in audio track either. I do not know that FC version but compared to version in vigilante western collection for that I would give 1+(+ comes because it`s not fullscreen) and wild east release 4+. Other film twice a judas is good flick.

The mirror scene is influenced by Orson Welles film The Lady from Shanghai.

True, but Welles was influenced by Chaplin, who used this ‘mirror thing’ in one of his filmsI’m not sure which one, could be The Kid

The first one was The Circus (1928), silent movie directed by Charlie Chaplin. This comedic scene is available on YouTube, see below.

The firing a bullet into a mirror ingredient in a dramatic context comes with Welles’ The Lady from Shanghai.

And God Said to Cain could be the first to introduce simultaneously - and successfully - the blaze element.

There’s another difference, in E Dio disse a Caino… we don’t have a mirror maze/house of mirrors but rather an unusual, fascinating hall full of mirrors inside a private home. 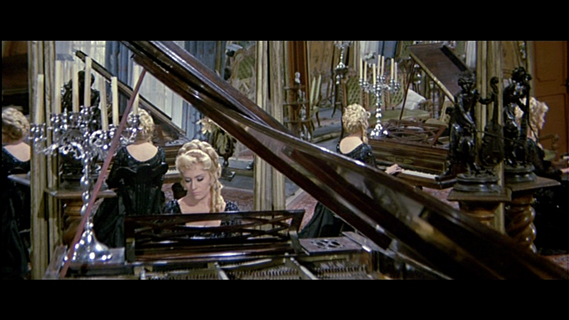 A few years earlier in Anthar l’invincibile - released at the end of June 1964 and considered the worst of his 56 films together with Space Men - Margheriti directed a house of mirrors sequence with Kirk Morris (Sapevano solo uccidere), placed at the end of the movie.

Curiously, in the years 1973/74 there were three big productions containing house of mirrors scenes: Enter the Dragon, Zardoz and The Man with the Golden Gun.

Curiously, in the years 1973/74 there were three big productions containing house of mirrors scenes: Enter the Dragon, Zardoz and The Man with the Golden Gun.

As the story goes, Upon Gary Hammond is released from prison for a crime he didn’t commit, and the first thing on his list is to find his former friend Acombar and take his revenge once and for all. Theirs a lot to enjoy here, with a high death count, and gothic imagery. I narrowed it down to five scenes. The first being Gary and Dick’s conversation on the wagon. The secoond is Gary’s release from prison. The Third involve the townspeople helping Gary. The fourth is by far the most haunting, where Gary enter’s Acombar’s house. The fifth is Acombar rounding up thirty or so men. Acombar now a wealthy man has 30 or so men at his calling to for protection. Great film, a true gothic film, but it should appeal to all Kinski fans and all spaghetti western fans as well.

It was mentioned earlier in this thread that it seems to be missing a scene. It’s a very nicely shot one, but basically gives the plot away which possibly explains why it was excluded later.

I still find the fact that this scene is missing from the French release very interesting. The film is basically better without the scene so I wonder which markets kept the scene and which removed it?