Does anyone have a copy of the U.S. 20th Century-Fox ‘video rental library’ serial-numbered clamshell edition (c1982) of A Fistful of Dollars?

I’ve been searching for this release for a few years to add to my collection. Will pay up to US$200 for a copy. Not so much interested in the condition of the videocassette; just keen to secure the box, or the sleeve at least.

This edition is uber-cool from the video-collecting perspective.

This edition is uber-cool from the video-collecting perspective.

please do enlighten me

The Video Rental Library range from 20th Century-Fox Video was leased - not sold outright - to video libraries. They were marketed for a short period in 1982 before being withdrawn when 20thCFV adopted the ‘direct sale’ distribution model.

VRL titles were packaged in sturdy European-type ‘small’ clamshell box; the outer plastic skin was heat-sealed to the black plastic case (to prevent theft or loss of the sleeve that was placed between the two). The text, Video Rental Library, was printed on the front, rear, and spine of the sleeve).

Security stickers, with matching serial numbers, were glued to the case and the videocassette. Although not foolproof, the presence of the stickers affords a greater degree of provenance with regard to the ‘original as-supplied’ videocassette.

Only a small selection of titles were issued as VRL editions. Nobody seems to know exactly how many titles were released; I have 14 titles in my collection, so there were at least 15 titles.

The clamshell package was abandoned when 20thCFV moved to ‘direct sale’ distribution in 1982. ‘Sale’ editions were packaged in two-piece all-cardboard containers which comprised an outer slipcase and a ‘drawer’, housing the videocassette, which slid inside the slipcase.

VHS and Betamax editions of the ‘20thCFV VRL’ A Fistful of Dollars were distributed - each in a different-sized container (‘tall’ clamshell for VHS; ‘short’ clamshell for Betamax - across the board).

At the time that the VRL editions were in circulation, the ‘video library’ was nowhere near as ubiquitous as it would become only a year or so later; ergo, a proportionately smaller number of VRL units were ever in circulation - and not all titles in the range were in equal demand by video libraries e.g. there are at least a half-dozen copies of the VRL edition of ‘Star Wars’ consistently listed for auction on ebay at any one time, yet there is a dearth of other VRL titles.

So, the 20thCFV VRL edition of A Fistful of Dollars is ‘uber-cool’ because it’s the first North America home-video edition; it’s genuinely rare; it’s uniquely and sturdily packaged; and its existence is virtually unknown.

Hope this info is of some use to on or two of the collectors who frequent this board.

Cool, do you have an example picture of how these look(ed) like?

Is this what you’re looking for? 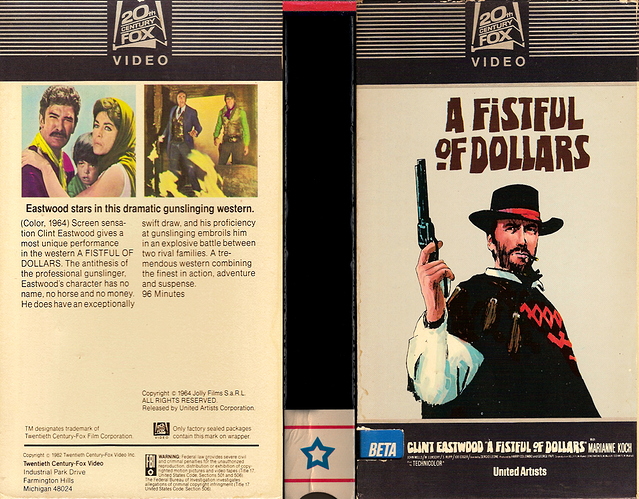 Here it is on Ebay for like 20 bucks. If it’s what you’re looking for I guess it’ll save you some money, unless you want to give me something for my time.

Find many great new & used options and get the best deals for rare 1st ed. 20th Century Fox release A Fistful of Dollars (1964) VHS Eastwood at the best online prices at eBay! Free shipping for many products!

Thanks for taking the time to help me. Unfortunately the ebay-seller has erroneously described the tape as a ‘1st edition’, when it is actually the 2nd edition (it is, however, the first ‘cardboard box’ edition).

I’ve created a ‘mock-up’ of the what the first ‘Video Rental Library’ plastic clamshell-case would approximately look like. 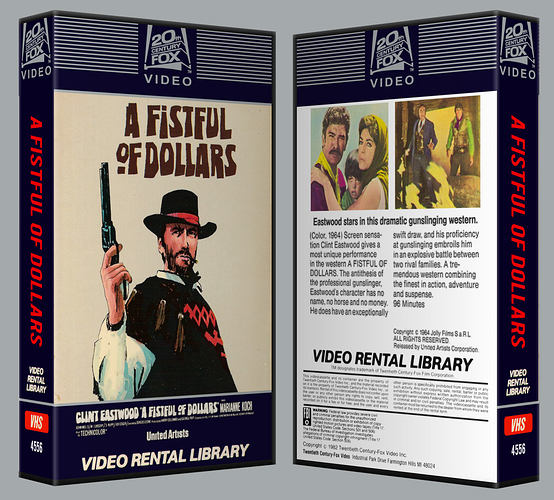 I see, too bad it wasn’t what you are looking for, but I’m glad to have helped, at least we know what to look for now.