These may have had some resonance with me getting into Spaghetti Westerns - so many of the films having some reference to the American Civil War.
You’d have to be of a certain age to know first-hand of these (but I am).
I think they tried to ban them for being so graphically and grittily violent (a bit like our beloved films then), but it didn’t stop me having the set when I was but a nipper. Released on us kiddies about the same time (coincidently(?) as spaghettis, I thought they were fantastic. Without having a good look at the link I’m about to put on - I remember particular ones - there’s the pathos of ‘brothers in death’ (? I’m guessing), which has that ‘Blondie passing the fag’ feel (GBU). There’s ‘Raid at Dawn’(?) which shows the cheating-ness of war (something we weren’t brought up to believe in), and ’ a painful death’(?) - shockingly nasty.
I wish I still had that set now - I was looking on ebay but they go for quite a bit. (I won’t be getting a set yet - Almeria calls first).
We hear so much about how violent images corrupt and we become blase to the reality and pain, but these cards both horrified and fascinated me at the same time … but probably made me quite pacifistic in attitude, overall.
Anyway - anybody else remember these?
www.bubblegum-cards.com/Civil-War-News/index.htmlhttp://www.bubblegum-cards.com/Civil-War-News/index.html

Do I ever remember them. My brother and I loved those cards. Some came with Confederate money as I recall. (Not real obviously but equally worthless)

Those images have stayed with me my whole life and, uncannily, especially one of the first ones you have put up here. ‘A Painful Death’. That bloke being impaled on wooden stakes was not what you would expect to find in a pack of bubble gum. Strangely, I was collecting these at about the same time, and with the same enthusiasm, as I was collecting cards featuring The Monkees. (although possibly the Monkees ones were a year or so later) I guess, I was eclectic in my tastes even then.

Funny thing, Ace High my compadre…these cards, all about the American Civil War…were either a very limited item here in the USA, or they were never available. I had never heard of them before, either!

The Monkees cards (with the banana flavored gum!)…yes, those I remember.
Green Hornet gum cards, Batman gum cards, The Beatles, James Bond, Man from UNCLE, Mars Attacks, all of those I recall…but, Civil War News…nope!

…these cards, all about the American Civil War…were either a very limited item here in the USA, or they were never available. I had never heard of them before, either!

Jus’ been nosin’ around. Seems that these cards were originally released in America by Topps in '61 or '62, later to become popular in UK from '65 - from A&BC. 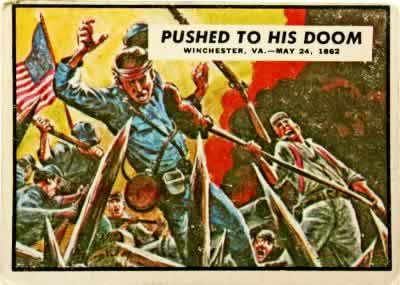 Maybe they never had 'em near you Chris, or you were just too young!

I started collecting baseball cards around '67(I’m 49) and the different varieties would be displayed together i.e. baseball, batman, Monkees, etc. - I would definitely have noticed Civil War cards as I have always been a CW buff. They weren’t on the rack(in this part of Texas) during my childhood. I’ll have to check 'em out. Thanks for the info, Reverend.

I would definitely have noticed Civil War cards as I have always been a CW buff. They weren’t on the rack(in this part of Texas) during my childhood. I’ll have to check 'em out. Thanks for the info, Reverend.

You’re welcome Brother. I was just reading part of the interview with the creator which I’ve linked directly here …
http://www.bobheffner.com/cwn/a_interview.shtml

I’ve linked them directly in case the other link changes or disappears.
I’m fascinated, and didn’t realise that the American Civil War should have such a broad appeal - or as Les Brown (creator) says -
"{Len} Yes…We worked with a company in England: A.B&C. Limited, I believe their name was. They found it more efficient to print the cards a little smaller. They reprinted many of our 1960’s sets, only a little smaller. I remember seeing them do Mars Attacks that way too. I think they paid Topps a royalty plus a cost for the artwork. They had great success with Civil War cards we were told. That surprised Woody and myself because we wouldn’t have thought that British children would give a hoot about our Civil War…But I guess blood and guts and good artwork will win every time."

Hmmm! “blood and guts” … yep - works for me! But as I (think) I said - the horror of some of these cards brought out an almost pacifistic streak into my childhood beliefs - (mind you it didn’t stop me getting into my fair share of rucks tho’).

Those Spanish cards tho’,(unlike the French) are extremely tame by comparison. Little “blood and guts” are obvious, and many cards have been redone. Maybe it’s to do with Spain’s economic boom of the time and the Spanish, still under General Franco’s control, maybe not wanting to be reminded of their own civil war?

Well, they were definately released in the States as this box shows … but as stated by Len …
"The cards, which sold for 5 cents a pack in 1962, were quickly denounced by parents who were shocked by the bloody, gory, graphic (cool!) pictures, and were pulled off the market after a very short time. The cards that survived the years are now worth up to about $2000 or more for a mint set! A single wrapper (the first thing that was thrown away when an eager 8-year old ripped open the pack to see the fantastic cards) may be worth $1000 or more now!"
Pheww! :o

i have one of them cards if you want it

Havn’t been on the forum for a while and am jus’ checkin what posts I missed … but thanks for the offer. Nice to know somebody else collected them and knows what I’m on about. Welcome to the forum btw.

[quote=“lisdar, post:13, topic:1037”]cant belive i have found information on these cards after all these years
my whole life revolved around these cards when i was younger
but don.t remember the money I collected all the cards with the gum
what year was it in united kingdom[/quote]

my whole life revolved around these cards when i was younger

I felt the same way about beer when younger, and still do.

The postman delivered the American Civil War to my door a few minutes ago. I suppose I had to get a set eventually - after all it’s been more than two years since that I started this thread, lusting after them.
The set I’ve got is a mixture of the 41 and 44 mm A&BC sets released from 1965 in the UK (the size only relates to the back ‘newsprint’ area and NOT to the overall dimension of the cards or front image.
To compare, and to prove the existance of, I’ve also been given 2 of the 1961 American originals by Topps. As can be seen, (the ones at the top*) these are quite a bit bigger - very nice too, but very expensive to get a set I’d imagine! :o
I’m happy with my set - another bit of mid-life crisis in place. 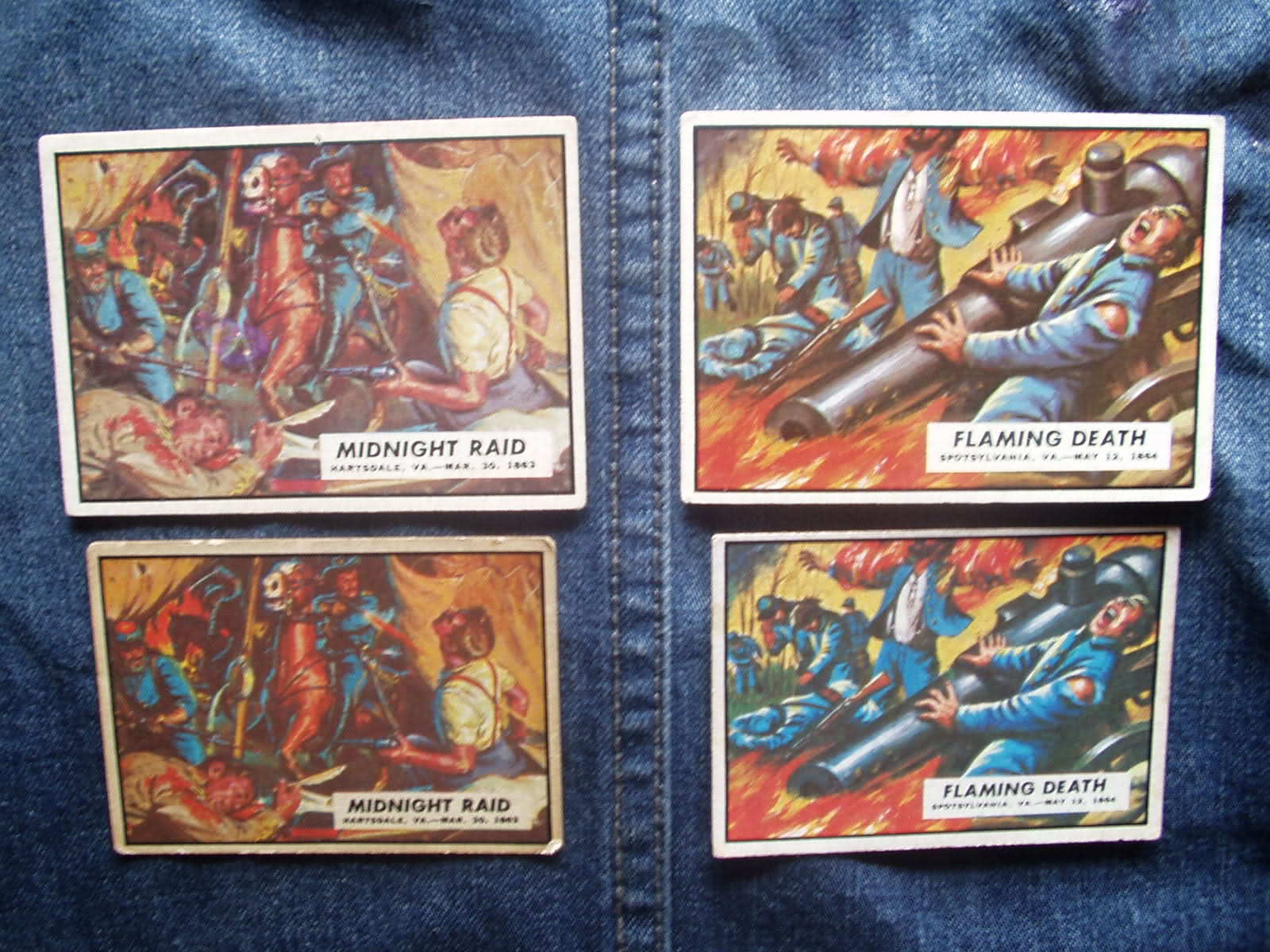 I’m jealous Rev.
Are they as gruesome as we remembered?

Nice ones, Rev!
Those American cards probably are expensive as can be and more than a bit rare…seeing as how no one I know has ever even heard of them!
They look great!

Are they as gruesome as we remembered?

They are still quite shocking really. But seeing them afresh probably triggers historical feelings of the amazement I felt as a kid. Shit, I was still at junior school, in short pants, when these came out.

Just found some 30 old A&BC civil war news cards that I have from my grandmother, any ideas on how to go about selling them?
They are in relative good cond seeing they’re age.
P.S. Chris your quote was my High School motto from here in Aus. all those years ago, well 20 anyway, quite a coincidence.