Tomorrow 20th of July it’s been 40 years since the crew of Apollo 11 reached the moon. 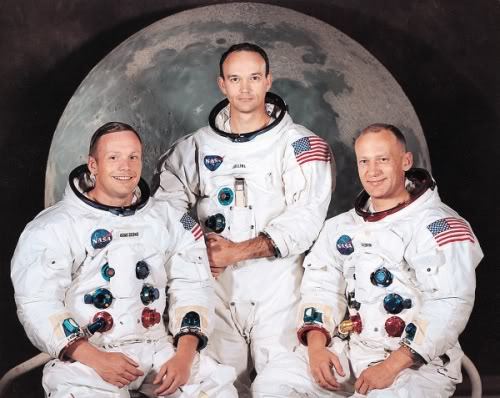 Are you one of the non-believers, Rififii ?

SomeWhat, but I wanted to be one of the first to bring it up…

But MythBusters stidied it and declared the myth of false. But you are certainley entitled to your beliefs.

But MythBusters stidied it and declared the myth of false. But you are certainley entitled to your beliefs.

Oh the Myth Busters, then it has to be true.

I think that is one of the stupidest, nonsensical conspiracy theories ever. Look at the interviews with the Astronauts. If you have any ability to judge the reliability of what ones says by studying them when they discuss it, there is no doubt. BTW, they are talking of going back there. That would be cool to see with today’s technology.

I think that is one of the stupidest, nonsensical conspiracy theories ever.

Yeah who think that not me of course :-[…

I just like to have fun with such things…

I just like to have fun with such things…[/quote]
I love to challenge assumption as much as anyone (speeded up car chases ;)) But not getting me to bite on this one.

Don’t get me started on ghosts, my house has had some haunted activity in our presence. SERIOUSLY! I have stories & a pic of some weird energy after a sighting. I know there are some non believers out there/here but believe me as a sane & ususlly coherent individual, IT’S TRUE.

maybe, it’s easier to spot when zoomed in & it’s faint but there. I could share some stories at the risk of getting laughed at by some here (which I really could care less about).

Lets go for it!

My Dadand Mom were in Chicago driving back from a get together at a restaurant with friends. Very late but sober. They were driving along a deserted road when they saw a girl who looked as if she came from a prom. A very distressed look. They drove past a little ways but not out of site. And when my Dad looked back to go give her a ride…she was gone. Nowhere to be seen! Both are ghost sceptics but swear to the truth of that story!

And Chicago is known for Resurrection Mary and one of the most “haunted” places in America, Bachelors grove. I’ve been there. Swampy andcreepy.

Back on topic…the moon landing thing makes me genuinely misty eyed.
I remember following the whole Apollo mission thing as it unfolded as a kid. From Apollo 8 onwards to the moon landings and it filled me with a sense of wonder as well as a belief that there was nothing we couldn’t achieve. And yet, 40 years on space exploration is an historical topic. We talk about it in the past tense and I have to explain to my kids what it was all about like I was teaching ancient Rome. This is a bizarre state of affairs in my opinion. And one which I genuinely never expected to see. As a 9 year old watching the first moon landing on fuzzy black and white TV I always assumed that this was just the beginning. If someone had told me that we would have quit bothering within 5 years and that by the time I was nearly 50 we would have gone no further I would not have believed them.

Well, at least America won the Space Race of the 1960s, putting a man on the moon before the decade was over, as president Kennedy had declared.

This was quite an achievement.

Then in the early 1970s came the economic recession and oil crisis, failure to win the war in Vietnam etc, stuff that probably affected the space projects.

On the other hand NASA had great success with the Space Shuttle in late 1970s/ 1980s, at least until 1986 when Challenger blew up shortly after take-off, killing all of the crew.

This was of course a big tragedy and set-back for the shuttle project.

All true of course, Lindberg

Like Phil I remember how excited people were in '69
I also remember an interview with a man of 60-70 years old (on TV) who was asked for his greatest wish: he said he hoped he would live to enjoy the first step on Mars. That was the atmoshere in those days. A teacher in school, who was crazy about the space race, told us everything about the trip to the moon and a possible future trip to other planets. It seemed only a small step for mankind. Now I fear I won’t live to enjoy that first step on the red planet …

Some other notable people and animals from the Space Race era:

Russian ‘space dog’ Laika who became the worlds first kosmonaut in Nov 1957 with Sputnik 2. Sadly the capsule was never intended for re-entry to Earth, so Laika passed away in space.

‘Space dogs’ Strelka & Belka with Sputnik 5 in Aug 1960, who returned safely to Earth from their orbit in space.

Kosmonaut Jurij Gagarin who was the first man in space in april 1961 with the Vostok capsule.

Astronaut Alan Shepard, first American in space in May 1961 with the Mercury 3 capsule.

John Glenn, first American who orbited Earth, in Feb 1962 with the Mercury 6 capsule.

Laika must have made quite an impression in Sweden

[quote=“scherpschutter, post:18, topic:1882”]Laika must have made quite an impression in Sweden

Does the band still exist? I’ve seen them live in the 90s.