This year is the 100th anniversary of the Mexican Revolution, that as we all know was the source of inspiration for several SW that we all love, many Italian (and not only) directors with a political agenda took advantage of the love for western from the public combine with a favourable historical (for cinema scripts I mean) chain of real events during the Mexican revolution, to make the perfect analogies and metaphors in their films with the social revolution lived in several countries throught out the sixties.

What do you know about the Mexican revolution apart from Tomas Millian and Volonte were on it?
In a very simplified and simplistic way I will try to explain the chain of events that made the revolution possible and its results.
The rebellion that started for all effects in 1910 against the long time dictator (for more than 33 years in power until the date) Porfirio Diaz, was first not more than a small wind before it transformed itself in a major storm.
According to Enrique Kraute author of a most brilliant book trilogy about Mexican history and that I quote, were several the causes and Revolutions that hit Mexico in the second decade of the XX century. The 1910 insurrection of Indalecio Madero (not Professor Xantos then) against Diaz opened a historical precedent of changes and transformations that is best know as the Mexican Revolution, in reality the revolution was the sum of conflicts and rebellions of different backgrounds: social and farmers ones, from the outcast native population, religious ones, from the bourgeois… many ones, as numerous as the several Mexico’s that existed at the time, everyone wanted the rebel against something those days.
In any case the revolution curved around two main axis one on the South that was a real uprising of the campesinos (mostly Indians or native people (as you prefer to call it) for land and better conditions of life (they lived in what can be called perfect slavery conditions) and in the North that was more a rebellion of the tierratenentes or landlords many of Indian origin but not all. Both insurrections charged against a way of making politics that was rotten since the time the Mexican state was born back in 1821.
Another constant thing of that decade of revolts and uprisings, was the enormous violence that the country suffered, no one really knows the exact numbers but calculations give a number of more than a million deaths some even go further, and give numbers more closer to two million, so when you all see that body count of Mexicans in Almeria with the Gatling guns and the Hotchkiss shooting around that was no joke in real life I’m afraid.
Other characteristic was the constant involvement and interference from the US (another analogy for SW), not only defending the interests of their citizens in the country and their own in the process, but also cause of a dynamic frontier life.
The ambition for power was constant and violent; the military power and not only was always alert against the main protagonists of the rebellions, that ambition in most of the cases ended up in bloodshed from 10910 to 1929 almost all of Mexico presidents and also the main revolutionary leaders ended up murdered.
The Mexican Revolution started as will to restore to old liberal order against the church and the more immobilise forces as Madero wanted, to derivate into a Social revolution proper of the XX century . 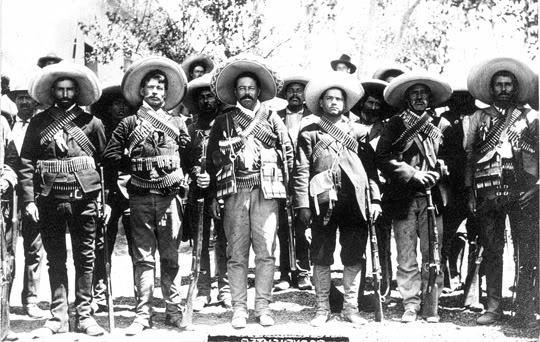 CAUSES
The large presidency of Porfirio Diaz that preside over Mexico as an old Patriarch, with authority in his first time in power (1876 to 1880) and then from 1984 to 1911 was more characterized by a general development well accepted by the country cause it was long blooded by the defeats in the wars with the US and for the constant confrontations and small wars between conservatives and liberals, unionist and federalists. But with this development, justice and more freedom and better living conditions to the indigenous and peasants never arrived.
Diaz got his back covered by the landlords, the church and all those contrary to Liberal reforms also an important group of young technocrats called the “cientificos” (Scientifics). Even though with a very controlled freedom, this was a period where Mexico catch up with the rest of the developed world mainly the new one, and had even a certain economical grow.
But in 1910 the businessmen from the north regions especially from the new iron industry (a resource that Mexico had plenty), confronted the power of the cientificos and their alliance with the foreigner (Europeans and US). By 1910 Mexicans in general had the impression that Diaz had delivered the country resources to the foreign capital, also the new Mexican bourgeoisie (indifferent in general to serious social inequality that the country suffered), was tired of the lack of liberty and the indulgent style of Diaz government, in the end the new educated middle class that the recent years of prosperity created, now wanted themselves to reach the political and economic power. So the answer to that middle class was a man called Francisco Madero a rich landlord from the North that denied the patriarch politic style of Diaz, in 1908 he write a book La sucesion presendicial de 1910, which was a big exit in the literate people that wanted the democratic changes. In response Diaz arrested Madero against the will of the majority fearing that we might win a free election. Doing so he prevented Maderos from participating in the elections. 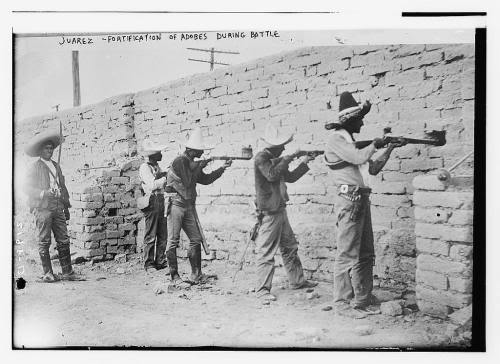 Well this more or less well explained the story of the Mexican revolution. The main consequence apart from the death and destruction was the 1917 constitution and the creation of the PRI in 1929 Partido Revolucionario Institucional that was in Power for almost the rest of the XX century, in what was called the perfect dictatorship.

Also of importance was the use of modern warfare in a very poor country, and on people/soldiers that were not used to such equipments, one the reasons why the death tool was so high, machine guns heavy artillery even flares and armoured cars marked it’s sinister presence in the Mexican battlefield. Also of importance was the part that women took part in the war, the so called “soldaderas” or “Adelitas” who took active part in the revolts and uprisings something not so common in any part of world till the date.

Most of what we called Zapata SW were more Villa SW cause it represented mainly the war in the North near to the US border so more plausible for the scripts with cowboys, as far as I remember and correct me if I’m wrong the only film that I think mention or took place in the South and Zapata war (and I’m probably wrong), was Viva Maria this cause of the caravan entered Mexico by the South.
By starting this thread I’m just trying to full knowledge of the Mexican situation in that period, and in the process help everyone to understand why it was such an important inspiration for Spaghetti Westerns

In any case my favourite Zapata movie is Giu la testa/A fistful of Dynamite is not all historically incorrect and I liked it.
Anyway this Mexican Revolution story could made a film, in this case it made several.

Levantando en aire los sombreros
Vamos a matar, vamos a matar, companeros
With so many deaths this was really, really exact. 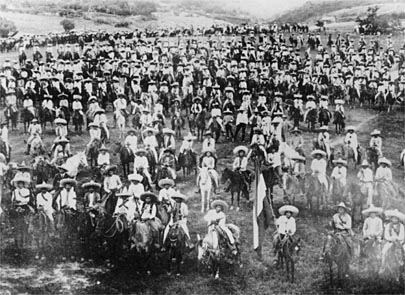 sorry to dig this up from so far back, it appeared on the brilliant if wildly random “Suggested Topics” section at the bottom of another thread (and it’s posts like this which cause me to describe the “Suggested Topics” section as “brilliant”). I wasn’t a fixture at the SWDB back in 2010 so I didn’t catch this post back when El Topo wrote it and it appears to have passed everyone by (or at least, it’s such a comprehensive post there was little more to add at the time by those who read it) but, late though I may be, I still wanted to thank El Topo for a fantastic read there. I’m not too bad on the American Civil war, but the Mexican Revolution is something about which I know next to nothing beyond the frequent uses of it in spaghettis (which I’ve never considered to be an entirely accurate historical resource, God bless 'em), but about which I’d like to know much more. Alas, it’s found its way onto my lengthy “to do” pile of things I’d like to learn but never seem to get around to, but that post may have inspired me to finally take a closer look.

Yes, a nice blast from the past.
I remeber learning all this stuff when I did Hispanic studies at Uni many years ago. The Mexican Revolution, like much of Latin American history, is a story full of blood, betrayal and revenge. Not surprising it fitted the bill for some Spaghetti action is it.

History and militar history in particular, was always (still is) an hobby of mine. Back in 2010 I still had the time for those reflections, I miss the days when I was my own boss, these days not even time to watch films.

Yes. Thanks for posting.

For anyone interested in reading more, I really enjoyed this book: 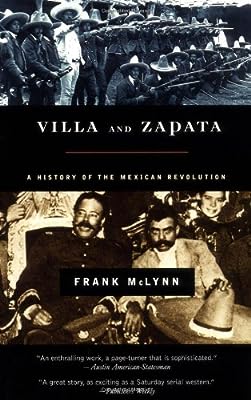 Recounting the decade of bloody events that followed the eruption of the Mexican Revolution in 1910, Villa and Zapata explores the regional, international, cultural, racial, and economic strife that m ...