Saludos amigos! I’m new on this forum, so I thought posting my first new topic would be a good start. As a huge history nerd, I’ve been trying to calculate the setting years of several SWs, and I thought I could share my speculations here. Feel free to make inputs or add new films!

Note: I’ve decided to overlook anachronisms in which firearms are used.

What do you think?

Re The Big Gundown, perhaps the camera used to take the family portrait at the wedding might give you some clue ?
It’s an interesting area to ponder, but historical accuracy in these movies, European or American, was never very high on the director’s agenda.
But it’s definitely a fun piece of observation - and, welcome to the SWDB.

Welcome aboard! I have a degree in history, highly emphasized on westward expansion, so I make myself not pay too much attention to the timeline of Westerns as I’m afraid it will ruin the experience for me. I still can’t get passed the issue with how all of the six-shooters (which means, of course, that they hold six bullets) fire ten or 15 times without ever having to be reloaded though.

Benvenuto Amigo, there’s lots to enjoy here, and a lot of nice folks to chat with and ask questions of.

Most SWs, at least from my perspective anyway, seem to always be set in a kind of mythical Wild West age, so pinpointing where they occur in terms of history is kind of mute. I like that aspect of them in that they’re true to many elements of the period, but also aren’t intricately accurate.

Some films that have a definite period setting would be the following:

I’d like to thank you all for welcoming me on this site so sincerely! Yes, I know that these films weren’t trying to be historically accurate, but it’s fun to try and put two and two together and figure out a possible setting year for these films. Moreover, the core of my love for westerns is really the historical old west. Reading about actual outlaws, bounty hunters and shootouts is as inspiring to me as watching a great western.

As for the wedding scene in The Big Gundown, I’m afraid I’m too ignorant of the difference between a camera from like 1875 vs one from 1895. I’ll have to research about that.

Kinda late on this, but I agree with your conclusions! I also think the costumes of these characters make the figuring on the time periods difficult. Especially when it came to the women. IMO, the quickest way to determine a time period is to look at them 'cause women’s fashion evolved waaay faster than men’s fashion, so each period is more unique than the other.

Oh, the wedding scene in The Big Gundown too, on that ballroom floor… I saw 1860s, 1880s, 1890s - one lady ain’t even have any kind of dress cage on. Very confusing. But like y’all said, these westerns weren’t meant to be on the nose

He didn’t. This Howard Hughes is a British film historian. I was also rather confused by the name when I began to hear the name as I entered Spaghetti land a few months ago. Anyway, it’s nice to hear that my theories are approved around here! (and sorry for my equally late answer, but I’ve been busy doing some school work).

The only way I’ve been able to judge the time period for a lot of Spaghetti Westerns (unless they take place during the Civil War or outright say) is through my amateur knowledge of guns.
Generally, if they use cartridge loading guns like the colt .45 (pictured below) I figure they probably take place sometime after 1871. If they have powder ball revolvers (like the ones used in The Good, the Bad, and the Ugly) they take place before. Of course, historical accuracy isn’t high on most Spaghetti Westerns’ priority list, particularly for firearms so the method isn’t perfect. 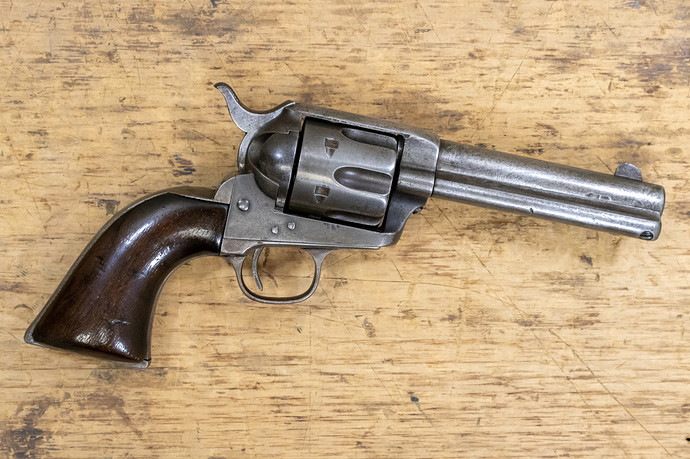 That’s a good way to tell. I also have an amateur-ish knowledge of guns, but it seems that guns evolved like clothes way back when.

Historical fashion is another thing I’d like to learn more about but seem to be less info on it, sadly. Much like out of date clothing, though, I don’t mind historical inaccuracy if it serves the film better.