After having watched Fünf Klumpen Gold, I was curious about other films directed by Sergio Grieco, thinking maybe Westerns just weren’t his thing. Checking his filmography on IMDb.com made me choose Come rubare la corona d’Inghilterra, literally “How to Steal the Crown of England,” a somewhat blasphemous title. The film’s hero is a stunning superhero, enigmatically named Argoman (don’t ask, he’s not very fast or swift and surely not one of Jason’s seafaring companions, though he does have a predilection for beautiful women on seagoing vessels). The amazing Argoman’s fantastic foe Jenabell (Dominique Boschero) strives for world domination, nothing less. To rule the world as “regina del mondo” is her astonishing aim, antagonized by Argoman (Roger Browne) and his set of stupendous superpowers, among them the uncanny ability to leap from a stationary box lorry in a single bound (as depicted in Figures 1.1, 1.2 and 1.3). 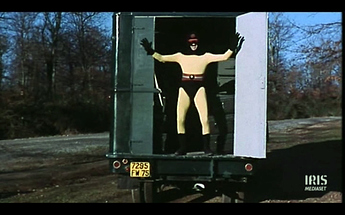 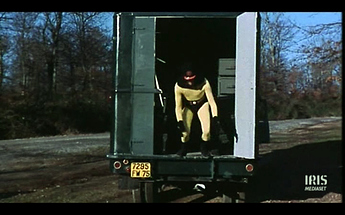 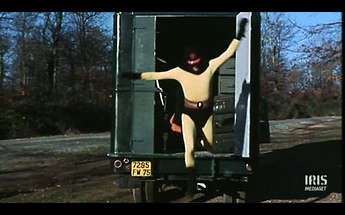 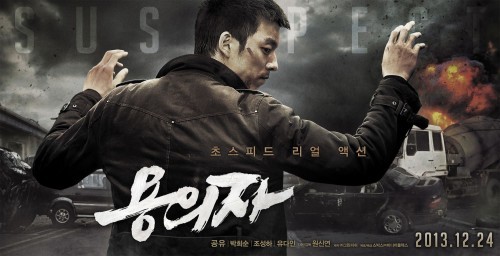 A Korean thriller,‭ ‬very successful at home‭ (‬more than‭ ‬4‭ ‬million admissions‭)‬.‭ ‬Don’t expect anything like _A Bittersweet Life_‭ (‬2005‭) ‬or The Man from Nowhere‭ (‬2010‭)‬:‭ ‬this is not an arthouse action movie in the style of Scorscese or Soderbergh,‭ ‬but rather a South-East Asian answer to Jason Bourne.‭ ‬The protagonist is a former North-Korean ace spy on the run: he defected after he was betrayed during a mission and his wife and child were killed.‭ ‬In South-Korea he has become a driver for a prominent businessman,‭ ‬but when his new boss is murdered he becomes the main suspect.‭ The film offers some of the most spectacular car chases and close combat scenes in recent memory,‭ ‬but you’ll wish it were a bit more straightforward. 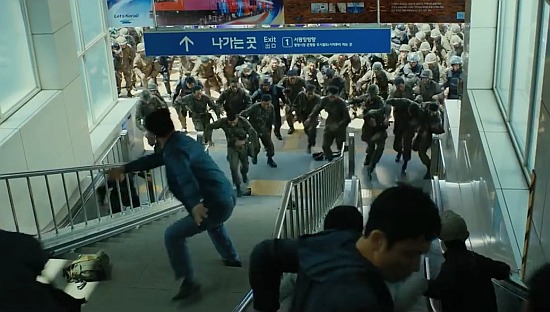 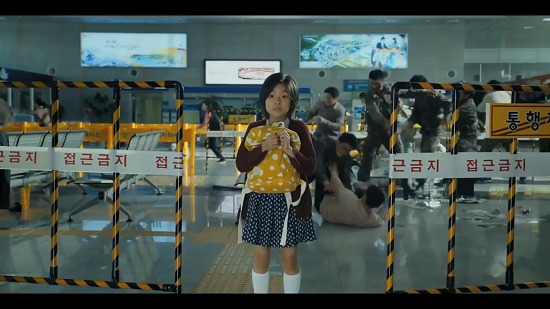 I saw it last week, very good zombie movie. Kodi didn’t have it with english subtitles had to download from a torrent site. There’s already rumors that Hollywood wants to make a remake, which doesn’t surprise me.

A Giallo, made some ten years after the glory days of the genre (a twilight giallo, so to speak), directed by Lamberto Bava, son of Mario, who calls himself John Old jr. (!) for the occasion (in honour - I guess - to his old man. The film tells the story of a murder spree similar to the one of a serial killer who was arrested fifteen years ago. The man subsequently died in a fire, but one of the potential victims, the female psychiatrist who interviewed him after the arrest, keeps seeing his face in mirrors, shop windows, etc. Are these faces only a reflection of her own fears or has the killer risen from the grave?

Midnight Killer has all the ingredients of a genuine Giallo (beautiful women, black gloves, knives, etc.) but it was made for TV, therefore the slayings are not as graphic as in most classic genre examples. The film is set in Ascoli Piceno, Marche and excellent use has been made of the geographical and architectural characteristics of the town (it’s a seaside resort and also has a famous historical centre built in marble). Some of the visuals are inspired by Kubricks’s The Shining (1980), others by Brian De Palma’s Body Double (1984) (and one scene by Hitchcock’s Psycho). This is not a bad homage from the son to the work of his father (and a couple of other illustrious names) but the conclusion is pretty laughable. Gialli were never meant to be believable …

Aka: You’ll Die at Midnight (a translation of the original Italian title)

Film is available on You Tube, in Italian, with English subtitles:

In that case John Old Jr. most certainly was chosen in honor of the old man. It remains a very odd pseudonym, in my eyes even more ridiculous than some of Fidani’s pseudos, like for instance Dick Spitfire (that doesn’t sound like a real name, and is also quite odd, but has at least a certain ‘inventive’ feel; John Old is plain stupid)

Bava’s other English pseudonym wasn’t much better, maybe even worse, John Foam (the translation of his surname; it also means “dribble,” “slobber,” “breath”).

Bava’s other English pseudonym wasn’t much better, maybe even worse, John Foam (the translation of his surname; it also means “dribble,” “slobber,” “breath”).

I’ve never said it before, but this is the moment:

I continued my journey through French cinema with a rewatch of this thriller. I wasn’t impressed when I first watched it but wanted to see it again to check if it hadn’t improved with age. Can’t say it had, or just a little. But there’s a guest appearance by the great Serge Gainsbourg (there’s a link in the article to the film clip) 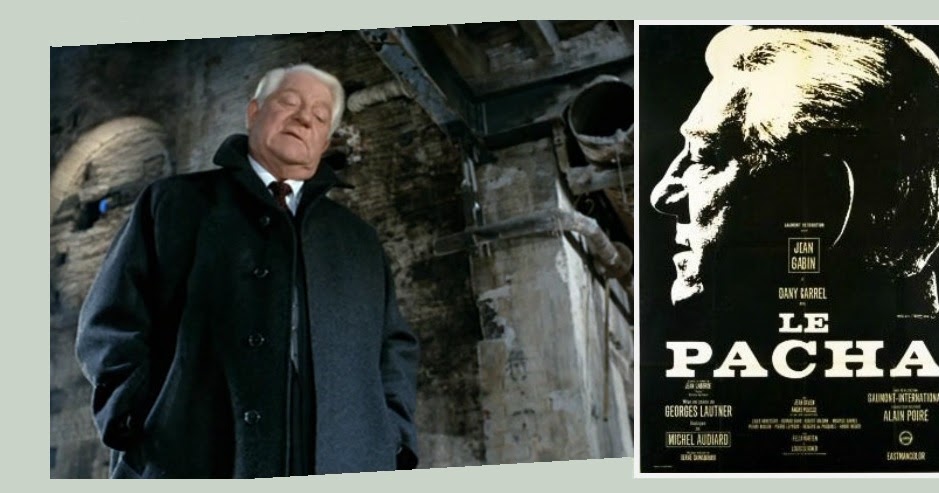 I would love to post in this topic more often, but honestly I mostly forget.

For those of you using Letterboxed, I can be found and followed there, for example.

Last movie I saw: LA ISLA MINIMA, a kind of True Detective-esque Spanish crime flick that takes place in the fall of 1980 in the south of Spain, a depressing kind of crime flick that deals both in culture, Spain’s painful history and the beautiful but kind of melancholic geography… a great film though. Called Marshlands internationally, catch if it you can.

I read some interesting things about LA ISLA MINIMA, but it won’t be shown in any theatre nearby.

already out on Blu

I wrote this about it a while ago:

A stylish, very stylish thriller, set in Spain’s rural South, in 1980, that is: the immediate aftermath of Francoist Spain. In fact society is still dominated by memories of a period that is supposed to have ended, but is not yet history.

Two homocide inspectors are sent to Andalucia to investigate the dissappearance of two young peasant girls. It soon transpires that more girls have dissapeared in the recent past: they were all found dead after a couple of days, their bodies mutilated and dismembered. The main suspect is a local pimp and Casanova, the kind of guy all the girls fall for. Is he a serial killer or is he only a small cog in a much larger operation? Unfortunately the locals aren’t willing to communicate with the detectives, the more so because the older of the two is recognized as a former Francoist by a local journalist and a woman who’s supposed to have second sight …

The movie won no less than ten Goyas (Spanish Oscars) and was received remarkably well abroad. It holds a 90% approval on Rotten tomatoes. But still … As said it is stylish, in fact it’s so stylish and good-looking that you’d almost forgive its flaws. Some things are hinted at but not explained, but that is not really the problem (in post-Franco Spain many things remained unsaid), but a subplot about drugs goes nowhere and the movie also tends to betray its own premise, creating false expectations. In the end it’s a sociopolitical study rather than a thriller, and the tension that was built up in the course of the movie, seems to evaporate during the ambiguous finale.

However the coda, which offers a not completely unexpected, but still meaningful revelation, is both bitter and tragic (and makes you think).

When I had originally seen the trailer for this movie, I thought it was one of those fake, joke trailers. But they actually filmed this. Not that I’m surprised, I’ve already seen Machete, Hell Ride and few more of those postmodern in-joke fan tributes. But whenever I see one of those, it only adds to my impression that there is only one Quentin and someone should say to him that he doesn’t have to help every friend of his to make a movie. RZA the director could pass under ‘OK for an amateur’, RZA the non-actor is not even funny, but the thing that annoys me the most with these type of movies is that they are actually mainstream, big-budget productions, so they inherently loose all the charms of the amateurish B-movies that they try to emulate.

I don’t have much mileage in Jess Franco’s filmography, but I decided to give this one a try. I was mostly bored, even by the pretty explicit nude scenes. Some scenes were slightly disturbing (I bet they were a lot more disturbing back in the day, than there are now), but the most positive thing I can say about this movie is the use of location. It really made the architecture of one those typical Mediterranean tourist complexes from the 60s/70s, full of concrete and futuristic shapes, look weird and uneasy.

French gangster movie set in the capital of French crime, Marseilles, can been seen as answer to both Bonnie and Clyde and The Godfather. Its prequel was filmed 4 years earlier and it all-stared Belmondo and Delon. In the sequel, Belmondo is only seen at the start as a picture on the cross. He’s been murdered and his friend Delon is revenge-bound. I’ve read a comment that it is similar in structure to spaghetti westerns. It may have a point: background theme is that of change of times, new kind of organized crime is pushing out the old-school guys, while out front we have a tale of bloody revenge and anti-hero which is tough but can be hurt. Very noir in its sympathy for gangsters and with very graphic violence for its time. 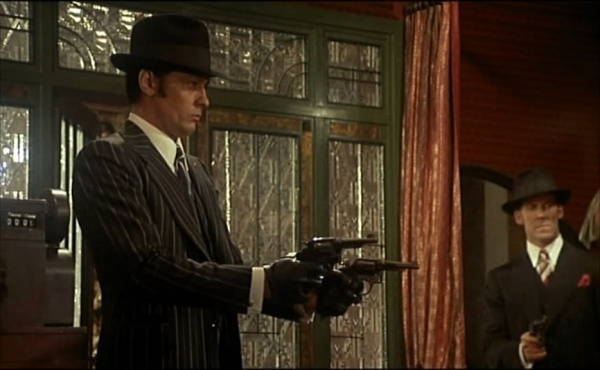 Lately I’ve been watching a bunch of ‘EROTIC/SEX’ films, some i had seen before and some i didn’t. So far i have these as my top ten, but that will probably change as i have others to watch.