I expected nothing less than a decent job for the first Sartana movie. Honestly I’m sure it was next to impossible to locate a print that had minimal wear. Also is it the same print used for the German blu ray?

Regardless of the Arrow prints not being perfect, I can now start using my VideoAsia bootleg set as a frisbee.

I’m gunna microwave mine. It’s such a waste of space.

For those who want to chip in, I started reviewing disc one, you can see what I managed to type up today if you click on the link. You’ll notice a few placeholders, so there’s a bit more homework for me for tomorrow evening. Feel free to use this as a template or deviate from it a bit. Important to go into the quality and extras and, we should probably do mini reviews and link to full length reviews of the films where we have them.

Since nobody has claimed a film yet, I’m calling dibs on Have a Nice Funeral.

I’m gunna microwave mine. It’s such a waste of space.

I’m gonna throw mine into the Grand Canyon.

is it the same print used for the German blu ray?

The German one was a 4K scan, Arrow’s is an exclusive 2K scan.

I will listen into the audio commentary. I dont have the German Blu yet…

Judging by screenshots I gotta say the German print looks pretty damn good. Would love to see a proper comparison.

Ok my fellow co-authors, I am done with my little chapter, feel free to top up the article. Man, that audio commentary by @mike_siegel is really great (as per usual)

I am getting sick of the misuse of “Complete” these days. Great Sartana box set but only five films. Thomas Weisser’s Spaghetti Westerns: The Good, The Bad And The Violent has a list of 17 films with Sartana as a character. I got caught with Django as well. I bought The Django Collection Volumes 1 & 2 (12 films) only for Thomas Weisser’s book to tell me there are 32 films featuring Django. I have got at least half a dozen box sets with films on I’ve got just to get a couple I haven’t got. Does anybody else get caught like this? The twin films from Wild East Productions are a pain as well. There are eight I want but they share the bill with one I’ve got and through Amazon to New Zealand they are over $35NZD each.

Well, there’s only two official Django films and Arrow’s box set is the complete collection of official Sartanas. It would be nice if they released the unofficial films in a separate box set but I see no reason why they have to include something like Trinity and Sartana with Garko’s films.

Not really the subject, but you mention Thomas Weisser’s book as reference. That book is a endless source of misinformation. There’s a thread in here somewhere all about it.

Spaghetti Westerns: The Good, the Bad and the Violent (Thomas Weisser) Books & Resources

Tom Weisser simply seems to have been thinking that if he can get away with stuff like that, why not? Why bother? I guess he was cynically aware of the lack of spaghetti western information (in America at least), and along with spreading real information he actually exploited the genre’s unknown status. Or at least used it as an excuse for not doing his homework (checking facts, naming sources, actually watching the movies, etc). Selling more Video Search of Miami tapes seems to have be the bo…

If Sartana was a creation of Parolini, there is only one official Sartana film.

And why should Django 2 be more “official” than let’s say Preparati la bara? Which was produced by those who also produced the one by Corbucci, and featured some more stuff members from the first film, notably writer Rossetti and photographer Barboni. And I think the film was written for Nero, who preferred instead to act in the more prestigious Camelot.

I think this debate doesn’t lead anywhere. Mostly, what gets released is decided by the question of what licenses and material can be acquired 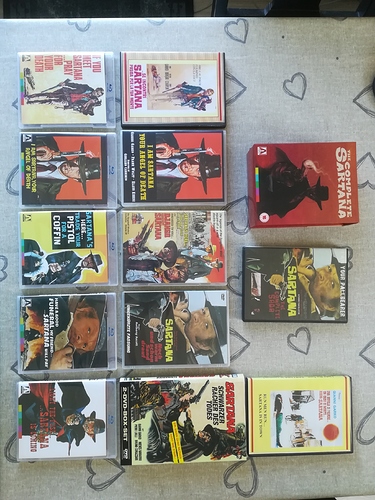 A couple of years in the making, but it’s finally completed.

I suppose if Arrow’s box set started with $1,000 on the Black, it’d be misleading for new viewers since Garko isn’t playing the same character.

Oh yeah, and they’re selling complete Star Wars saga at amazon and that collection doesn’t have Turkish Star Wars. What a rip-off!

I also watched the interview with Parolini, I think aged 94 he seems a mix of senile and crazy!

He made me think of grandpa Simpson at times.

Having just received my collection, I really am enjoying it far more than I thought I would. Considering my exposure to Sartana only came around February earlier this year, I think I’ve taken a huge liking to the character, as well as Gianni Garko, whom at first I had some difficulty imagining him in a Colonel Mortimer-type of a role, which he isn’t, other than donning a similar attire.

Anyways, I think this is a franchise worth celebrating. The sum of money paid for this box set is worth every penny, in my opinion.

You know what keeps fascinating me? For a film series that’s perhaps considered a B-Movie here in Northern America, it exudes cool, originality and creativity a hundred times more than a super A-List movie made on a $300 million budget made today. This comes from someone who has seen his fair share of movies on his journey to becoming a cinephile. I can’t help but love how witty the turnouts are in the Sartana films. Makes you wonder how unoriginal we are starting to become we can’t even try to outdo the charismatic astuteness of a film made five decades ago.

so where is everyone who wanted to co-write that review