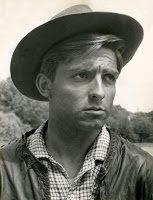 José ‘Pepe’ Sancho died on March 3rd from cancer in Valencia, Spain. He was 68. Sancho, who was from Manises (Valencia) and shot to fame in his role as “The Student” in the TV series of ‘Curro Jiménez’ and had a long career in film and theater. He had recently starred in and directed the play ‘The Don Friolera Horns’. On television, specifically in TVE he is remembered for his role in the series ‘Don Pablo Tell’. Sancho appeared in six Euro-westerns from Massacre at Fort Grant" (1964) to “Vengeance of Pancho Villa” (1967). He made a guest appearance on the TV series “Queen of Swords” as Don Rafael Alvarado whose death starts the adventures of his daughter Tessa Alvarado played by Tessie Santiago as a female Zorro figure. Sancho was also a voice actor and was the Spanish voice of Mario Adorf in the 1963 Euro-western “Apache Fury”.