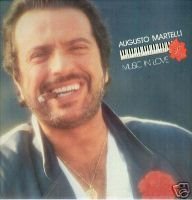 Italian composer, musician, singer Augusto Martelli died today in Rome. He was 74. Martelli is probably best remembered for the song Djamballà, the main theme song of the 1971 film Il dio serpent. He composed the scores for two Euro-westerns: “Another Dollar for the MacGregors” with Peter Lee Lawrence and “Ballad of Death Valley” with William Berger and Wayde Preston. Both were made in 1970 and Martelli sang the main theme songs for both films.