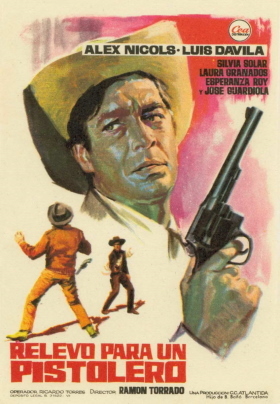 A stranger from Boston offers a notorious Arizona outlaw a job he can’t refuse.

Have someone seen this rarity ? I know, that there is a spanish vhs from divisa, I’ve seen screenshots in the french western-maniac-forum !
I’m a big fan of Luis Davila, so i’m very interested in that film !

Viewed this one last night. A young man enters town and sets up a business and all goes well. That is until he goes for a drink one night at the saloon and comes into conflict with local bad guy. He was warned off this by his friend played by Alex Nicol. Nicol plays a former gunman who no longer uses a gun. Anyway Nicol teaches his friend how to use a gun fast, with a few interesting mdifications. Its after this point I thought the story became a little less routine in this early entry, probably looks a little earlier than it is as filmed in Black and White. This one was easy to enjoy for me as like Alex Nicol.

Listed as a euro western in the database so maybe someone could transfer this thread to the Eurowestern and Hybrids section…thanks.

Listed as a euro western in the database so maybe someone could transfer this thread to the Eurowestern and Hybrids section…thanks.

Never heard of this one before, think I’ll go looking for a copy, sounds … well, interesting