Hi Runner… I came across this Website… Nightmare looking at it. I,ve just started looking at Colmenar vieja line/area… This site appears to have list of stations around that area but some or many now gone/stations in ruins… When you have time look at todays vias/lines and try to find any clues from Colmenar… Nightmares lol. https://miestacion.es/linea/423/C4b_Parla__Atocha-Sol-Chamartin__Cantoblanco__Colmenar_Viejo.html

I believe I have googletravelled along that line before, but why not once again just to make sure

No I couldn’t find anything interesting there. In general there are no appropriate background hills and was probably too many buildings etc near Madrid. The Colmenar Viejo train station seems to be the least unsuitable candidate that I have seen fairly near Madrid but it do not match in several aspects.

If ESPERANZA exists one thinks that it would appear on some of the tens of thousands of photos of ferrocarril on several different Facebook web sites that I follow nowadays, not just from Andalucia, but no luck so far.

My way of tackling this is usually that one photo of maybe several hundreds looks interesting enough to examine closer on Google Maps. So far probably hundreds of ESPERANZA possible candidates have been ruled out…

Here a little to the left is another correctly configurated telegraph pole (4 x 2 vertical) in Alcoy, Alicante. So there are at least 3 locations with such telegraph poles in the south east of Spain with the other 2 in Murcia. I estimate/guess by my experience that less than in the order 1 of 100 photos with telegraph poles at stations is correctly configurated thats is as at ESPERANZA. Therefore these 3 examples might be a little hint or even clue in what direction we should look for ESPERANZA. 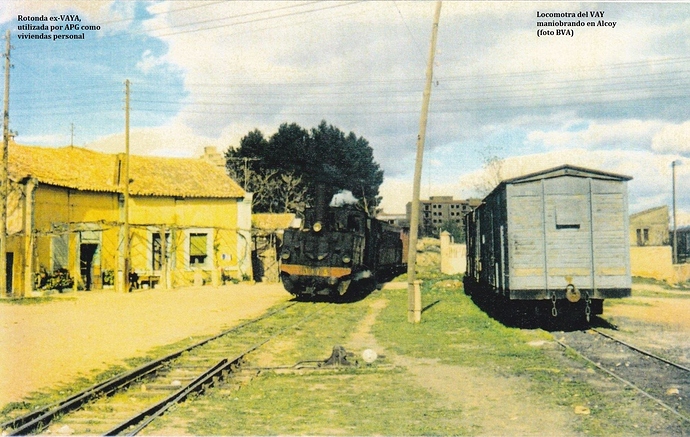 I,m the same as yourself and keep studying the 100,s of photos that appear on facebook Ferrocarril… once in a while( not very often) you think yeeeeeeee similarities then back to earth.

. Nothing from here and no replies from what started off as promising contacts but we are in Lockdown still in GRANADA . Up and onwards lol

It is convinient that some via verdes have Google street view, for instance along parts of the abandonded Gandia - Alcoy line. I think the vegetation is slightly promising thereabouts and in a few angles the hills are OK, but mostly not. It would be thrilling if you could find the ESPERANZA location on a via verde in Andalucia or nearby (Murcia, Valencia).

The search goes on… Maybe after lockdown we have a break through lol. ( In our dreams).
Its a pity we don,t have more numbers on the case… It rules more things in or out… Cheers for now

Just after we had visited Luque I Google-viewed the Moriles-Horcajo station also along El Tren de Aceite and at the edge of the pueblo Navas del Selpillar, and it seems to have decent background hills and fine green undulating cultivated ground on the corresponding “ESPERANZA station building side” without disturbing mountains.

Interesting is also that on GoogleMaps it appears that it could have been a double railway track even if the photo from 1984 only shows one track but that was just after the railway was closed and I have noticed elsewhere that an old double track sometimes is reduced to a single track.

Unfortunately the 1984 photo shows telegraph poles on the wrong side of the railway and with singleside configuration so they must be newer than 1966 to be at the real ESPERANZA location. Also it is unclear if there is a visible green hill at the corresponding “opposite” side of ESPERANZA station building" in correct angle.
Anyhow the background distant hills look promising on the photo and maybe the hill seen to the left of the house (which exists on google) on the photo could be the sought after green hill not so far away.

It’s a pity we didn’t visit the location when we were in the neighbourhood last autumn ! 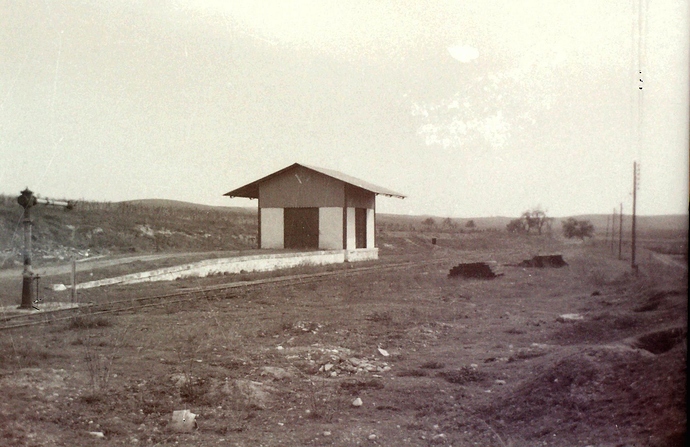 This photo contradicts the Google view of a possible double railway track in the direction of the corresponding “arriving train at ESPERANZA including the curve”. 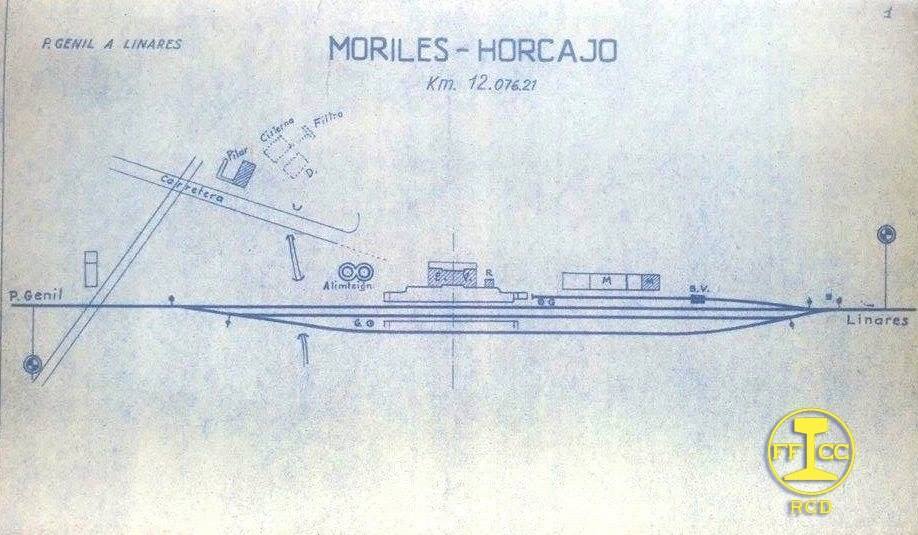 Here a little to the left is another correctly configurated telegraph pole (4 x 2 vertical) in Alcoy, Alicante. 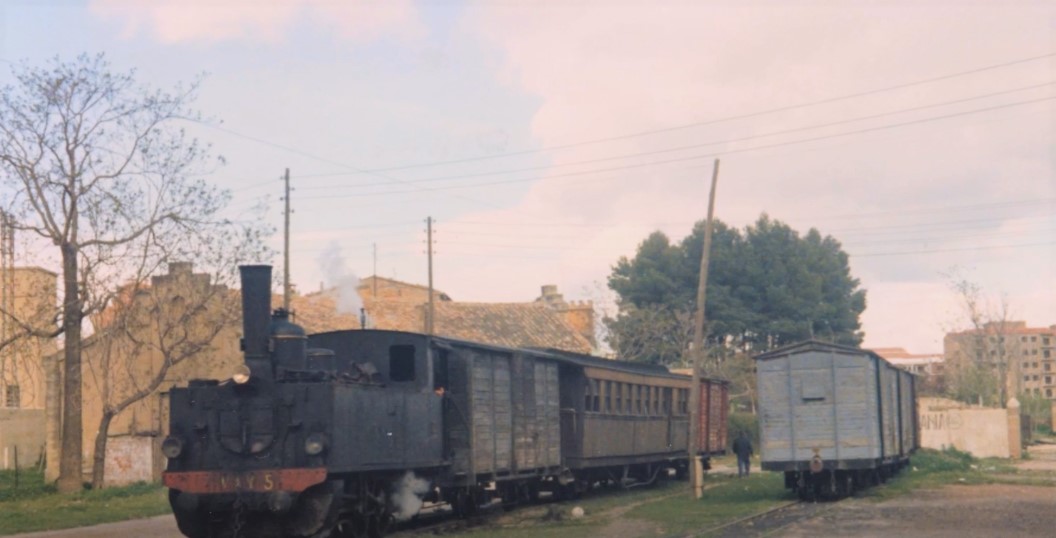 No I hadn’t seen it, or not remembered. I searched now for FUENTELCESPED on Facebook and only found a couple of photos, for example one on the site i have watched most time lately which is Marcha A La Vista which seems to have 10 times more photos (than El Ferrocarril en Andalucia) from probably all of Spain and there I just now watched a photo of the station. Honestly I found not so much interesting there since the angle was not perfect but neither at Googlemaps regarding tracks configuration.

But the hunt continues

Your the expert on Google maps Amigo… Think lucky just like the Gypsy and be lucky lol.Upwards and onwards lol. Take care

I try to call the real location experts for help :

About two weeks ago I started to wonder and trying to remember the name of a disappeared short road near my home around 1970’s. But it was lost in my memory. After that I started carefully studying hundreds of files of property sales in that village that covered the 1910’s and 1920’s (compare with thousands of photos of hundreds of southern Spain railway stations). Interestingly I found 25 roads there that had changed names or in a few cases even disappeared. I also come to learn the ancient names of dozens of the blocks and was eager to solve the block-road puzzle which I did to over 90 %.
Unfortunately all this obtained knoweldge didn’t lead to the mystery name of the little road in question but I understood that it was not constructed until 1930’s or even later.

But yesterday I got an answer a village employee (mail question sent around 2 weeks ago). He mailed an internal village property street map from 1979 which finally solved that mystery.

My conclusion or hint is that actively contacting the Navajo Joe production companies (or remains of them regarding company files etc) may with some luck be a more efficient way to find the ESPERANZA location even if in our case the surrounding nature, topography and/or railway tracks hopefully should be out there somewhere and not completely disappeared thus providing another way to solve the mystery albeit so far in vain.