While we are still knee-deep in “SWDB 3.0” (and will be for at least a few more months, as there’s just a few hands helping out with this), we have already started a few other projects to make the SWDb better, one being the Cataloguing Featurettes endeavor, and the other is what @IllThinkAboutIt has kicked off: making locations info better.

Before we go totally wild with this. I realize this could have some far reaching consequences and I want to get it as right as possible so location info gets usable and also easy to maintain. So I want to discuss this first, while Michael is playing around adding some pictures to the location info.
Some thoughts:

So what are everyone’s thoughts on this? What would people’s needs be when it comes to location info? How could we go about this?

Not sure if this is viable information or not.
But as far as I understand one can create custom google maps. 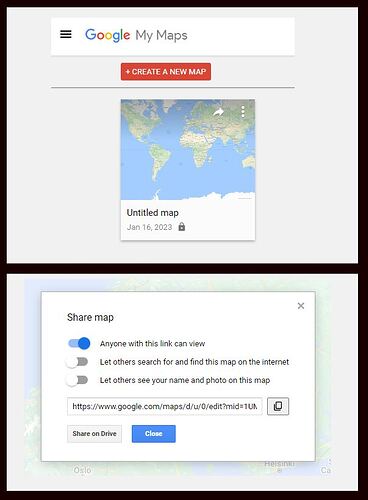 Let’s say you as Admin have a professional Gmail linked to this webpage.
Theoretically you could use that to create a google map that can be shared online.
One should theoretically also be able to invite people to edit said map.
That way anyone who would like to go location hunting could just use that map link and have all the locations ready.

What I found highly helpful about google maps when going location hunting,
was the fact that you can put out Latitude and Longitude location spots.
For example: the opening shot in “For a Few Dollars More” is not an actual “google location” but one can still put out the coordinates as a pinned place. 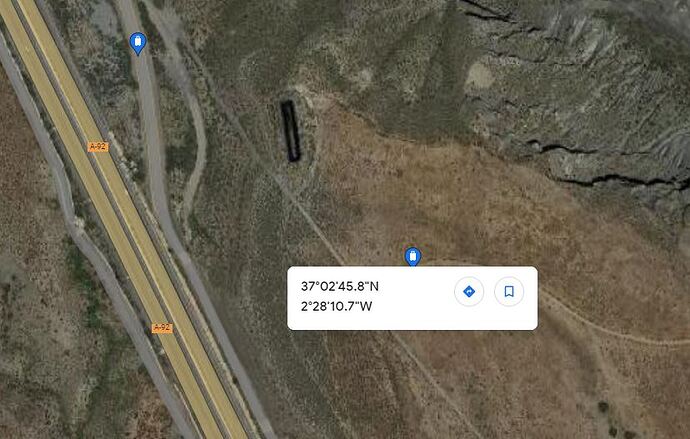 (Just an idea! not sure if it would actually work in practice^^)

Other than that I would have loved to have more granulated descriptions on locations in map format before I went.
Kinda like this: 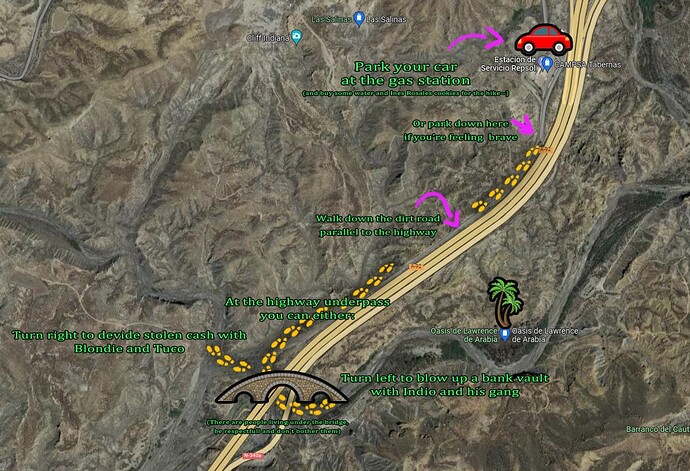 (If this is something of interest that SWDB would like to provide I can help out with it.
But with less jarring and terrible art of course xD)

But yeah, great initiative! and holler if you need any art

@NeedleFork … just wondering if you have posted any photos from your recent trip?

Not yet! Between me and my dad we took over 2k photos :'3
I need to go through them properly and organize, because no one wants to see all 2000 of them xD

If there’s a way you could upload them to an online album for us to browse though that’d be cool. I’d love to see em

Yeah, for sure. I’d love to go someday too, not sure that I will though :’/ Maybe if something was organized on here…

Maybe if something was organized on here

I’ve thought about that too ^^ could be fun to travel to, say Almería, and have a bunch of us meet up there.
It seems like many of us who have been there really wouldn’t mind going back.
And it’s one of those places you want to visit with other people who also enjoy the films.
(Otherwise you’re just kind of making ppl stare at mountains and dilapidated buildings for no reason

I’m as much of an introvert as one can be.
A fact I’ve had to come to terms with, is that all humans (unfortunately myself included :'3) do better amongst others, even if its just a little or sometimes.
Connections with others makes us happier, both mentally and physically.
I enjoy all of you here, talking about old films ^^ But I’m sure if we met for an adventure in Tabernas, it could enrich my life beyond that.

So who knows! maybe one day we could organize something together ^^
I bring nothing to the table though xD someone’s gonna have to know how to drive!

That resonates with me more than you would believe. And the driving part also applies to me. Its definitely a nice idea, and something maybe to consider for the future, could be tricky to pull off depending on how many would be interested ect…

I’m sure if we met for an adventure in Tabernas, it could enrich my life beyond that.

Just think of the punch ups we could have, arguing over the top 20 Spaghettis ! LOL

I have thought the same about meeting up for a locations trip - would be fun to do.
Some advise on the photos, maybe add a location to the file name before you forget where the photos were taken🤠

We just need Tim League to organise another Alamo Drafthouse Rolling Roadshow to give us all the oomph to make it happen again.

A few of us here did it back in 2008 and it was a fabulous experience. You can read about it and see our flickr albums of the trip from here: Rolling Roadshow Leone Edition Coverage - The Spaghetti Western Database

arguing over the top 20 Spaghettis

No need to argue at all, Its clearly every single film with Lee Van Cleef in it

That looked amazing! thank you for sharing!

That looked amazing! thank you for sharing!

It was a great trip. Location hunting in the daytime, watching Leone films in situ in the evenings and drinking beer with fellow fans into the night. I made some friends that weekend from all over the world and still in touch with most.

I also managed to pull rank (based solely on age) on our beloved @Admin so he had to sleep on the rollaway bed in our triple room in Los Albaricoques. He was a mere slip of a lad back then and accepted his fate stoically.

I remember none of this and can neither confirm nor deny. I think they filled me with enough Spanish cerveza to forget my misery

Anyone else from that trip still active besides you and Seb? It must have been fun, looks like a great time. You think the organizers of the film showings would host anything like that again? I know it was a long time ago.

Just me and Seb really. Although occasionally the others surprise us with a visit. I’m in touch with them all still though.

We all only met for the first time at the airport but became a pretty tight crew very quickly.

How many people from the site went?

There were 5 of us from the forum