[quote=“scherpschutter, post:8, topic:2772”]A good scene, yes, but I thought this ‘alternative Russian Roulette scene’ was even better. Makes you clear that there’s something wrong with this Murphy fellow.[/quote]ah yes! agreed a good scene. forgot about that. wonder if Michael Cimono saw this before he did the " Deer Hunter"?

ah yes! agreed a good scene. forgot about that. wonder if Michael Cimono saw this before he did the " Deer Hunter"?

Don’t think so, but if he did, those scenes in The Deer Hunter weren’t bad either …

Anyone know where I can find a full uncut version of this? I’ve only seen the 76 minute one on youtube.

77 minutes is the correct runtime for this one.

… even though a bullet proof vest might have been more practical

Always seems cut this one as such a short running time.

77 minutes is the correct runtime for this one.

Does the German Blu have English audio?

According to Amazon.de, yes. I don’t have the BD, but I guess it’s identical to the DVD.

I’ll get it then, thanks!

I don’t have the BD, but I guess it’s identical to the DVD

I have the BD, it’s the same as the DVD. Enjoyable western for me, but the english dubbing was kinda bothersome.

Just ordered the blu ray from Amazon Germany - I found conflicting language info from a Koch Media website, SWDB and Amazon.de but as you say above the German site has English on both the dvd and blu ray.

Watched this tonight and enjoyed it a lot even though the acting is pretty bad. It’s an odd mix since it’s quite dark but there’s many parts that feel like The Waltons or a Lassie film. The Koch release is very good and I’ll definitely be giving it another watch.

Debris from an ambitious but abortive attempt to write something readable about Ocaso de un pistolero:

Evidently, Ocaso de un pistolero’s German dubbing editors set little store by their germanophone audience’s proficiency in elliptical comprehension skills and thus deemed it due to the prospective viewer’s unimpeded entertainment to inform him or her via voice-over at the beginning of the credits sequence that “Dan Murphy lebte, aber sein Sohn war tot. Dafür rächte er sich an Sheriff Rogers. Er kidnappte dessen Sohn und floh in einen anderen Bundesstaat.” (“Dan Murphy lived, but his son was dead. For that, he took revenge on Sheriff Rogers. He kidnapped the sheriff’s son and fled to another state.”) The Spanish and English dubbing editors, on the other hand, placed more confidence in their respective countries’ cinemagoers’ grasp of elliptical storytelling techniques and let them puzzle out for themselves the film’s confusing exposition.

In its pre-credits sequence, Ocaso de un pistolero (“decline of a gunman”) introduces a revenge motive: Arriving with his wife and baby-son in a small desert town, ex-gunfighter Dan Murphy (Craig [credits: Graig] Hill), retired but still wanted by the law, is recognized by the local sheriff’s deputy, a man named Mack (Raf Baldassarre). During the ensuing brief encounter, Sheriff Rogers (Jesús Puente) accidentally shoots Murphy’s son. Terrified, Murphy and his wife, Miriam (Gloria Milland [Mara Fiè]), flee town in their covered wagon. If the film conformed to conventional narrative patterns, it would now tell of Murphy’s taking revenge on Sheriff Rogers. But it doesn’t.

After the credits, Dan Murphy awakes with a start from a nightmare. Or is he dreaming that he has been dreaming? The credits sequence itself certainly has an oneiric quality to it, accentuated by its slow-motion images’ pale-purple hue. A couple – assumedly Mr. and Mrs. Murphy – in a covered wagon, drawn by four horses at full gallop, being pursued by a bunch of riders who never catch up. What follows is in any case too weird to be taken as an attempt to tell a “realistic” Western story.

The film’s strange narrative omissions – most importantly Andy’s kidnapping – and its story’s aimless meandering make it tempting to view everything that happens after the pre-credits sequence as the traumatic delirium of a father trying to cope with the death of his baby-son. Consider, for example, the film’s lengthy depiction of Margaret and Pat’s marriage, irrelevant to Murphy’s revenge story. The couple (Conchita Núñez and Carlos Romero Marchent), with their German Shepherd Custer (Sultán), might represent Murphy’s wishful projection of a happy life he will never have. Of course, Margaret, Pat, Custer and Margaret’s father, Alex Dixon, the saloon-keeper (Paco [Francisco] Sanz), are brutally killed by the Castle brothers (German dubbed version: Carter-Brüder, don’t ask), who suspect that gunslinger Murphy has assumed a new identity under the name of Richard Markey. The Castle bros’ behavior is nothing but irrational right from the beginning. They are
evil and mean but, surprisingly, don’t pursue materialistic goals (land, property, money), rather carnal desires (projected onto Miriam Murphy and Margaret Dixon).

The Cartwrights from hell: Ben-Johnny (José Guardiola [not to be confused with the singer of the same name]), Adam-Slim (Lorenzo Robledo), Hoss-Davy (Piero Lulli), Little-Joe-Charlie (Hugo Blanco)

Gee! Mine your own beeswax, buster! Sign painted by the winner of the Grand Ole Hicksville Spelling Bee.

A: O. d. u. p. is an uneven, early effort by the Romero Marchent bros, Rafael (director), Joaquín Luis (screenwriter) and Carlos (actor). Its biggest problems: a direction lacking a screenplay and a screenplay lacking direction.

B: O. d. u. p. is a brilliant, early example of a surreal, dreamlike European Western, concerned with questions of identity, morality, trauma sequelae, atavistic behavior, fear of loss, and the fragility of interpersonal relationships. Its biggest assets: a direction lacking a screenplay and a screenplay lacking direction.

The credits sequence itself certainly has an oneiric quality to it, accentuated by its slow-motion images’ pale-purple hue

As you may know there is also a 3-minute title sequence in typical SW style (referred to by Bill in his post?), maybe released in Italian movie theaters already in 1965, that precedes the initial Murphy’s son scene. In this version the sequence that you mentioned has natural colours and, of course, no superimposed text.

What is certain is that there aren’t other differences between the two versions (Italian and Spanish). 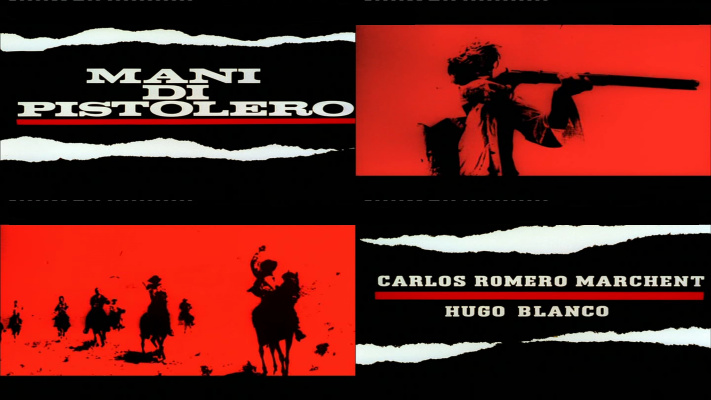 As you may know there is also a 3-minute title sequence in typical SW style […].

What is certain is that there aren’t other differences between the two versions (Italian and Spanish).

Too bad. The film does feel truncated.

The film does feel truncated.

I didn’t get that impression, in my opinion the main problem is that the film revolves around a totally improbable situation. In addition, the opening scene is not very inspired and the first thirty-five minutes are just so-so.

On the other hand the feud (sort of) with the Castle brothers is great for an early Spagh, and the concluding part with psychological implications maintains a fairly good level.

My favourite part starts from here 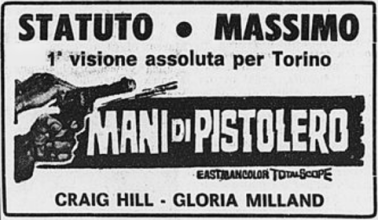 Do you know where the information that the film runs for 100 minutes comes from? Should we change the runtime to 77 minutes in the database?

Should we change the runtime to 77 minutes in the database?

I would say so. The German page on Wikipedia, last edited three years ago, shows the correct running time of both versions.

Do you know where the information that the film runs for 100 minutes comes from?

From some book, I presume, or maybe from the old, not very reliable Anica website. But if anyone is aware of the existence of an extended cut please let us know.

Yes, maybe someone here on the forum knows of a longer version of this movie. However, it seems unlikely to me that more than 20 minutes are missing.

An overview of the runtimes: 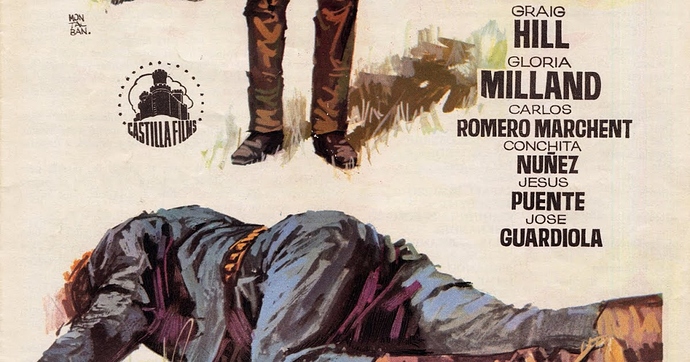