Lahola: [Duel at Sundown][1] (1965)
-Better than most of those early eurowesterns which were still copying american westerns. Film has Terence Hill in small part, actually in the beginning you’d think he’s the lead but he disappears from the film soon only to return in last minutes. He also plays a role of villain and really annoying asshole which is weird as we’re used to see him as a likable hero. Peter van Eyck has the main role as Hill’s older brother who isn’t the regular gunfighter but different kind of western hero who has the nerves of steel and usually tries just to avoid gunfights by intimidating his enemies.
Film has biblical -Cain and Abel- undertone which is underlined few times with the role of bible reading sheriff. There’s also a interesting duel scene set at the church where priest stands between the fighters trying to stop them. Another interesting aspect in the film was Wolfgang Kieling’s Puck character, likable bandit whose type we’re used to see as a sidekicks and so but here the plot takes unexpected turn.
Film has its flaws of course, mainly it’s van Eyck who’s just too old for the role which is especially apparent in the scenes with Walter Barnes who is in the role of his father. Barnes was only 7 years older than van Eyck.

I saw german version with english subtitles, unfortunately the subs were created probably with google translator because very often they were uncomprehensible. But they helped me to follow the film through anyway.

Saw the same copy as Bill above. This low-budget Sauerkraut western was a complete (turkey) bore for me. Nothing much happens for long stretches - the few action scenes that there was fails to thrill and to make matters worse, the english subtitles didn’t make much sense. Peter van Eyck (imo) was wrong for the part, he looks completely uncomfortable in the lead and in some scenes he was having trouble mounting his horse and riding it. Don’t think i’ll attempt to watch this one again, if ever…

According to the Czech and the German Wikipedia, Leopold Lahola was born as Leopold Arje Friedman (Hebrew: Aryeh Lahola) on January 30, 1918, in Prešov, a city in eastern Slovakia, at that time still part of the Austro-Hungarian Empire, if not for much longer. After WW II, Lahola worked as a magazine editor and as a playwright in Czechoslovakia, then moved to Israel for a short period and finally to Germany, where he directed movies and wrote screenplays. He died on January 12, 1968, in Bratislava.

Apparently the italian version Sparate a vista su Killer Kid was re-edited version with some new footage released in 1975 after the success of Trinity films.

re-edited version with some new footage

That’s the rumor: in any case the first Italian version, with Terence credited as Mario Girotti, was released in the 1960s (in February '67, to be precise). 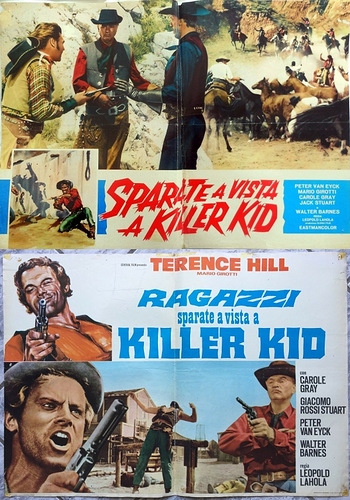