As Phil says, it really show Leone’s impact on the genre. Almost like a before & after for pastas. Amazing how the genre changes after Fistful.

This is what I was talking about girliewise …

I did notice Emmy Mae as well. Very US like SW.

Aw, Flipper is on.

Well, if you image google Vivi Bach, flipper sure is on (and some others off)

It took you 18 months to get hold of this movie Scherp?

It took you 18 months to get hold of this movie Scherp?

I knew there was an Italian release of it, but last time I was in Rome i diodn’t think of it and bought a few other DVDs. Then there was an interesting but rather expensive boxset called le Pistole non Discutone with several early spaghettis; I often thought of ordering it, but never did.

As Phil says, it really show Leone’s impact on the genre. Almost like a before & after for pastas. Amazing how the genre changes after Fistful.

and we can thank Leone’s viewing of Yojimbo for all that.

The first Italian western I ever saw. It was on TV when I was a child and it was good entertainment then, simply cause there was enough action.
Here comes a spoiler: A bit sad also because Horst Frank was my favourite character and he exits the film surprisingly early. Spoiler’s end

And I thought it was German western, like the Karl May ones, because of Horst Frank and Vivi Bach. And while it was somehow more similar to the German westerns than to the American ones.

Now too naive to be interesting, but I noticed Caiano’s eye for western images. He should have had a better story and script. Or more ambitions, as this is a main problem in nearly all of his SWs.

I re-watched this today and it’s definitely one of my top 10 spaghetti westerns even though it contains very little of the aspects that are common in the genre. Horst Frank is great as Billy and I continue to enjoy Rod Cameron as Pat Garrett. I plan on watching Bullets and the Flesh aka Il Piombo e la carne soon.

I actually enjoy this one. Not an outstanding film, that is for sure; but, I like it.

I actually enjoy this one. Not an outstanding film, that is for sure; but, I like it.

I am in agreement with you - it’s nothing outstanding but something about it makes me like it.

I remember this one from a Spanish TV broadcast and (shame on me) actually though it was an American made.
Read some quite interesting facts in here.

… which encouraged me to write a review in Portuguese: 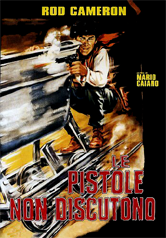 Just watched the Koch Media Release. IMO this was an OK movie not really bad but not really good either. I didn’t knew that Morricone made the music for this too. Funny his name in the German Opening credit is Emil Morik ;D.
The best role and the best actor was Horst Frank but they let him die too early. After his movie death the movie looses some quality. 8)
One of the better Pre- Leone Westerns but not as good as Gunfight at Red Sands.

This is one of my guilty pleasure SWs. Mostly because I really enjoy anything with Horst Frank and he gets one of his biggest parts here. The title music is also a classic Ennio Morricone ballad.

I reviewed the film from the Italian DVD a while ago - Le Pistole Non Discutonohttp://mondo-esoterica.net/Pistole%20non%20Discutono.html and there is a link to a review of the complete boxset of the same name which is worth picking up for the right price.

So this one was shot back to back with “Per un pugni di dollari”, couldn’t be more diferent type of films.
Anyway not a bad movie I enjoyed it, if you think too mutch about, it will look like an American Western out of place, but for a film without any SW “grinta” even if made in Almeria and with European Direction I guess it’s not a bad piece of work, in any case at least the story it’s nice and the action scenes are cool enought, not legendary or a must have, but good as a reminder how things were before Leone changed them forever.
3 out of 5

It’s really an OK movie. Pretty well made, the camerawork and the quality are very good.
Horst Frank is superb, unfortunately it’s not his own voice in the German dub. He had one of the greatest voices in German movie history.

Other thing that surprised me, was the image quality this for a film made in 1964 looked like it made by digital cameras at least my copy.

That’s also what I meant when I talked about quality. Some movies are top film quality. It just looks as good as the Leones image.

Well I’m not so much talking about the artistics merits of the images (wich I agree are very good) but more in technical terms of it, this was a film made in 1964, but in in my copy the definition it’s so good, that seems that it was made yesterday by an top budget HD camera, it must be a remastered copy or something to get sutch a good definition, it’s almost unreal when you’re used to those bad VHS copies (or worst) from some SW.
But in artistic terms the camerawork it’s very good, I think it’s almost a trademark of SW the great camerawork and photography.