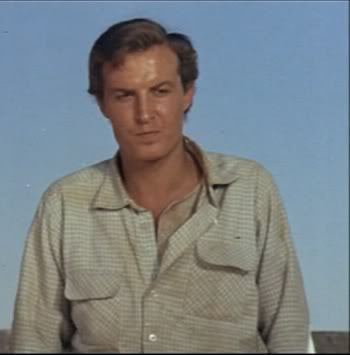 I’m confident that’s not Rossi Stuart, but I can’t put another name to the face.

Thank to both of you. I don’t think it’s Rossi-Stuart either. Some sources also erroneously list Lorenzo Robledo as being in the cast; he isn’t. And an uneven cast it is: I found the German actors playing the lawyer and the man with the whip pretty weak.

And that isn’t Robledo by any chance?

EDIT: It doesn’t look like it but maybe they had some sort of weird make-up!

EDIT: It doesn’t look like it but maybe they had some sort of weird make-up![/quote]

No, all the make up in the world can’t disguise Lorenzo’s distinctive face and that certainly ain’t him.

That’s not Giacomo Rossi-Stuart for sure. Jack Stewart has to be an alias used by someone else in the film. I have Jack Stewart playing the role of David if that helps.

Yes, that’s the David character, certainly, but it did not strike me as being Rossi-Stuart. Could he have been a German actor? Dunno. We’ll have to accept him as Jack Stewart for the time being, I guess. In the cast, for those who want data, Rafael Anglada pays the tavern owner and César Ojínaga plays Glenn at the opening (Ojínaga also dubs the Molino Rojo character but not himself!).

Anyway, thanks a lot to you all.

I had trouble with the cast of this film while writing my review
Robledo, listed by several people, isn’t in the movie. I wasn’t sure about this guy, but Giusti seems to have no doubt that he is Rossi-Stuart, so I finally accepted his decision.

Acording to this gallery, I’d also say it is Rossi-Stuart
(Could it be that this is RS, while in other cases someone else is called RS ? You never know with names and faces; in a completely different context I mixed up Elisabeth Loftus and Martha Nussbaum last night):

Well, I can see some minor similarities but for me that is not Giacomo.
I’ve just checked a few films in which he appeared around the same period as Pistoleros de Arizona and list the screenshots below as examples of how he looked then. In particular, check out the hair. I never saw GRS without that coiffure in anything. Film titles and year of release are marked beneath each screen shot. As usual I apologise for the diminutive size.

I have Pistoleros on DVDr but unfortunately it won’t play on my pc so can’t get screenshots from it. I’ll scip through it on my TV and see if I can spot Rossi Stuart.

I’ve just had a look thru my (very crappy quality) version on the PC and i couldn’t spot GRS anywhere in it.

I’ve just had a look thru my (very crappy quality) version on the PC and i couldn’t spot GRS anywhere in it.

You probably have the same crappy quality one that I do. In truth almost unwatchable in places but I skipped through it just now and I couldn’t see GRS either. One thing it confirmed for me though was that the guy who played David (the one posted in the pic from Nzoog definitely ain’t him. I tried to check the credits as they were rolling but to be honest the picture quality at that point made it impossible to read some of them.

As a side note, the film itself is not bad for an early Spanish type of Spaghetti. I’d quite like to get a look at a decent copy when one becomes available. The one I have does it no justice at all. Fernando Sancho in particular is in good form.

Edit: Nzoog is right about Robledo too. No sign of him either. Just goes to show it’s dangerous to put too much trust in imdb.

Edit: Nzoog is right about Robledo too. No sign of him either. Just goes to show it’s dangerous to put too much trust in imdb.

Yeah it does look like quite a decent film. And you caught me there…did forget to mention looking out for Lorenzo too, and nope, he was nowhere to be seen either.

I sent the rev a copy from an (excellent) CG torrent but I had problems with my burner lately and the copy I sent to him kept freezing, so he told me

I made a new copy, but want to check it first a-z (I have a holiday tomorrow)
If it works I sent a few copies to the UK

Nzoog - thanks for the additional credits for Anglada and Ojinaga I have them listed in the film but nothing as to who the characters they played. Always glad to get these people IDd. Again the photo you first showed is not Giacomo Rossi-Stuart (aka Jack Stewart). Like you I have no listed him as Jack Stewart - David in the film and in my data base. Keep up the great work amigo.

I have a full set of German lobby cards. I see no one who looks like Robledo and the only person who resembles Giacomo Rossi-Stuart is a scen where Woods standing behind a poker player with three players in front of him. The player on the left is a blonde but I can only see a profile. This is the only actor I can see who resembles Stuart.

I hope this may help.

And imdb has Rossi listed as playing one of the main heavies, Jimmy Nero, and that definitely is not true. That is played by German actor Helmut Schmid. I checked images of him on google to be sure and found this link.

The blond guy in the poker playing scene must be Don, one of the henchmen. He is played by Miguel de la Riva.

Hmmm I seem to be the only one here who thinks that that first picture might actually be Rossi Stuart. He looks different for sure, but maybe its just the different hair and the angle of the picture. Maybe another screenshot or two from Pistoleros Arizona would help.